Iran carries out naval drills encompassing the Strait of Hormuz

Iran's navy has begun a three day war game exercise on Friday in the Persian Gulf, in an expansive area encompassing Strait of Hormuz in the Persian Gulf, to the Sea of Oman and even stretching to northern parts of the Indian Ocean, state media reports. Some reports indicate the games could go on for as much as a week, but all emphasized the "large-scale" nature of the drills in which Iran's navy will showcase the Fateh-class submarine — a domestically built sub carrying cruise missiles and torpedoes, as well as its Sahand destroyer.

The cruise missile-firing capable Fateh, or "Conqueror", was launched for the first time at the start of this week and has been touted as "state-of-the-art" and with the ability to stay underwater for five weeks at a time. Crucially, the large exercises come after last week's US-sponsored Warsaw conference in which both Israeli and US officials made threats of war with Tehran. Indeed during the conference Israeli PM Benjamin Netanyahu openly stated that he was attending the summit with an aim to "advance the common interest of war with Iran."

The games also come at a time when even foreign policy establishment insiders, such as the Council on Foreign Relation's Steven Cook, increasingly acknowledge that the White House's "march to war against Iran" is now "echoing the drumbeats" of the lead up to the 2003 Iraq invasion.

Taken together—the Warsaw conference, Pence’s bullying of the Europeans, Bolton’s threatening video, and the broader background noise in Washington—the events of the past week were familiar in a foreboding way. The chatter about Iran has not become the war fever that gripped Washington in 2002 over Iraq, but the echoes of that year are not hard to miss in the Trump administration’s effort to shape the domestic and international debate about Iran.

Iran's drills in the coming days will further involve battleship exercises and amphibious and anti-amphibious warfare maneuvers, according to Iranian military statements. 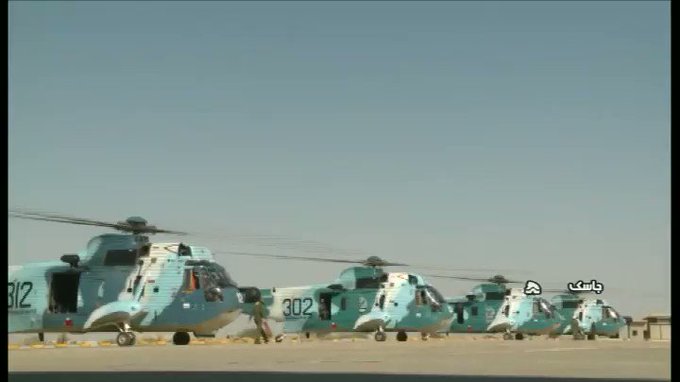 #BREAKING: #Iran Navy is now testing its new weapons including new Fateh-Class submarine during exercise "Velayat-97" in Oman Sea close to #Pakistan territorial waters. First stage of the exercise is a counter-amphibious assault operation for protecting the shores of #Chabahar.

41 people are talking about this
Twitter Ads info and privacy
Though there's general agreement that Iran's navy poses no match of US superiority on the sea and in the skies, Iran seeks to be a significant disruptor of American Persian Gulf capabilities.

Rear Admiral Hossein Khanzadi, commander of Iran's navy, reflected this in comments announcing the inauguration of the games: "For the first time, these weapons will be tested seriously and we can make the maritime region unsafe for the enemy in any way possible," he said. He said the games, formally called "Velayat 97," will begin 2km from the Strait of Hormuz and extend 10 degrees north of the Indian Ocean, in an extended zone some analysts worry may indicate broader intentions regarding Oman and Yemen.

As the Jerusalem Post summarizes of this concern, "In Yemen Iran has supported the Houthi rebels who have used Iranian technology to target Saudi Arabia with ballistic missiles." And recently, "In addition Oman enjoys decent relations with Iran but Oman also hosted Prime Minister Benjamin Netanyahu last year and has sought to play a role in the Israel-Palestinian peace efforts."

In the past, Iranian war games have resulted in close encounters with US warships traversing parts of the Persian Gulf. But this somewhat "routine" occurrence could potentially spark a major incident considering the high level of aggressive rhetoric coming out of Washington at this time.
Posted by seemorerocks at 17:43

Email ThisBlogThis!Share to TwitterShare to FacebookShare to Pinterest
Labels: Iran, Straits of Hormuz