It seems that the news of the potential censorship of Facebook is itself being censored. Apart from RT and friends all I could find on this was an item from BBC who will be batting for the crackdown on free speech.
Watch the video at the bottom of this.

Israel, backed by the US, increases its war provocations against Iran, and even tries to revive WWII wounds by blaming Poland for the Holocaust, and throws its new eastern European alliance into turmoil in the process. Why are Zionist organizations supporting and funding members of the ‘alt-right’ or the far right in Europe?

The British government’s ‘Cairncross Review’ also unveils its new plan for censoring the internet by threatening Silicon Valley firms with fines and penalties if it doesn’t remove what the state deems to be “fake news” and “disinformation” from social media platforms.

Meanwhile, UK Defence Minister Gavin Williamson tries his best to project a tough image to the Russians as he goes bobbing for apples and rum with British Royal Marines in the Arctic, and then calls for EU military unification at this week’s Munich Security Conference. All this and more. 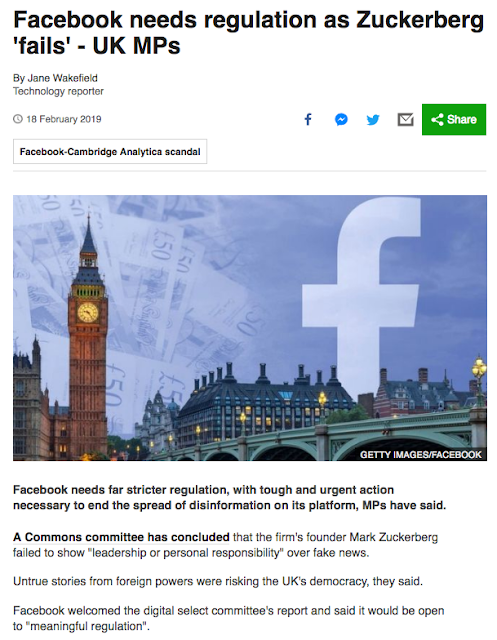 Facebook needs far stricter regulation, with tough and urgent action necessary to end the spread of disinformation on its platform, MPs have said.

A Commons committee has concluded that the firm's founder Mark Zuckerberg failed to show "leadership or personal responsibility" over fake news.

Untrue stories from foreign powers were risking the UK's democracy, they said.

Facebook welcomed the digital select committee's report and said it would be open to "meaningful regulation".

MPs said that what was needed to deal with the proliferation of disinformation online and the misuse of personal data was a "radical shift in the balance of power between social media platforms and the people".

The inquiry into fake news, which lasted more than a year, was conducted by the Digital, Culture, Media and Sport Committee, with much of the evidence focusing on the business practices of Facebook before and after the Cambridge Analytica scandal.....