I have been waiting for this to come out since the weekend. Whilst I do not agree with much of Tommy Robinson's poltics I applaud this because SOMEONE needed to expose the lies and doublespeak of what the BBC has become.


He demonstrates how the BBC worked with a well-funded “anti-fascist” organisation to cajole and blackmail former colleagues of Robinson's to produce dirt on Tommy Robinson in the full knowledge that it was totally fake.

He blows the whole thing open by turning the tables on the BBC by using similar “dirty tricks” as them.


#Panodrama - An Exposé of the Fake News BBC! 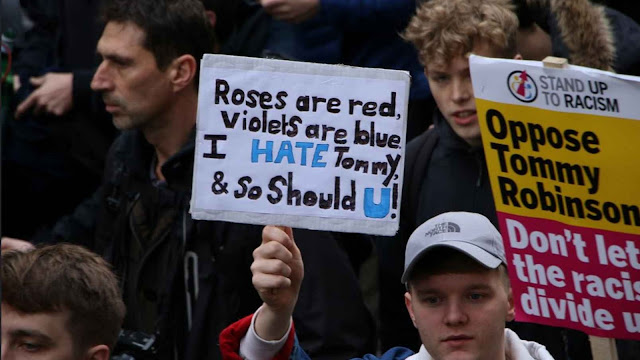 This is the 'far-Left' group cited by Tommy Robinson


The organization Hope Not Hate was founded in the UK in 2004 ‘to provide a positive antidote to the politics of hate’, in its own words. On February 18th it released its annual ‘State of Hate’ Report, described as a ‘guide to what the far right has been up to’. It is uncertain why the far left is excluded from the group's investigation of ‘hate’; indeed, the criteria for inclusion or exclusion of the groups and individuals who figure in this report is unclear. A rag-bag of disparate groups and individuals are included, ranging from men with gripes about feminism, Nazi Satanists, and legally registered political parties.

Hope Not Hate is an influential group, frequently advising the media including TV programs, with its research often cited by academics who may then advise governments, regulators and social media companies. The ‘State of Hate’ report has had considerable media coverage. It paints a gloomy portrait of a rudderless, angry, far right which are allegedly on the rise in the UK, fueled by disenchantment with politics, and where an anti-Muslim rhetoric has replaced an anti-immigrant rhetoric.

But conducting this kind of social research is extremely complex and difficult. It’s hard enough to get a good picture of outward behavior, let alone to determine people’s true motivation and attitudes. Hope Not Hate’s report is methodologically limited and conceptually flawed, yet they exercise no caution in attributing ‘hate’ to thousands upon thousands of individuals.

The report aims to investigate ‘extremism’, despite noting the difficulty of producing a convincing workable definition of extremism as a unified phenomenon. Rather than stopping to consider that this may be because there is no such thing as general ‘extremism’, they forge on regardless, hence grouping together very diverse phenomena. Rarely if ever do they explain how those included in their report merit the description of ‘far right’.

Unsurprisingly, Hope Not Hate fails to find a coherent, unifying, ideology behind the very disparate groups of people whom they investigate. Rather than realizing that this follows from their methods and assumptions, they assume that there must be something that binds these groups and individuals together, and assume that it’s raw, angry, negative emotion. To back up this claim, descriptions are given of the ‘irate’ crowds at various rallies. But I have attended a couple of the rallies mentioned in this report, and simply do not recognize the accounts of the mood of the crowds. This is quite simply very flawed research, where conclusions are drawn which badly overreach anything that could be safely concluded from the chosen methods.

By overstepping the limits of its research, Hope Not Hate is able to present a picture of a large ‘far right’ threat. But with so little to hold together the groups and individuals collected here, this is less than convincing. There is good reason to keep an eye on those who pose genuine threats of violence and serious discord. But for this very reason, it’s a poor strategy to base claims on weak or exaggerated research. And how large are such threats in the UK? It’s not clear. For instance, the report’s map of demonstrations indicates that the National Front can muster only between 10 to 30 people to turn out to a rally. It would be better if nobody turned up, but this is hardly a mass phenomenon. Nonetheless, the media are quick to lap up the thrilling ‘finding’ that a hate-filled mob is rising in the UK. Conveniently, such a finding justifies the funding and attention given to groups such as Hope Not Hate.

The lack of concern for truth is seen in the report’s oft repeated talk of ‘narratives’; in other words, concern with how things are presented, rather than what is in fact the case. This is a critical point, for it indicates a major flaw of their research: searching questions are never asked about any rational basis for people’s beliefs, attitudes, and actions. Indeed, Hope Not Hate repeatedly shows cynical skepticism about motivations, never missing a chance to attribute ‘hatred’ or to label people. For example, many of those protesting last year’s imprisonment of Tommy Robinson on a charge of contempt of court, who are included here as ‘far right’, were in fact mainly concerned with the now proven flaws in the legal process. Hope Not Hate does nothing to investigate further or to nuance their unflattering descriptions of thousands of individuals concerned about injustice. In this report, Hope Not Hate also decry concern for free speech or for the rights of gays by the so-called ‘far right’ as nothing other than cynicism, again with a lack of rigor that betrays a bias of their own.

Data science examining internet traffic is a trendy new toy that many researchers are besotted with, but as with any new tool, especially one linked to complex technology, there’s a danger that claims will be exaggerated. The frequency with which certain search terms are accessed may perhaps give us some useful information. Or maybe not; one must exercise a bit of common sense. While anti-Semitism is an evil which appears to be growing, this report is very quick to draw conclusions. On a section on ‘Anti-Semitism in numbers’, this report tells us that the UK is third in the world for searches for the term ‘Zionism’. But does this indicate a problem with anti-Semitism in the UK? Maybe yes, maybe no. For even higher for the frequency of searches for ‘Zionism’ than the UK, stands Israel. Unless Israel is jam packed with anti-Semites, maybe Hope Not Hate are drawing simplistic conclusions without adequate foundation.

One of the first lessons for social science research is that correlation is not causation. Yet this report consistently falls into the post hoc ergo propter hoc fallacy. Data showing that certain social media accounts or internet sites have been accessed by certain people prior to certain actions, are eagerly taken to indicate the source of radicalization, with no further nod to the extreme complexity of belief and attitude formation, and of individual motivation. But this all goes to whip up the claims that far right extremists are being goaded on by leading figures of ‘hate’. Perhaps there are problems here; but Hope Not Hate does not demonstrate this in this report.

The best social science research resting on quantitative data attempts, where possible, to back this up with qualitative data. The aim should be to check that any ‘scientific’ claims about an individual’s beliefs and motives at least take into account that individual’s own self-perceptions. But over and over, this report fails to note difficulties with their presentation of individuals as ‘far right’, as ‘extremists’, or as ‘motivated by hate’. Just one example: Sharia Watch UK gets into the ‘State of Hate’ report as having an ‘anti-Muslim ideology’. But their own website states that they are concerned with the elements of Sharia law which are discriminatory and violent, particularly towards women and girls, among other concerns which show an emphasis on human rights. Since most of the women and girls who will suffer under Sharia law are Muslim, it seems odd indeed to describe Sharia Watch UK as ‘anti Muslim’ without taking further steps to justify this serious and defamatory claim.

But then, Hope Not Hate consistently and persistently conflates ‘anti Muslim’ with ‘anti Islam’. This happens throughout its report and shows an inability to distinguish Muslims (people) from Islam (an ideology and set of practices). Critique of a set of beliefs may be based on reason, but the grounds for criticism of Islam are never probed in this report. By swapping ‘Islam’ with ‘Muslim’, ‘hatred’ of people is substituted for what are quite possibly reasonable grounds for criticism of a religion. This failure to examine the truth of claims about Islam reaches the heights of absurdity when the report firstly decries groups such as Gays Against Sharia for criticism of Islam; then many pages later, decries the many Muslims who consider that homosexuality should be illegal, for their attitudes towards gays. So… do Gays Against Sharia have a point, or not? Hence Hope Not Hate’s major claim that an ‘anti Muslim’ rhetoric dominates the allegedly rising ‘far right’ lacks credibility.

If the UK really is facing a major threat from hate-fueled, extremist political groups, we need to understand the threat. This report simply has too many flaws and biases to give an accurate picture.