Haitian protesters seek Russian help against the US 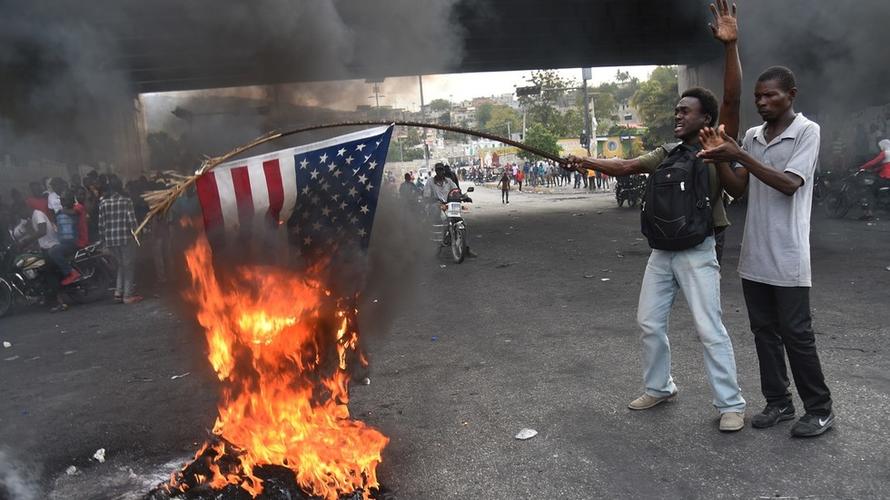 A man identifying himself only as Bronson, a Haitian protester, burns the US flag on February 15, via the APF.


A French language AFP report over the weekend featured surprising photographs of Haitians burning American flags as the unrest and chaos continues especially in the Haitian capital of Port-au-Prince.

Major cities throughout Haiti have for days essentially been on "lockdown" due to civil unrest and mass protests demanding that President Jovenal Moise step down over charges of corruption and rampant inflation under his watch — yet unlike similar unrest happening hundreds of miles due south of the small Caribbean country in Venezuela, Washington has stood in support of the president, who since 2017 has found himself facing a flood of popular anger surrounding the PetroCaribe scandal.

Though the mass protests have multiple layers in terms of motives, stemming mostly from skyrocketing inflation and the government's failure to hold to account leaders caught embezzling from a multi-billion dollar Venezuelan program that sent discounted oil to Haiti, or the PetroCaribe affair, a number of the protest gatherings are distinctly anti-American in their rhetoric and symbolism, while at the same time being pro-Russian.

Reflecting the global geopolitical divide over the crisis in nearby Venezuela, the AFP report describes some of the anti-American elements to the protests as follows (based on a rough translation from the French):

A group of protesters burned an American flag Friday afternoon in the heart of the Haitian capital Port-au-Prince, calling for help from Russia to solve the crisis that paralyzed the country for over a week.

“Down with Americans, long live Putin!” the roughly 200 demonstrators in the capital Port-au-Prince chanted, some holding up printouts with the face of the Russian president.

The protester who set the American flag on fire, calling himself Bronson, told the AFP, “We are asking Russia, Venezuela and China to take a look at the misery we live in here.” Bronson and the group of protesters said the Haitian political system had for too long been under the thumb of Washington, and appealed to Russia and China for help.

Bronson said further, as related by the AFP:

"We mean that we divorce completely Americans: we took too much occupation in the hands of the United States, we can not," said Bronson, a small group protester who set the flag on fire. 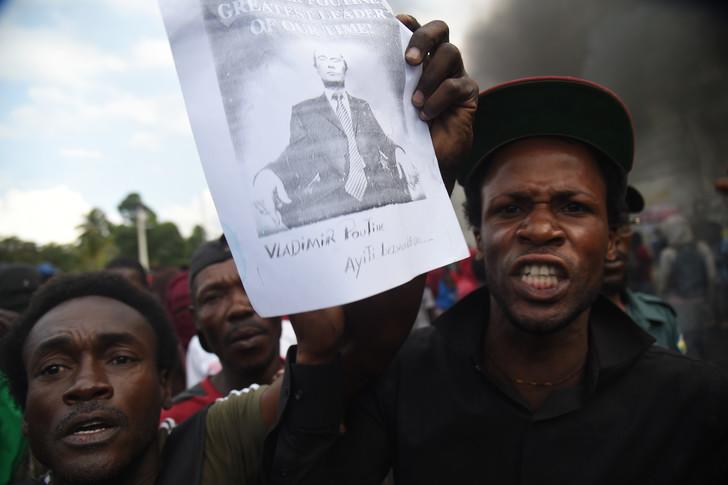 According to some 200 participants in the rally, former Haitian President Michel Martelly and his successor, the current head of state Jovenel Moise, were placed in power by the United States.

Indeed over the weekend the White House said it is sticking by Moise's leadership, and called for calm in the streets.


Haitian protesters appealing the Russian president Putin for help, via the AFP.
Starting weeks ago Washington began putting immense pressure on Port-au-Prince to break ties with the Maduro regime in Venezuela, in recognition of self-styled "Interim President" Juan Guaido.

These pressures were successful and the Haitian government caved earlier this month, fueling the rage of many Hatians in the street, many of which were already angered over the impact that Washington's oil sanctions on nearby Venezuelea are having on Haiti.

Thus Jovenal Moise's government so easily succumbing to Washington against Maduro was the last straw for many in a politically complex scandal which has grown for years as a result of the Petrocaribe deal, which began in earnest when it was revealed in 2017 that almost $4bn in funds earmarked for social development went missing, widely assumed to be the result of corrupt officials still holding positions of power within the Moise government ranks skimming on a mass scale. 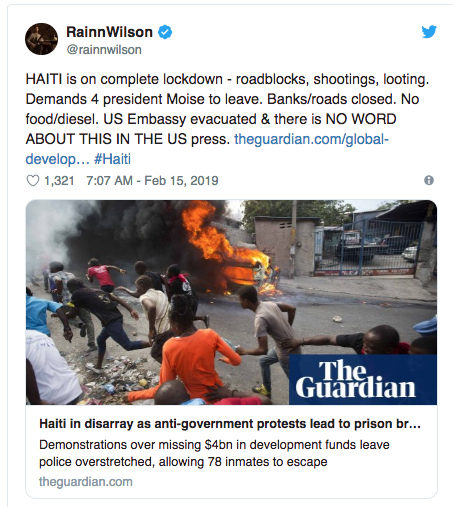 Meanwhile the US State Department urged all American citizens out of the country over the past days, and issued a no-not-travel advisory due to "crime and civil unrest." This was followed on Saturday by national security adviser John Bolton issuing a statement for all sides in Haiti to "respect and protect their democracy" — a bit ironic considering he spent the rest of the day tweeting regime change related messages targeting Venezuela's Maduro.


He revealed in the tweet that he met with Haitian Foreign Minister on Friday "to express the United States’ enduring support for and friendship with Haiti." He further urged "all of Haiti’s political actors to respect and protect their democracy, engage in dialogue, and put an end to the political violence."

This is certainly unlikely to mitigate the growing anti-American sentiment present in the protests, which have also included violent clashes with police, resulting in several deaths.