The Rothschild family took over Charlie Hebdo in December

I'm not normally given to conspiracy theory regarding the Roithschilds and the NWO, but I found this interesting 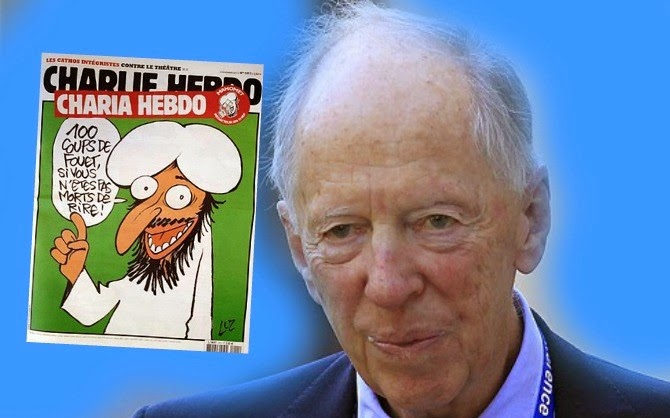 According to reports, the Dutch business magazine "Quote" means the Rothschild banking family took over the French satirical magazine Charlie Hebdo. The editors of the magazine Critical religion had been attacked on 01/07/2015 by several Islamist bombers. In this case, 13 people died, including the chief editor of the magazine. According to "Quote" there have been discussions  about the acquisition of the publishing company and ultimately a take-over was op;ted for.

"There were some serious objections to the takeover frommy uncle Baron Edouard de Rothschild. Some relatives wanted to block the purchase because that would make us a political force in the media . We want to void this at all costs. We have nothing to do with politics. Ultimately, the critics in the family were overruled.”

The interview was about the purchase of the French newspaper "Liberation", which now published with the satirical magazine Charlie Hebdo. A million was spent on this. The magazine was launched on Wednesday with a million copies and reached worldwide fame. According to "Quote" Philippe de Rothschild has had a majority stake in the newspaper chain which incorporates the Charlie Hebdo editorila baord is now housed, since December, . The interview was published on 18/12/2014.

Rothschild is the name of a Jewish family whose roots from 1500 can be found in in the German archives. Member of the family have been known since the 18th century, mainly as bankers. They were among the 19th century's most influential and important financiers of European countries. The parent company of the banking business was MA Rothschild & Sons in Frankfurt. The family continues to serve on various successor institutions in the banking business, mainly in  the area of investment banking and asset management. Today the banking family plays a much smaller role. The banks and institutions that are still family owned, are hardly related any more and form little market share.

Nevertheless, the family is one of the richest in the world.


The original article is HERE