Reports from Indian and Pakistani media

The dogfight between Wing Commander Abhinandan Varthaman and a Pakistan Air Force over the skies of the Nowshera in Rajouri district of Jammu Province lasted just 90 seconds. 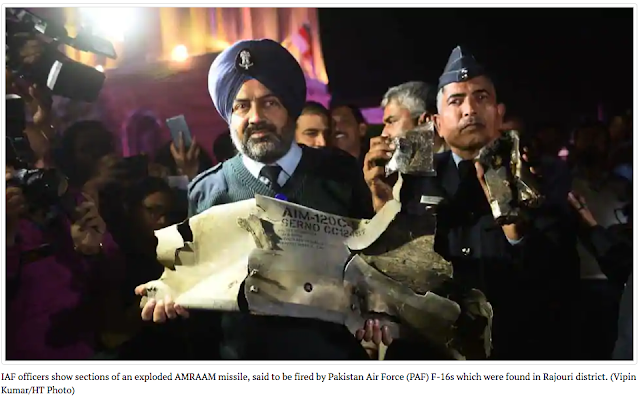 The dogfight between Wing Commander Abhinandan Varthaman, flying a Russian made MiG-21 and a Pakistan Air Force US made F-16 over the skies of the Nowshera in Rajouri District of Jammu Province on Wednesday lasted just 90 seconds, a senior Indian Air Force (IAF) officer said on condition of anonymity.

The 90 seconds will perhaps go down in the history of aircraft encounters.
In the 90 seconds, the Pakistani fighter fired two US AMRAAM missiles and an aging MiG-21 shot down a fourth generation F-16 fighter — a feat that will go into the history books considering the asymmetry between the two fighters. Soon after, the MiG, piloted by Wing Commander Abhinandan Varthaman was shot down.

The AMRAAM missiles are beyond visual range missiles, which means they can be fired from a stand-off distance. They are also all- weather and day and night capable missiles. Parts of the AMRAAM missile were recovered by India and made public in a press conference in New Delhi.
“Only F -16 aircraft can fire AMRAAM missiles. These have been used in violation of conditions imposed on Pakistan by the United States when these were sold,” a second senior IAF official who did not want to named said.
Those conditions state that the fighters can’t be used in offensive actions but only defensive ones.
On Wednesday, the incoming pack of 12 Pakistani fighters, comprising US-made F-16, French-made Mirages and JF-17 fighters made in Pakistan were detected by an Airborne Warning and Control System (AWAC) hovering inside India. Pakistan was responding to air strikes on a Jaish-e-Mohammed terror camp in Khyber Pakhtunkhwa.
Immediately, fighters from Avantipora, Srinagar and other airfields were scrambled. The MiG-21 being the closest, approached the PAF fighters, a senior official in the security establishment who did not want to be named said. From a distance, the entire dogfight was picked up the AWAC and also other Indian fighters.
The MiG-21 locked on to the F-16 when it was flying at about 15000ft and the F-16 at about 9000 ft. The MiG-21 started diving to get a better shot at the F-16. The F-16 took evasive measures. It went into a steep climb,” a second senior official in the security establishment said and added that “the F-16 climbed to about 26000 ft.”
By this time the MiG-21’s pilot had skillfully manoeuvred his aircraft behind the PAF fighter, positioning itself at a sixty-degree angle for maximum impact. It fired a Russian made Vympel R-73 (NATO name AA-11 Archer) missile hitting the F-16. Even as R-73 missile was closing into its target, the wingman of the F-16 now in the crosshairs moved in. He fired his weapon and hit the MiG-21. “No radio call from the MiG -21 was received,” the official said.
Rarely, if ever, has a MIG-21, designed and developed in the 1960s at the height of the cold war, shot down an F-16. The MiG-21 which shot down the F-16 on Wednesday joined the Indian Air Force in 1980s. “The MiG-21’s were upgraded, but the design is the same. It takes immense skill to out-manoeuver a fourth generation fighter. It is similar to taking on a BMW automobile in a race , with a Maruti-800,” a test pilot with the IAF who did not want to be named said. 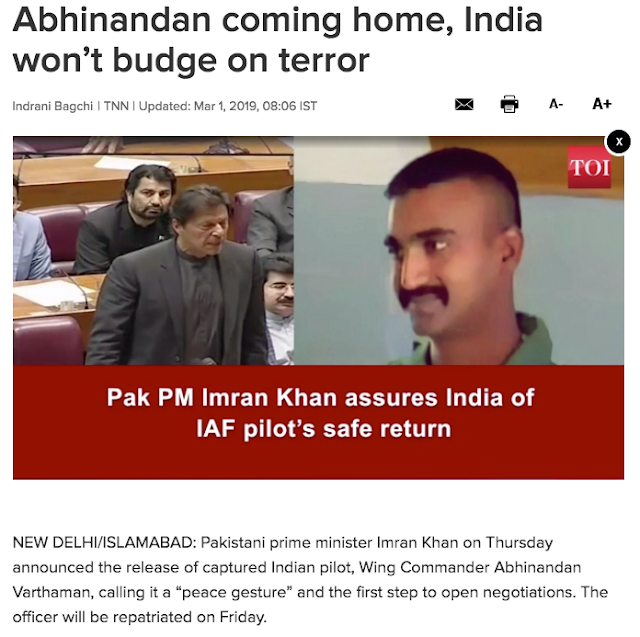 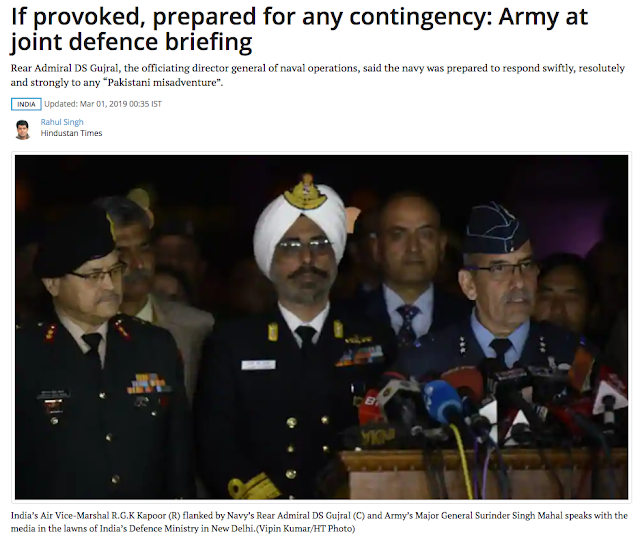 
This is what is coming out of Pakistan: 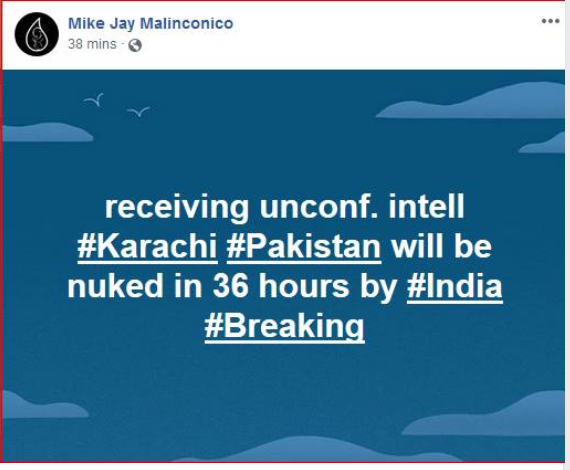 Not from Indian media but reflects what was reported last night. Rhetoric vs reality? 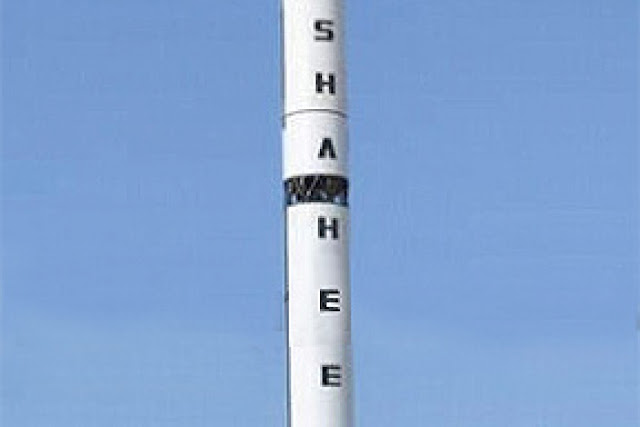 At about 8:25 PM eastern US time last night, word got out that spy satellites had picked-up Transporter-Erector-Launcher (TEL) vehicles inside Pakistan, being removed from their storage facilities with missiles on them.

Further analysis REQUIRED visual verification and that verification came about an hour later from resources on the ground inside Pakistan: the missiles are the Shaheen-III medium Range Ballistic Missile, armed with NUCLEAR WARHEAD.

These particular TEL's were in storage Depots assigned to Pakistan's National Command Authority and that is the NUCLEAR arm of their government.

This information was revealed LIVE on the air during the Hal Turner Radio Show on WBCQ, WRMI, and KYAH radio.

What was NOT known (at that time) was whether these TEL's were being moved out to USE, or to protect from being destroyed by possible Indian attack? Or was it just a "message" because Pakistan knew the missiles would be seen by spy satellites?

At 3:50 AM ET today (Thursday) intel sources confirmed directly that analysts see the TEL's have been moved to what would be considered LAUNCH locations. As such, the Intel Community believes Pakistan intends to USE Medium-Range-Ballistic-Missiles with nuclear warheads.

If fired from southeastern Pakistan the Shaheen III can hit India's Nicobar and Andaman Islands which are west of Thailand. India is believed to have placed nuclear assets there.

At present, it is not known if Pakistan intends a first strike, or if Pakistan fears a ground invasion which they know they are incapable of countering due to vastly superior India armed forces numbers. The chart below shows that India is FAR superior to Pakistan in all the ways that matter: 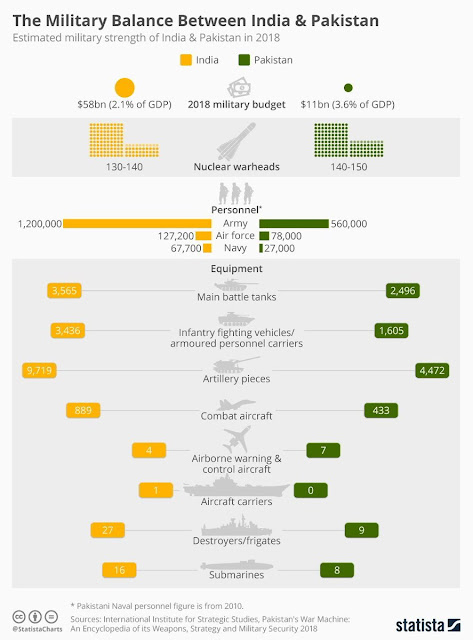 It is believed Pakistan fears a ground invasion because yesterday, India turned over to military control, their National Highway 1-A; the major east-west corridor in the far north of India. There is only one reason to do that: create a Logistics chain to support a ground invasion to take back all of Jammu and Kashmir from Pakistan control.


Overnight, Pakistan took what are seen as unusual and decisive actions against camps that India regards as TERRORISTS. Pakistan attacked certain camps, and made arrests of people allegedly tied to the terror group Jaish e-Muhammed.


Just hours ago, Pakistan Prime Minister Khan told a joint sitting of Parliament that Pakistan wants the situation to de-escalate and would be RELEASING the captured India fighter jet pilot whose plane was shot down by Pakistan.


For its part, India does not seem interested at all in these developments. India says their air strike against Jaish e-Muhammad terror camps was targeted retaliation for a terror attack against India on February 14 which killed forty (40) India Police Officers. India also says that Pakistan's response to those air strikes was to target India military sites and military gear. In other words, an act of war.


As this story publishes at 10:33 AM ET, there remains constant shelling between Pakistani and Indian positions along the LoC.


Said one military intel source "Every time I try to think rationally about this situation, I remember that the Pakistanis protected Osama Bin Laden for years in the middle of a neighborhood surrounded by military staffers."

This is from the Times of Islamabad which seems to be far more tightly controlled than the Indian media. There is also no English-language television to draw on


ISLAMABAD - Prime Minister Imran Khan has urged the Indian leadership not to push for escalation as war is not solution to any problem. 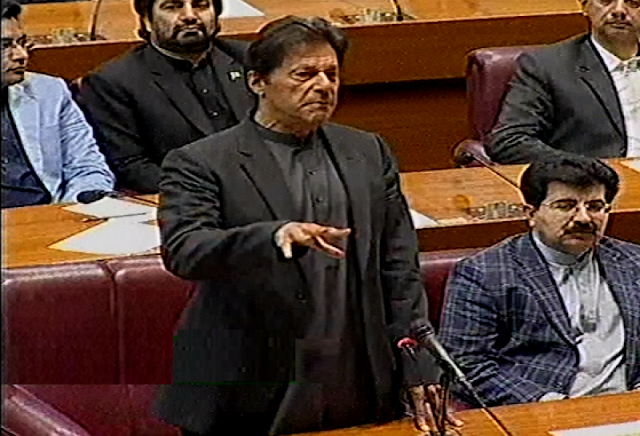 
Pakistan PM Imran Khan announces to release IAF captured pilot as a goodwill gesture
Making a policy statement at the joint sitting of the parliament in Islamabad today, he warned if India moved ahead with the aggression, Pakistan will be forced to retaliate.


He said Pakistan is a peace loving country and desires peace and stability in the region. He said that as a peace gesture, the Indian pilot captured yesterday will be released tomorrow.


The Prime Minister urged the international community to play its role in de-escalation for peace and stability in the region.

The Prime Minister however made it clear that our desire for de-escalation should not be misconstrued as our weakness. He pointed out that our armed forces are battle hardened and they are fully prepared to respond to any aggression.

They are not reporting on this 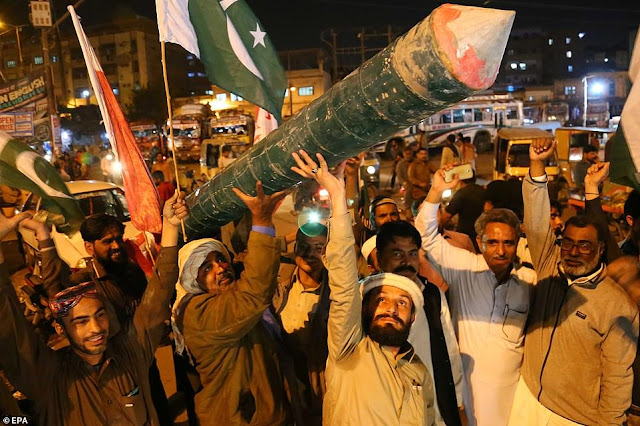 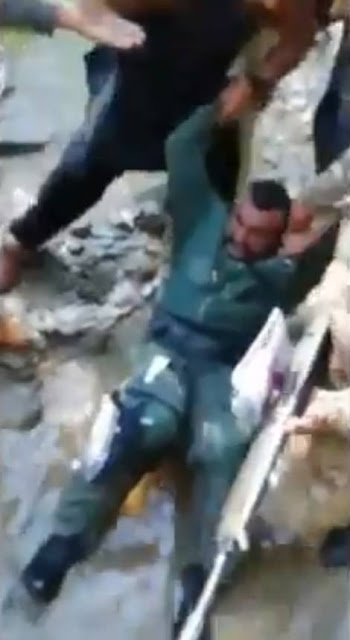