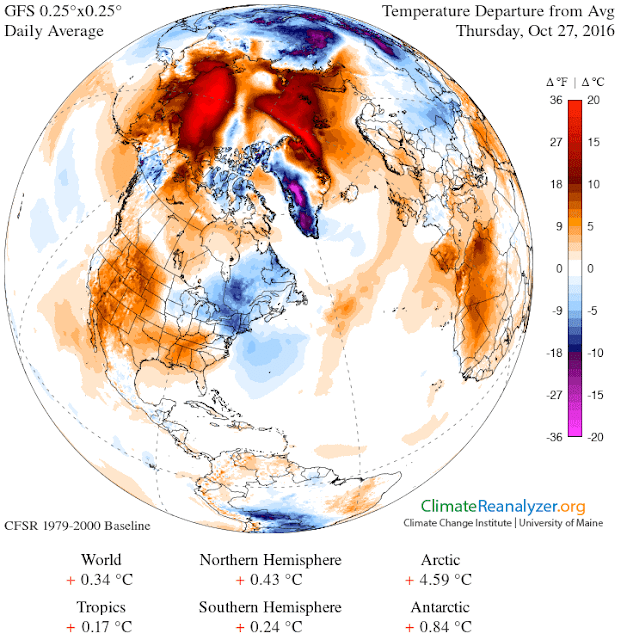 Our truly dramatic October Plunge continues with no end in sight, into record low territory for annual average extent (as well as for daily extent, volume and area): 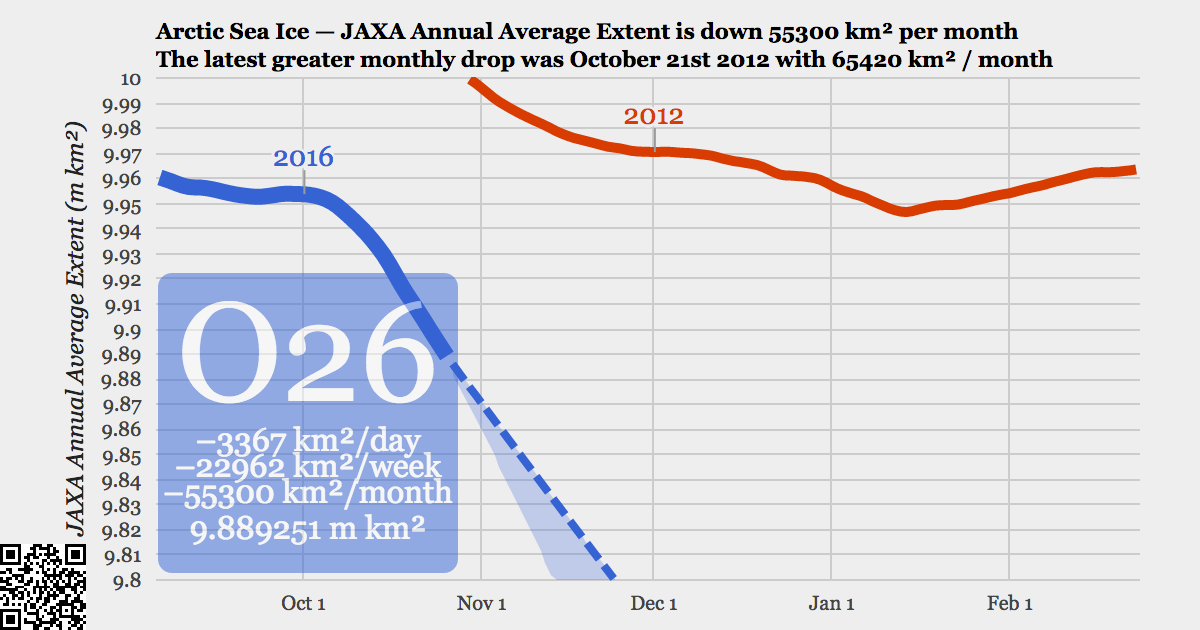 Eyeballing the graph, the blue dotted line and confidence interval suggest we'll be below 9.8 million km² by the end of November, so dramatically lower than both 2012 in autumn and 2013 during spring. We've truly entered the dreaded uncharted waters, where — literally — anything can happen. Including annual and ever longer Blue Ocean events. We're into the great wide open. Plot shows annual average* extent, not daily extent.

To visually present the new all–time record low for annual extent, the above graph has been laterally expanded all the way back to January 1st. There you can clearly see the May 15th previous record on the pink 2013 graph: 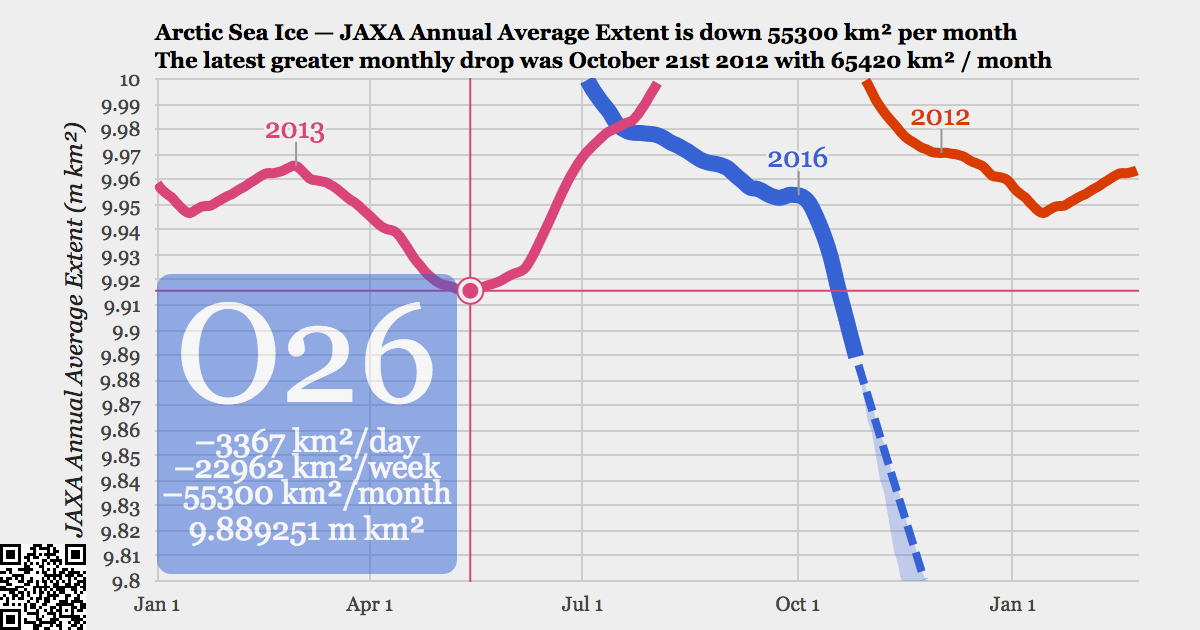 Annual Average Extent (AAE): From the last update at about 9.9 million km² on 23rd October, we've lost about 10600 km² from the AAE in just 3 days, which was within the expected timespan of October 26h.

JAXA Annual Average Extent for 2015 as a whole was 4th lowest at 10.11 million km², and since Mid–October we've been lowest ever at about 9.9 million km² and setting new all–time low records every day. For the first time in 4 years we may also end up lowest ever on December 31t.

We're now already into uncharted waters. Some very interesting times ahead, with the best chances yet for a Blue Ocean event during the next ten months.

We're in the last week of October, and yet the temps are high and the storms still raging due to record levels of open water. And though extent was up 58 k km² yesterday for the entire Arctic, CAB area was down 39 k km², and according to JAXA & Wipneus, all–Arctic sea ice volume was down by 318 km³ to 3885, the lowest sea ice volume since October 15th. Thickness is also down 5.8 cm to 0.8 meters, the lowest in all of 2016, and, as far as I can see, since December 2012.

I should add that from October 26th in 2012, the loss of thickness over the following month was 30.5 cm, which would take us all the way down to less than half a meter in 2016, so really dramatically thin ice cover in a winter season regularly visited by fierce storms in the Arctic Ocean.

0.5 meter ice means a winter storm could rip it all apart, and waves & swells can still work on the great Disintegration Project all through autumn & winter. Export through Fram, Nares Strait & the Canadian Arctic Archipelago can and will likely also carry on through winter.

All in all, this looks really catastrophic for ice. On the upside, winter will not be a bore for faithful watchers of Arctic sea ice.

*) Don't get it? Just about once every month there is a new person actively voicing their concern that this is all wrong. I've totally messed up and I don't even know ice melts in summer and ocean freezes over in autumn and winter. I'm not a teacher, so I can only explain the concept of an annual average scientifically. I don't know what motivates the person in question to actually go and read the mathematical explanation. I usually don't know that person at all. I've been publishing annual average graphs since 2014, and I can assure you they are not wrong. Mostly, the monthly concerned person didn't get the 'annual average' part.

Or they thought it wasn't essential to the understanding of the graph. It is.


PS: For the 7–year outlook, have a look at this post.

in the lamp on a floor of dead moths 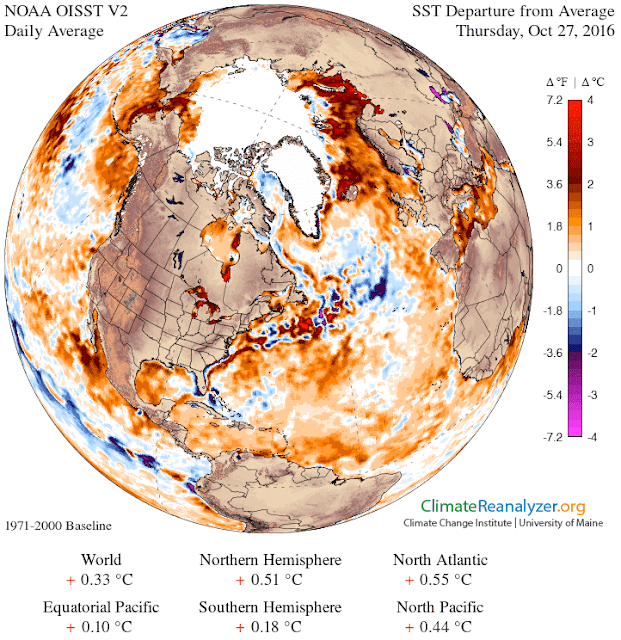