The neo-cons bay for blood 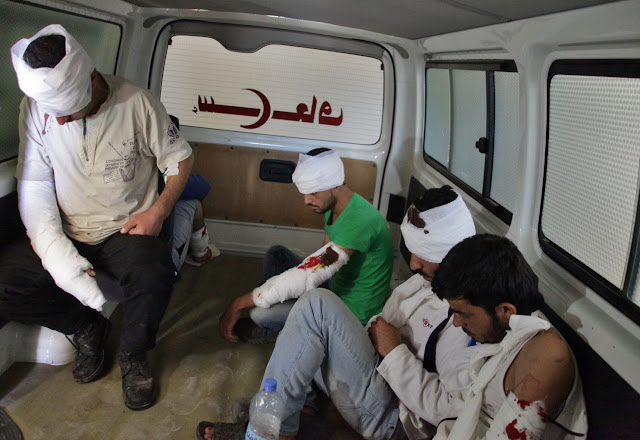 JohnAllen, a retired U.S. Marine general, led the International Security Assistance Force in Afghanistan from 2011 to 2013 and the international coalition to counter the Islamic State from 2014 to 2015. Charles R. Lister is a senior fellow at the Middle East Institute and author of “The Syrian Jihad: Al-Qaeda, the Islamic State and the Evolution of an Insurgency.”

For 5½ years, the Syrian government has tortured, shot, bombed and gassed its own people with impunity, with the resulting human cost clear for all to see: nearly 500,000 dead and 11 million displaced. Since Russia’s military intervention began one year ago, conditions have worsened, with more than 1 million people living in 40 besieged communities. Thirty-seven of those are imposed by pro-government forces.

While subjecting his people to unspeakable medieval-style brutality, Syrian President Bashar al-Assad has sabotaged diplomatic initiatives aimed at bringing a lasting calm to his country. The most recent such diplomatic scheme was trashed not just by Assad, but also Russia, whose aircraft were accused of subjecting a U.N.-mandated aid convoy to a ferocious two-hour attack in September.

Since then, at least 2,500 people have been killed and wounded in eastern districts of Aleppo, amid horrendous bombardment by Syrian and Russian aircraft, and Russia cynically vetoed a U.N. resolution that would have prohibited further airstrikes in the city.

It is time for the United States to act more assertively on Syria, to further four justifiable objectives: to end mass civilian killing; to protect what remains of the moderate opposition; to undermine extremist narratives of Western indifference to injustice; and to force Assad to the negotiating table. The United States should not be in the business of regime change, but the Assad clique and its backers must be brought to account before it is too late. The world will not forgive us for our inaction.

The consequences of continued inaction are dreadful. U.S. policy has never sought to decisively influence the tactical situation on the ground. Unrealistic limitations on vetting and a policy that prohibited arming groups to fight the regime left us unable to effectively fight the Islamic State or to move Assad toward a transition. U.S. policy and strategy on Syria had a major disconnect, in being focused militarily on a group that was a symptom of the civil war without any means to achieve the stated policy objective: Assad’s departure.

The hole in this strategy could only have been filled by a comprehensive train-and-equip program for moderate Syrians to fight the Islamic State and decisively resist regime forces. Sadly, we have allowed this connective tissue between our counter-Islamic State strategy and our policy to remove Assad — the moderate Syrian opposition — to come under sustained attack by the regime and Russia.

For years we’ve said there can be no military outcome in Syria, but the Russians and their allies have pushed the military dimension of the crisis to strengthen the regime’s political position and, in the name of fighting “terrorism,” to systematically eliminate the opposition, including moderate Syrians we judged should be part of the political process of transitioning Assad out. These objectives were derived from our unwillingness to tangle with the regime, and now also the Russians.

The administration’s condemnation of Russia, and its forecast of a Vietnam-like morass for Moscow, seem a misunderstanding of Moscow’s calculus. Russia will determinedly protect its interests by any means, including attacking civilians and U.N. aid convoys. The expectation that Russia will tire of its Syria “quagmire” and become diplomatically pliable ignores reality. Russia has shown a remarkable capacity to dig in behind bad policy and fight under adversity. Ultimately, Vladimir Putin’s Russia must be — or at least seem to be — on the ascendancy, as it is in Ukraine, along NATO’s frontier, in Syria and even in Libya. Russia’s repaired relationship with Turkey and improved ties elsewhere further complicate U.S. policy.

Ultimately, this leaves us only two options. First, the United States should encourage and join its European allies in imposing an escalatory set of economic sanctions against Russia and bodies and individuals supporting its military and paramilitary activities in Syria, Ukraine and elsewhere.

The second option is one the Russians believe the United States will never do: Escalate the conflict. The United States must challenge the status quo and end the regime’s war crimes, by force if necessary. This need not require some major pronouncement. Indeed, for now, a quiet warning may be more effective, since a major public announcement would almost certainly polarize the situation further.

For a start, the United States must save Aleppo. Damascus, Moscow and Tehran are razing the city to prepare for an eventual ground assault. As both the CIA and Pentagon have concluded, an opposition loss in Aleppo would severely undermine the United States’ counterterrorism objectives in Syria. The city’s symbolism and strategic value are unmatched, and allowing it to fall would dramatically empower extremist narratives. Groups linked to al-Qaeda would reap the rewards of our shortcomings.

To save Aleppo, the United States and its allies must both accelerate and broaden the provision of lethal and nonlethal assistance to vetted moderate opposition groups. This assistance would aim to empower other frontlines in northern and southern Syria to force pro-regime forces to divert attention from Aleppo. Opposition groups should also be provided with the means to bombard regime military airfields, many of which already lie within indirect fire and artillery rocket range.

Simultaneously, the United States must use existing multilateral mechanisms to push for a new cessation of hostilities in Syria in which flagrant violations will be met with targeted U.S. military consequences. Should such an agreement prove impossible due to the likely intransigence from Damascus and its supporters, the United States should gather a “coalition of the willing” to credibly threaten military action against Assad’s military infrastructure.

Initiating such a sequence would almost certainly result in the eventual use of targeted, punitive force in Syria. Any action should target Syrian military facilities and assets involved in supporting the bombardment of civilians, such as military airfields, aircraft, weapons stores and artillery positions. We should expect the possible intentional co-mingling of Syrian and Russian forces and assets as a deterrent. While this may complicate targeting strategies, we should not miss the opportunity to hit offending Syrian elements and units, while sustaining counter-Islamic State operations elsewhere.

In addition, the United States should consider establishing and supporting a task force of regional Special Operations forces, which could play an advisory role in assisting vetted opposition groups in attacking regime assets.

The credibility of the United States as the leader and defender of the free world must be salvaged from the horrific devastation of Syria. It is not too late to enforce international law and norms. However, we cannot wait for a new administration in Washington. Events are moving too quickly. Bashar al-Assad is not the solution to the Syrian crisis, and he is the least-qualified possible partner in a fight against terrorism, having spent much of the past 16 years aiding and abetting al-Qaeda and, it would appear, the Islamic State as well. Action certainly presents risks, but to allow events to continue to unfold as they are means raising the cost yet further for a future, inevitable U.S. intervention.