This is radical and must be heard

MICHAEL MOORE: TRUMP’S ELECTION WILL BE THE BIGGEST “F**K YOU” IN HISTORY 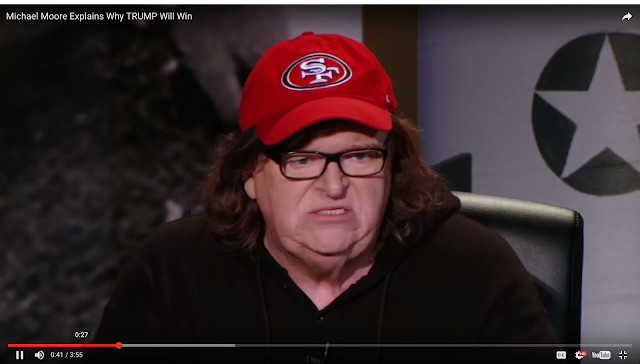 
During a speech for his new one-man stage performance Trumpland, Michael Moore remarked that the election of Donald Trump will be the “biggest f**k you in history” to the elites that have ruined the lives of middle class Americans.

Moore began by saying he knew a lot of people in Michigan who were going to vote for Trump who “were not racists or rednecks” but were sick of their jobs being offshored to places like Mexico.

Trump’s promise to slap a 35% tariff on Ford cars made in Mexico and sent back to America was “music to the ears of people in Michigan and Ohio and Pennsylvania and Wisconsin,” added Moore.

“Whether Trump means it or not is kind of irrelevant because he’s saying the things to people who are hurting and it’s why every beaten down, worthless, forgotten working stiff who used to be part of what was called the middle class loves Trump,” said Moore, arguing that Trump was the “human molotov cocktail that they’ve been waiting for – the human hand grenade that they can legally throw into the system that stole their lives from them.”

According to Moore, these disenfranchised Americans have lost everything they have but still enjoy the great equalizer – the right to vote – and they will utilize it by putting “a big f**king X in the box by the name of the man who has threatened to upend and overturn the very system that has ruined their lives – Donald J. Trump.”

Asserting that his voters will “get to blow up the whole God damn system,” Moore concluded by saying, “Trump’s election is going to be the biggest f**k you recorded in human history, and it will feel good.”