Gorge Soros and the American election


Yesterday I posted a video by Bill Still discussing this interview with George Soros in late August.

Within a very short period of time that video was removed from You Tube so I replaced it with another version.

When I checked this morning it too had disappeared.

I am doing my best to ensure that this revealing interview is not totally disappeared so I have transferred what I can find onto an audio file.

POSTSCRIPT: It appears that the video concerned was removed by Bill Still after he discovered it was FAKE.  He describes why this is so in this video.

I have had the wool pulled over my eyes several times in the past few days - a sign of the times. 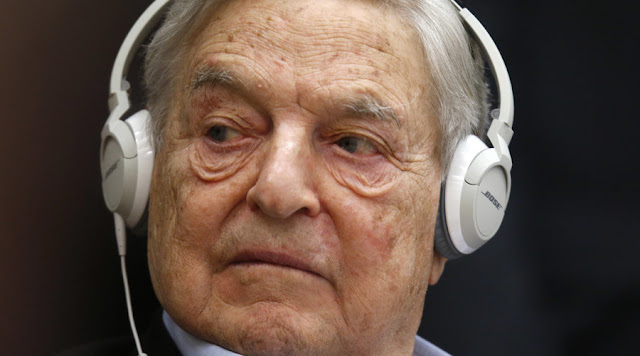 Here is my version of what he says:

Do you think Hllary Clinton is a done deal?
Yes

Listen to "Soros Says Trump Will Win Popular Vote, But Hillary as President a “Done Deal”" on Spreaker.


This might go some way toward explaining how George Soros knows the results of the electionin advance.

Submitted by Joseph Jankowski of Planet Free Will

A U.K. based company that has provided voting machines for 16 states, including important battleground states like Florida and Arizona, has direct ties with billionaire leftist and Clinton crusader George Soros.

With recent WikiLeaks emails showing that Hillary Clinton received foreign policy directives and coordinated on domestic policy with Soros, along with receiving tens of millions of dollars in presidential campaign support from the billionaire, concerns are growing that these shadowy players may pull the strings behind the curtains of the upcoming presidential election.

As Lifezette reports, the fact that the man in control of voting machines in 16 states is tied directly to the man who has given millions of dollars to the Clinton campaign and various progressive and globalist causes will surely leave a bad taste in the mouth of many a voter.

The balloting equipment tied to Soros is coming from the U.K. based Smartmatic company, whose chairman Mark Malloch-Brown is a former UN official and sits on the board of Soros’ Open Society Foundation.

According to Lifezette, Malloch-Brown was part of the Soros Advisory Committee on Bosnia and also is a member of the executive committee of the International Crisis Group, an organization he co-founded in the 1990s and built with funds from George Soros’ personal fortune.

Browns ties also intertwine with the Clintons as he was a partner with Sawyer-Miller, the consulting firm where close Clinton associate Mandy Grunwald worked. Brown also was also a senior advisor to FTI Consulting, a firm at which Jackson Dunn, who spent 15 years working as an aide to the Clintons, is a senior managing director.

t When taking that into account, along with the poor track record Smartmatic has of providing free and fair elections, this all becomes quite terrifying.

An astonishing 2006 classified U.S. diplomatic cable obtained and released by WikiLeaks reveals the extent to which Smartmatic may have played a hand in rigging the 2004 Venezuelan recall election under a section titled “A Shadow of Fraud.” The memo stated that “Smartmatic Corporation is a riddle both in ownership and operation, complicated by the fact that its machines have overseen several landslide (and contested) victories by President Hugo Chavez and his supporters.”

“The Smartmatic machines used in Venezuela are widely suspected of, though never proven conclusively to be, susceptible to fraud,” the memo continued. “The Venezuelan opposition is convinced that the Smartmatic machines robbed them of victory in the August 2004 referendum. Since then, there have been at least eight statistical analyses performed on the referendum results.”

“One study obtained the data log from the CANTV network and supposedly proved that the Smartmatic machines were bi-directional and in fact showed irregularities in how they reported their results to the CNE central server during the referendum,” it read.

With such suspicion and a study which claims to prove that the U.K. firm’s equipment tampered with the 2004 Venezuelan recall election, should be enough for states to reject these machines if they desire a fair election.

While GOP nominee Donald Trump has been voicing his opinion that the elections are indeed rigged due to media bias, and the proof that mainstream polls are heavily weighted to favor Clinton, it is needless to say that if the results show Hillary as a winner in November, there is going to a mess to shuffle through to find signs of honesty.

REPORT: VOTES SWITCHED FROM TRUMP TO HILLARY IN TEXAS
"She voted straight Republican and the vote had changed to Clinton!"

Residents of at least two cities in Texas are complaining that they voted for Donald Trump only to see the voting machine switch their ballot to Hillary Clinton.

Early voting for the 2016 presidential election started yesterday for people in some areas who have been given the opportunity to avoid the long lines on November 8.

However, in Amarillo, a woman was shocked to see her ballot flip from Republican to Democrat.

“Gary and I went to early vote today,” wrote Lisa Houlette on Facebook. “I voted a straight Republican ticket and as I scrolled to submit my ballot I noticed that the Republican straight ticket was highlighted, however, the Clinton/Kaine box was also highlighted!”

“I tried to go back and change and could not get it to work. I asked for help from one of the workers and she couldn’t get it to go back either. It took a second election person to get the machine to where I could correct the vote to a straight ticket,” she dded.

Meanwhile, in Arlington, Texas, another voter reported a similar experience.

“I had a family member that voted this morning and she voted straight Republican,” wrote Shandy Clark. “She checked before she submitted and the vote had changed to Clinton! She reported it and made sure her vote was changed back. They commented that It had been happening.”

Social media forums are also ablaze with concerns about votes being switched.

The reports are alarming, especially given the fact that the media, Hillary Clinton’s campaign and even President Obama himself have all attempted to dismiss Donald Trump’s concerns about vote rigging as a baseless conspiracy theory.

A good person to ask about reports of vote rigging in Texas would be Texas Director of Elections Keith Ingram, but given that he ran away from our reporters – that might prove to be difficult