Cops remove protestors from their encampmnet on private and

Hundreds of police in riot gear and with heavy military equipment have moved Dakota Access Pipeline protesters from their encampment on private land in North Dakota. Police have reportedly arrested 16 demonstrators so far.
Police have entered the sacred ground camp and surrounded protesters there. The stream from the site showed more than one hundred protesters on the front line.

The Morton County Sheriff's Office confirmed to the Associated Press that it had cleared the private land of protesters around 6:30pm EST Thursday.

According to KFYR, police made 16 arrests by evening time Thursday.

“We see some of you have bows. Do not shoot bows and arrows at us,” they added, as protesters laughed.

National Guard troops and police removed tents and other possessions from the new encampment, which the Standing Rock Sioux tribe says is sacred land granted to them via treaty in 1851.

Police also dismantled the barricade across the road.

As police corralled the protesters southward, some activists remained facing the police and even engaged with them while walking backwards. Atsa E'sha Hoferer was livestreaming on Facebook, telling officers that they should be on the side of the protests and that they too would suffer from contaminated water should the pipeline burst.

Caroline Grueskin‏@cgrueskin
Police are pulling down tents now. Just saw them spray paint an X on a teepee.

Law enforcement were using a long range acoustic device (LRAD) sonic weapon that could be heard on live streams.

Riot police used mace and tasers on the protesters who were defending the new Oceti Sakowin camp, according to social media and live streams from the site.

wes enzinna‏@wesenzinna
Part of the police presence on 1806 right now. "If you do not walk south you will be arrested." ##DAPL #NoDAPL 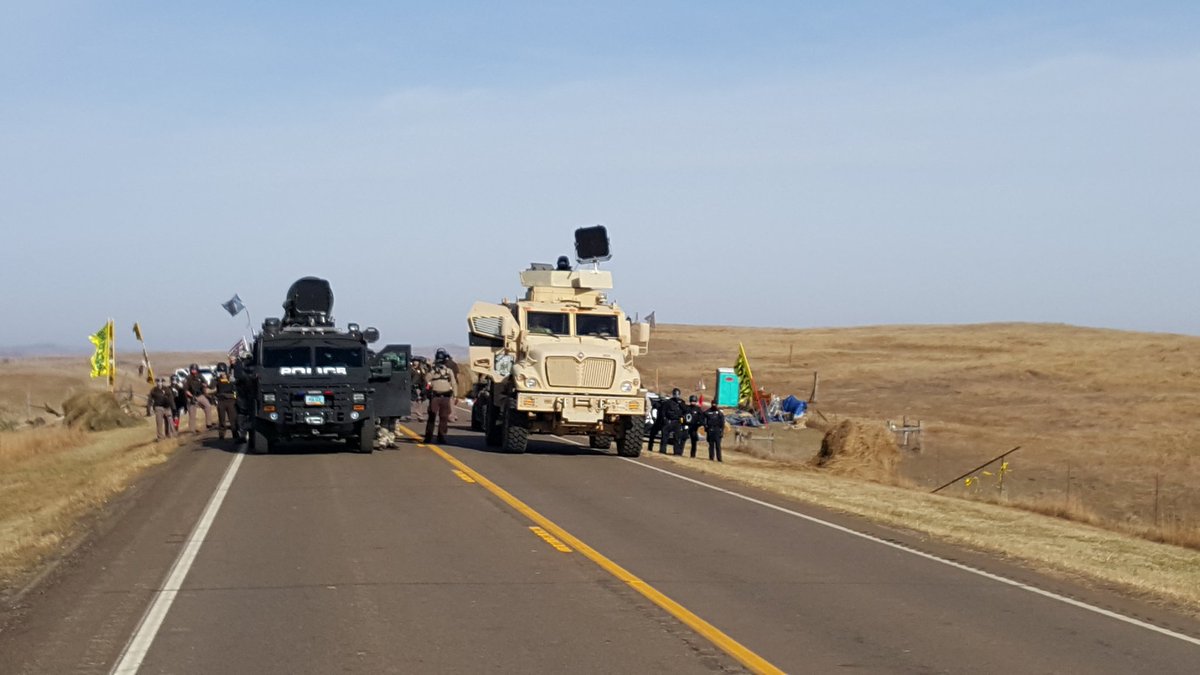 6:28 AM - 28 Oct 2016
The stand-off with police had lasted for several hours before authorties moved closer to the camp and started arresting people. The number of arrested is currently unclear. 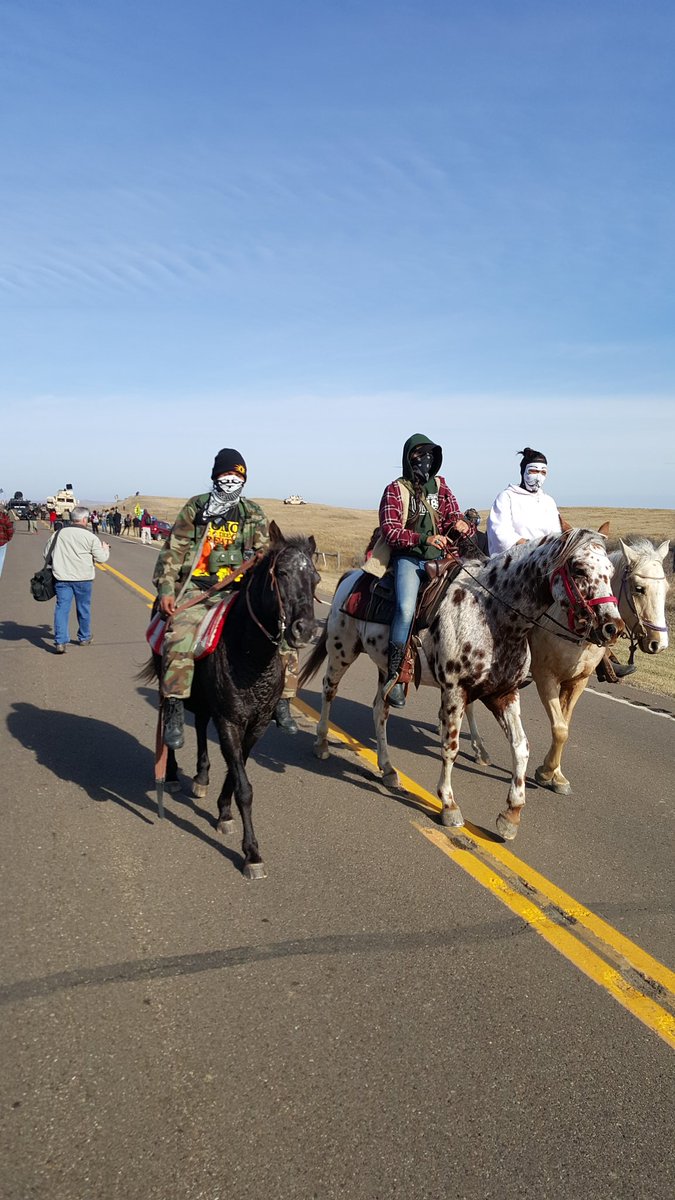 Police have said that they will defend themselves against horses, journalist Wes Enzinna tweeted.

“Do not ride horses at the police,” law enforcement announced.

“You’re endangering people’s lives by what you’re doing,” police told the protesters, telling them to move south or be arrested. People will not be arrested if they return to the main camp, one officer said at the barricade.

Protesters are burning tires, logs and other objects, sending smoke onto the roadway. A car has also been torched, journalist Jason Patinkin tweeted.

Although the Federal Aviation Administration has restricted flights over the Cannon Ball area until November 5, there is a police helicopter above the faceoff, journalist Antonia Juhasz tweeted.

More than 260 protesters have been arrested in the weeks leading up to Thursday’s operation, AP reported.

In the morning police made a line in front of the fence and the company workers are behind them. The tents of the so-called North Camp were located a stone’s throw away from the police line. Authorities insist that this camp should be removed, according to activist Atsa E'sha Hoferer live-streaming from the site.

People on the barricades are retreating peacefully amid chants of “hands up, don’t shoot!”

Bart Starr Mistrot‏@bartmistrot
We need to band together and keep the pressure up against them. One is a map of Native American reservations the other is the DAPL. #NoDAPL

People are moving from the road towards the construction site. “We might as well get arrested defending the sacred,” a protester told the Bismarck Tribune’s Caroline Grueskin.

Construction on the pipeline has resumed within sight of the confrontation on the state highway.

Jason Patinkin‏@JasonPatinkin
While police came from north and things riled up, pipeline construction restarted to west. False flag much?

"Protesters’ escalated unlawful behavior this weekend by setting up illegal roadblocks, trespassing onto private property and establishing an encampment, has forced law enforcement to respond at this time. As I said yesterday, I visited the protesters roadblock and requested them to remove the barricade and have protesters vacate the private property. However, the spokesperson at the roadblock, Mekasi Camp-Horinek of Oklahoma, told law enforcement they 'were not moving'," Morton County Sheriff Kyle Kirchmeier said in a statement. "I can’t stress it enough, this is a public safety issue. We cannot have protesters blocking county roads, blocking state highways, or trespassing on private property."


From Standing Rock: 'They Have Us Surrounded!' (w/Guest: Kandi Mosset