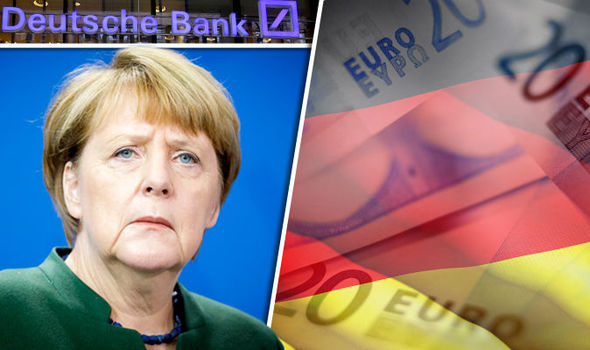 The news comes after British CEO John Cryan today warned of rapid restructuring as the bank posted a two per cent profit amid its weakening position.

According to German media, David Folkerts-Landau, Deutsche Bank's Chief Economist, said a €150bn (£133bn) pot of cash could be enough to recapitalise the banks.

In a bizarre interview Mr Folkerts-Landau said "Europe is seriously ill" and demanded the EU look at bending new rules to avoid disaster.

He told Welt.de: "In Europe the programme does not have to be so big.


"With 150 billion euros, the European banks can be recapitalised.

"Strictly adhering to the rules would cause greater damage than suspending them.

"Europe is seriously ill and has to deal with the existing problems extremely fast, otherwise a crash will be imminent."

The news comes as Germany's largest lender set aside €1billion euros in a litigation battle fund this morning as it gets set to face legal action around the world after the International Monetary Fund slammed it this summer.

The bank said attention around negotiations concerning the DOJ settlement had an 'unsettling effect.'

Analysts say that Deutsche Bank's British CEO John Cryan has "inherited a dogs' breakfast of a bank" as it appears the bank is making a slush fund to counter lawsuits from angry investors.

Deutsche Bank is blaming the US department of justice following the announcement it is to be fined for its troubles.

Failing to recognise that there was a reason for the outcome of the investigation the Chief Financial Officer tries to allay fears.

Deutsche Bank CFO Marcus Schenck said: "The last two weeks in September, post the unfortunate leak from the DOJ (Department of Justice), caused a lot of speculation, which took its toll.

"That continued for a week in October, but the situation has stabilised... Prime Broking has certainly suffered.

"Developments largely followed the same as liquidity reserves... but has since stabilised."

The bank has indicated that it could be March before it settles its fine with the US department of Justice.

The CEO Mr Cryan told investors: "We remain keen to settle this and other open matters with US authorities. We must reduce litigation overhand by settling those matters, remains top priority.

"We need to restructure faster and higher intensity.

"The macro economic outlook has worsened in Europe and the negative interest rate outlook looks unlikely to change.

"We are acutely aware of these changes.

"We need to restructure and modernise the bank faster.

"We are taking steps now on additional cost saving and taking measures for better planning."

This is from Superstation95

Europe on eve of banking ARMAGEDDON which will dwarf 2008 global crash, warns expert 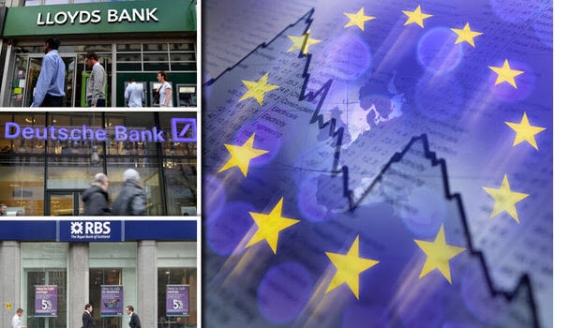 GERMANY, Italy, Switzerland, Britain and France are facing the catastrophic consequences of ‘over leveraging’ as Europe's biggest banks prepare to release their latest results over the next two days.

Analysts say the potential for a cataclysmic failure could spread like a wild-fire hitting the continent (Europe) and beyond as the true extent of deep troubles in the international banking sector are revealed.

The IMF and German governments have refused to step in to prop-up struggling banks but risk analysts are warning Deutsche Bank, RBS, Lloyds, Unicredit, Intesa SanPaolo, and BMPS could all need a state bail out.

And it's going to be a wake up call for the whole of Europe say experts who fear the reports are not going to be good for anyone.

With alarming simliarities to the 2008 global financial crash, the latest results could spell disaster not only for the wealthy bankers paid to operate the system but for ordinary savers.

New York based David Hendler of Viola Risk Advisors says the next two days could have serious ramifications for the entire globe.

"Like autumn leaves falling from the mighty oaks, the incredible yellows, oranges, and reds, will turn and rot into the ugly browns and black detritus, leading to smelly and then crumbled leaves.

"Once a mighty European bank, unfortunately, Deutsche Bank is going down a“death-spiral” path and much of the big European banks are too, whether due to their own transgression or sucked down into the ocean depths by the biggest bank in Europe, Deutsche Bank.

"Compounded by a crippled Italian banking system with no easy way out, and anemic French banking and half-hearted British banking, these big European region banks do not present any good merger saviours.

"Also, with Swiss banks formerly old reliable asset management business continuing to slow whether in China region or Europe and America, they are revenues challenged.

"Spanish banking, though experiencing sluggish revenues seems to be buoyed by its lock on its domestic retail banking markets.

"But don't look for the 'conquistador banks' for any mercy mergers either."

Mr Hendler who held a conference call with global investors yesterday is preparing to publish a lengthy report tomorrow when the results begin to become clear.


He added: "For the most part, all of the above-mentioned German, British, Italian banks either require a State government intervention or they have already been intervened.

"SocGen is the most dangerous French bank with huge systemic risk, ranking as the third highest exposure at $72 billion according to the NYU V-Lab.

"More troubling is that based on the European Banking Authority stress test forecasts.

"For the year 2017 it would take SocGen 11 years to rebuild its capital from pre-tax pre-provision operating earnings.

"That is just plain too long a capital rebuild period and speaks to the company's dangerous systemic risk profile.

"Yet, if the biggest bank in Europe is scrambling, this condition could spread like a wild-fire and encircle much of European banking leading to a possible state of contagion aka as a European regional banking systemic liquidity crisis a point we made in early September."

If things are as bad as many European newspapers are reporting today, this banking problem could COLLAPSE the EURO as a currency! Once the EURO collapses, the U.S. Dollar will have only about two weeks of life left to it, before it too, collapses.

What this means is that anything YOU own which is denominated in "Dollars" will face a disaster. This includes, stocks, bonds, and all the accounts which hold stocks and bonds, like your IRA, 401-K and the like.

It is imperative that YOU have some "wealth preservation" in the form of things which do not lose value: Gold, Silver, Real Estate, etc. Further, if you choose to own Gold, Silver or other precious metals, YOU MUST POSSESS THEM, do not merely buy "paper" gold and "paper" silver which claims that the seller will hold the physical metal for you. Those are scams; the holder of the physical metal has sold the same ounce of Gold to over 500 other people. That means if they all call and demand delivery, ONE person gets the physical gold and everyone else gets . . . . bubkus.

This article (above) isn't about MAKING money, this is about PRESERVING money.

We are entering a very serious time in Global finance and things do not look well for the future. ALl of you remember what happened when Lehman Brothers went belly-up in 2008. Well, Deutsche Bank goes under, you need to understand that they are SEVEN TIMES LARGER than Lehman Brothers was, and this time, no governments have any money left to bail anyone out. If Deutsche Bank goes under, everything else will follow - very quickly.

After serving much drama to its shareholders - and global markets - over the past couple of months, when its stock tumbled to all time lows following the news of the bank's $14 billion DOJ settlement ask, Deutsche Bank provided some relief when earlier this morning it reported a modest, unexpected profit of €256 million for the third quarter on lower litigation and restructuring costs, beating consensus estimates of a €394 million loss, and a far better number than the €6 billion loss reported one year ago. Revenues were also a modest improvement to consensus expectations of €7.19BN, coming in at €7.49BN as a result of a 14% jump in fixed income trading revenues.

The bank's closely watched core tier one capital ratio rose from 10.8% at the end of June to 11.1% at the end of September, as Deutsche cut its risk-weighted assets by €18bn to €385bn. CFO Marcus Schenck said that the ratio would get a further boost of 40 to 50 basis points once the sale of its stake in Chinese lender Hua Xia was completed.

CEO John Cryan repeated that Deutsche was making “good progress” on its restructuring, but admitted that results had been “overshadowed” by its negotiations with the DOJ. “This had an unsettling effect. The bank is working hard on achieving a resolution of this issue as soon as possible."

The failure to provide some additional guidance on the bank's settlement process as well as on its recapitalization status is why the shares have undone the entire 3% gap higher, and were trading fractionally in the red. Raising a red flag, Deutsche Bank also said that it saw €9BN in outflows from its new business for private, wealth and commercial clients in the third quarter.

In its Q3 interime report the bank revealed that it had suffered reduction in business volumes as result of "negative perceptions" concerning business and prospects amid talks tied to RMBS settlement with the DoJ, and added that it saw business reductions and asset outflows particularly in parts of global markets, wealth management business.

In a letter to employees, CEO Cryan said that Deutsche Bank's end-3Q liquidity reserve was ~€200b, down €23 billion from a quarter earlier, and said that the bank’s situation will remain tough for some time. He also said that while talks with DOJ advancing, and it was working to resolve matter as soon as possible, the environment worsened in some important areas.

On the conference call Cryan said that the bank needs to “restructure and modernize the bank faster and with higher intensity,” and added the following remarks:

Finally, when looking at the results, Wall Street analysts said that that while the positive surprise is a relief, it’s was also mostly irrelevant because of potential impact from DOJ settlement.