The fate of Julian Assange

Just in from Wikileaks...

WIKILEAKS' BOARD STATEMENT ON JULIAN ASSANGE< ECUADOR AND THE U.S. ELECTION

Just got this tweet from Wikileaks. It's dated Oct 24 because of the London time zone.

For those of you who may have been concerned about Assange's fate, you can see now that he is well enough. And that the US government (Obama administration) still regards him as a big thorn in their sides.

By putting pressure on Ecuador to cut him off the internet, the US (John Kerry) has virtually confirmed that Assange is not only well, but that Washington is afraid of what Wikileaks might release about Hillary between now and Nov 7.

Wikileaks Provides Status Update On Julian Assange And The US Election 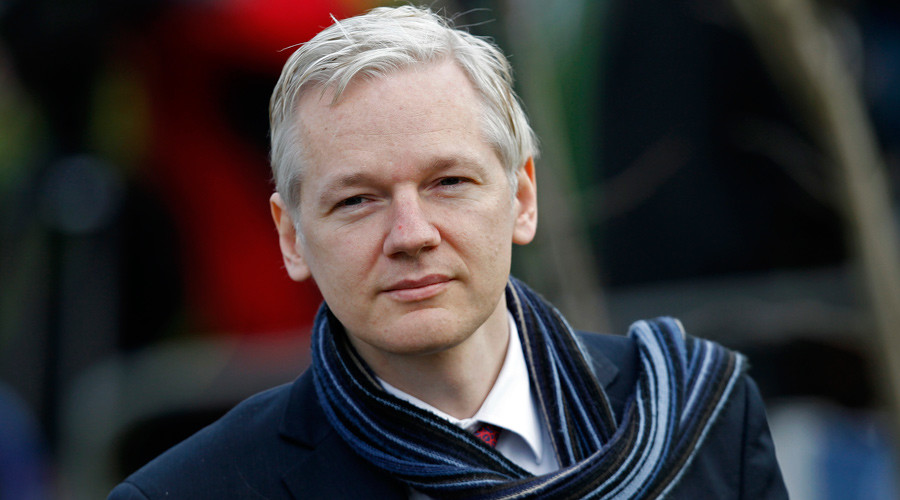 Over the past week concerns mounted that in the aftermath of the surprising decision by Ecuador to cut Julian Assange's internet connection during the US election period (under pressure from John Kerry), that not all might be well with the Wikileaks founder, about whom Hillary Clinton allegedly jokingly asked whether he can be droned. Concerned speculation about the Ecuadorian embassy exile had risen to such an degree, that overnight Wikileaks announced it would provide a state update on Assange's current status. It did so moments ago on twitter when the WikiLeaks Editorial Board issued the following statement on the status of Julian Assange, Ecuador and the US election.

The contents of the statement: 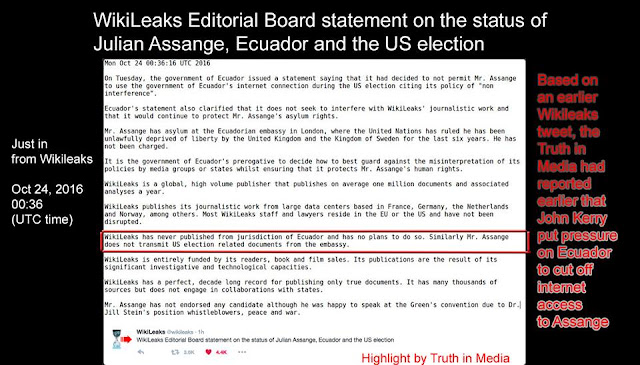 Ecuador's statement also clarified that it does not seek to interfere with WikiLeaks journalistic work and that it would continue to protect Mr. Assange's asylum rights.

Mr. Assange has asylum at the Ecuadorian embassy in London, where the United Nations has ruled he has been unlawfully deprived of liberty by the United Kingdom and the Kingdom of Sweden for the last six years. He has not been charged.

It is the government of Ecuador's prerogative to decide how to best guard against the misinterpretation of its policies by media groups or states whilst ensuring that it protects Mr. Assange's human rights.

WikiLeaks is a global, high volume publisher that publishes on average one million documents and associated analyses a year.

WikiLeaks publishes its journalistic work from large data centers based in France, Germany, the Netherlands and Norway, among others. Most WikiLeaks staff and lawyers reside in the EU or the US and have not been disrupted.

WikiLeaks has never published from jurisdiction of Ecuador and has no plans to do so. Similarly Mr. Assange does not transmit US election related documents from the embassy.

WikiLeaks is entirely funded by its readers, book and film sales. Its publications ar

WikiLeaks has a perfect, decade long record for publishing only true documents. It has many thousands of sources but does not engage in collaborations with states.

Mr. Assange has not endorsed any candidate although he was happy to speak at the Green's convention due to Dr. Jill Stein's position whistleblowers, peace and war.

Reading between the lines, it appears that Assange is fine, if only for the time being.

The world has no mercy!


New casualty of cruel ambition to be US president, the Clinton body count is going up.


Director of WikiLeaks, her biggest enemy besides Trump, is found dead today!


WikiLeaks director and founder of the Centre for Investigative Journalism Gavin MacFadyen has died at age 76. The cause of death is yet unknown. His ‘fellows in arms’ have flocked online to post their farewells, including WikiLeaks co-founder Julian Assange.


“We are extremely sad to announce the death of Gavin MacFadyen, CIJ’s Founder, Director and its leading light,” the Centre for Investigative Journalism team wrote on its Twitter.

WikiLeaksПодлинная учетная запись‏@wikileaks
Gavin Macfadyen was mentor to Assange (and his closest friend in London), to WikiLeaks' Sarah Harrison, Joseph Farrell and many others.
18:03 - 22 окт. 2016 г.
0 ответов2 728 ретвитов5 197 отметок «Нравится»

MacFadyen was a pioneering investigative journalist and filmmaker, who back in 2003 founded the Centre for Investigative Journalism (CIJ), an organization that helped break several major stories and has trained a number of prominent journalists. He was a mentor and friend to famous whistleblower and co-founder of WikiLeaks Julian Assange, as well as the director of the publication. Paying tribute to their head, WikiLeaks published a post on the group’s Twitter account saying MacFadyen “now takes his fists and his fight to battle God.” (USAPOLITICSTODAY)

Where is Julian Assange? We are all seriously concerned now
Kristine Moore

Rumors about WikiLeaks and Julian Assange are swirling around the internet so fast right now that it seems like each time I run a Google search to see if there is any news, several new theories have sprung up already. But this is a good thing. It shows those in control that the rest of us aren’t going to simply sit back, fret, and do nothing. We are going to make sure that Julian is okay. Whatever it takes.

Before Assange, people could be forgiven for thinking that trapping someone inside a small space in London and holding them hostage as a political prisoner was something that only happened during the medieval era. After all, the Tower of London has seen many political prisoners in its time, most of them put there for dubious reasons at best. And now, in the year 2016, we have Julian Assange holed up inside the Ecuadorian Embassy in London. Utterly trapped and unable to even get fresh air or step outside for a walk for fear of arrest. And he has been there since 2012.
What of this possible arrest, you ask? For anybody that has read even in passing that there are rape charges that were filed against Julian, let me just put this to rest right now, once and for all. Julian Assange did not rape anybody.
What he did do was have consensual sex with two women without using protection. In Sweden, if a woman goes to the police and says a man didn’t use protection, they can arrest you on the spot. No proof whatsoever is needed. In this particular case, the women in question both found out that he had been with the other one and sought revenge. Don’t people think it’s odd that the charges were immediately dropped, only to be reinstated again?

A protester outside of the Ecuadorian Embassy where Julian Assange is trapped. [Image by Dan Kitwood/Getty Images]

If you have been paying attention to WikiLeaks long enough, you will know that the United States would dearly love to bring Julian Assange onto American soil so that they can prosecute him for treason, something that could result in the death penalty. If Julian so much as steps outside of the Ecuadorian Embassy, there are British guards stationed outside that will whisk him away to Sweden. From there, the Swedish authorities would almost certainly give him up to the American authorities.
So, for anybody who asks why Julian Assange doesn’t just face the Swedish rape allegations if he knows he is innocent, this is why. It’s all a game. And it’s a game that Sweden and the United States have rigged in their favor to win. But that really shouldn’t surprise anybody.
We’ve all heard by now that Mark Halperin from The Circus has claimed that Julian Assange could be “very easily extradited” if Hillary Clinton wins the upcoming election. And you know what? He’s probably right. But when Assange’s WikiLeaks supporters took down most of the internet on the East Coast and West Coast recently, this was a warning shot to politicians. If political leaders are worried about leaked e-mails and data now, they need to get their heads around the fact that if Julian gets extradited to Sweden and then the United States, or tortured and murdered, it’s game over as far as they are concerned. Is this something they really want to risk because of their pride and ambitions?

Speaking of politicians, WikiLeaks is reporting that it was U.S. Secretary of State John Kerry who demanded that Ecuador cut all internet access for Assange. Ecuador has obviously bowed to American authority and pressure, and this lack of Julian online is what is so concerning to everybody right now.

WikiLeaks posted on their Twitter feed yesterday that it wasn’t unreasonable that supporters were demanding proof that Julian Assange is still alive, and for that very reason they are giving a survey asking participants what would be the most effective and believable way to show that Assange is not singing with the choir invisible.


5:16 PM - 24 Oct 2016
When I took the poll last night, I chose a video speech, which was ranked highest at that point, but I noticed that having Assange stand at his window was in a very close second place.
How do you feel about this whole situation? Is it right that governments are holding a man hostage who is so committed to truth and justice? What do you think the best method of proof would be to show us that Julian Assange is still alive and well?