The FBI's reopening of the Hillary email case

The mainstream media everywhere is (once again) ignoring the content and reporting on Clinton's reponse and the "fury" of the Democrats.  I don't think they're going to be dumping Killary yet.

Here is the Guardian 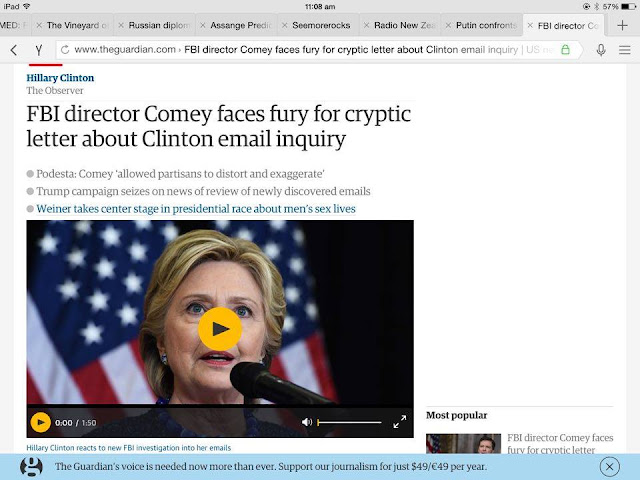 Who is Hillary Clinton's "second daughter". The press only talks about the sexual pecadillios of her husband Anthony Wiener.

Is she a member of the Muslim Brotherhood?

With furious Democrats - and the Clinton Campaign - now openly blasting the FBI's reopened investigation (as Republicans take delight for once in having a government agency reinforce their side of events), the question turns to just what emails were found on Weiner's laptop, and how damaging their contents are for the FBI to take the unprecedented step of "intervening" in a major political event just days before the national election.

We first laid what was the most likely explanation yesterday, when we showed several examples of Huma Abedin emails being sent from her work email account to her personal account at humaabedin@yahoo.com, courtesy of a Judicial Watch FOIA release. Of the more than 160 emails in the latest Judicial Watch release, some 110 emails – two-thirds of the total – were forwarded by Abedin to two personal addresses she controlled. The Washington Times reported in August 2015 that the State Department had admitted to a federal judge that Abedin and Mills used personal email accounts to conduct government business in addition to Clinton’s private clintonemail.com to transact State Department business.

One email from May 15, 2009, was sent by Abedin from her State Department email to her personal email. Abedin was archiving in her personal email account an email Hillary Clinton sent her from Clinton’s private email server at HDR22@clintonemail.com. Abedin was asked to print out attachments to an email Mills sent via a private address the previous day to Clinton involving “timetables and deliverables” for her review via Alec Ross, a technology policy expert who then held the title of senior adviser for innovation to Secretary Clinton. 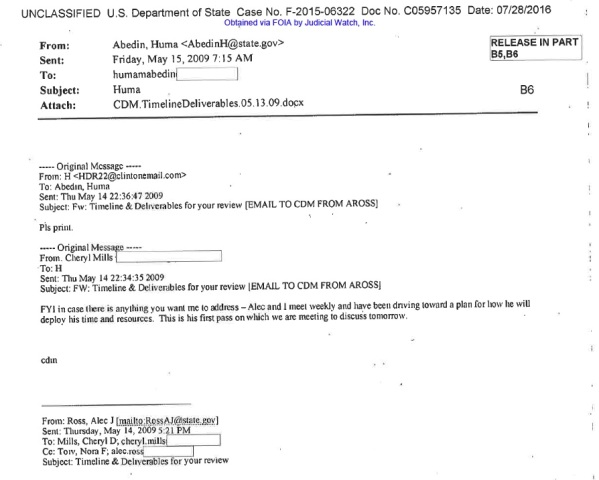 However, while forwarding Hillary's emails to her personal email server for "convenience" is one thing, what is more troubling is the amount of redaction involved in these emails which migrated to the open email account, which as we now know ended up in Anthony Weiner's computer: in the above example, the two pages of timetables and deliverables attached to the email were 100 percent redacted, with “PAGE DENIED” stamped across the first redacted page.

An argument can be made that the extensive redaction confirms confidential material was part of the transmission.

This is a nuanced point being pushed by Hillary Clinton supporters such as Newsweek's Kurt Eichenwald, who in an article yesterday tried to make a case citing "sources" (even though the FBI said that nobody has seen the content of the Weiner/Abedin emails), that "no emails being examined by FBI were to or from Clinton."

It remains to be seen just what is in the emails, although whether Hillary sent emails with confidential content herself, or directed, or simplyallowed her closest aide, Huma Abedin to forward such emails to her outside unsecured email address (where they subsequently ended up on Anthony Weiner's notebook), is what this latest case will be all about and how it will be defended and prosecuted in the media, by the water coolers and perhaps, in court.

Kurt EichenwaldVerified account‏@kurteichenwald
No emails being examined by FBI were to or from Clinton. All of this has to do with procedures followed by an aide.
5:00 PM - 29 Oct 2016

However, we do know one thing: according to the NYT, the number of Huma emails that made their way to Weiner's PC was staggering:

The F.B.I. is investigating illicit text messages that Mr. Weiner, a former Democratic congressman from New York, sent to a 15-year-old girl in North Carolina. The bureau told Congress on Friday that it had uncovered new emails related to the Clinton case — one federal official said they numbered in the tens of thousand

Which brings up two more critical questions: i) when she was questioned by the FBI over the summer, did Huma reveal and admit the existence of these "thousands" of emails located on a personal, home computer, and ii) will the FBI be able to comb through everything in the next 10 days ahead of the election? If the answer to the second question is no, will the US presidential election really take place with one candidate currently under FBI investigation, one which could potentially lead to impeachment proceedings within weeks or days of her being elected president?

Still, the biggest irony in this latest debacle is that it was largely predicted by Donald Trump himself back in August of 2015.

‘Give it a rest’: Social media mocks Senator claiming Russia may be behind new Clinton FBI probe

People on social media shamed US Democratic Senator Tom Ryan, who claimed Russia might actually be behind the reopening of Hillary Clintons’ email probe by the FBI over new leaked messages.
Posted by seemorerocks at 11:51