Julian Assange talks to the world

This would appear to answer the rumours of Julian Assange's demise 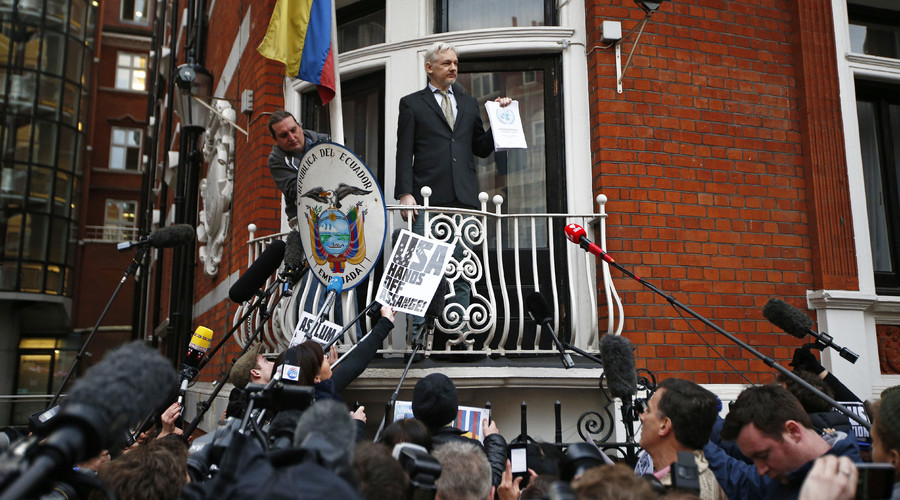 Assange spoke via telephone to a conference in Argentina. © Peter Nicholls / Reuters

Julian Assange has claimed the Hillary Clinton campaign has attacked the servers being used by WikiLeaks. Despite the Ecuadorian embassy shutting down his internet until the US election is over, the website will continue publishing, according to Assange.

“Everyday that you publish is a day that you have the initiative in the conflict,”Assange said via telephone at a conference in Argentina on Wednesday.


The whistleblowing website has been releasing emails from Clinton’s campaign chair, John Podesta, on a daily basis since early October.

READ MORE: 'How's this different from Bill Cosby?': Past of Hillary's husband discussed in Podesta mails

Assange claimed the release “whipped up a crazed hornet’s nest atmosphere in the Hillary Clinton campaign” leading them to attack WikiLeaks.

“They attacked our servers and attempted hacking attacks and there is an amazing ongoing campaign where state documents were put in the UN and British courts to accuse me of being both a Russian spy and a pedophile,” he dded.

Ecuador’s decision to shut down his internet was described by Assange as a “strategic position” so that its “policy of non-intervention can’t be misinterpreted by actors in the US and even domestically in Ecuador.”

Assange, who claimed the embassy will be without internet until the election is over to avoid accusations of interference, said he did not agree with Ecuador’s decision but did understand it. WikiLeaks will not be affected by the decision as they do not publish from Ecuador, he said.

He did, however, reject the idea that WikiLeaks is interfering with the US election, claiming, “this is not the interference of electoral process, this is the definition of electoral process – for media organizations and, in fact, everyone to publish the truth and their opinion about what is occurring. It cannot be a free and informed election unless people are free to inform.”

He also attacked US TV networks, many of whom he accused of being “controlled by Clinton supporters."

RTVerified account‏@RT_com
RT Retweeted WikiLeaks
We were fastest on #Podestaemails6, faster than @wikileaks, and the US conspiracy machine can’t handle it
RT added,

WikiLeaks @wikileaks
@ChristopherJM @RT_com No they didn't. The release was visible to anyone looking at https://wikileaks.org/podesta-emails/?q=&mfrom=&mto=&title=&notitle=&date_from=&date_to=&nofrom=&noto=&count=50&sort=6#searchresult … well before our first tweet.

The Podesta emails will make no difference to the election result, according to Assange. “I don’t think there’s any chance of Donald Trump winning the election, even with the amazing material we are publishing, because most of the media organizations are strongly aligned with Hillary Clinton,” he said.

Assange said journalists and people who work in the media are predominantly middle class and view Trump as representing “what in their mind is white trash.”