Law enforcement officers near cars and ambulances in a humanitarian corridor for civilians and militants along the Castello Road in northern Aleppo, Syria, October 20, 2016. © Michael Alaeddin / Sputnik

Russia has decided to extend the humanitarian pause around Aleppo, Syria, for another 24 hours, the Russian defense minister has said. Militants killed 14 local officials and wounded three Russian officers on the first day of the pause.

Three Russian military officers were lightly wounded when militants opened fire targeting a humanitarian corridor leading from Aleppo, near the El-Masharka government checkpoint, the Russian Center for Reconciliation reports.
"Their lives are out of immediate danger," the center stated.

Inside Aleppo, Ahrar ash-Sham militants publicly executed 14 local officials for calling on locals to leave the western part of the city, the center also reported.

Eight wounded militants left Aleppo via one of the humanitarian corridors on the first day. According to the Center for Reconciliation, they were provided medical aid, fed and delivered to an area under rebel control.

This week, Russia paused its joint offensive with Syrian government troops on eastern Aleppo, which is held by an assortment of armed groups, including Al-Nusra Front, an Al-Qaeda offshoot. The goal is to allow people wishing to leave the city to do so, including both civilians and militants, who were offered separate corridors to leave Aleppo with their arms.

Moscow wants to curb casualties and damage to the rebel-held part of the city, and to allow the level of violence to be reduced in the hope of an eventual ceasefire.

United Nations Secretary General Ban Ki-moon hailed the “humanitarian pause” enforced by the Russian and Syrian military in Aleppo, saying that it “helped pave the way for the implementation of the UN’s medical evacuation plan.” Ban, who was speaking at an informal UN meeting on Syria on Thursday, also noted that the pause in the fighting was “far from enough,” saying that the Syrian government must ensure full humanitarian access to rebel-held eastern Aleppo and agree to ground its air force over the city, while the terrorists must be “isolated.”

Washington and its allies accuse Russia of indiscriminate attacks on civilian targets in eastern Aleppo, claiming they amount to war crimes. Moscow denies the allegations and says the US is at least partially to blame for the continued violence. The Americans failed to force ‘moderate rebels’ to stop mingling with terrorist groups and observe a ceasefire brokered by the US and Russia last month, Moscow said.

© Ministry of Defense of the Russian Federation

Livestream videos from web cameras installed along ‘humanitarian corridors’ in Aleppo, as well as real time drone footage, are now available at Russia’s MoD website, providing a closer look at what is happening in the city amid a provisional ceasefire.

Four web cameras have been set up on the western part of the Castello Road in Aleppo, showing ‘humanitarian corridors’and a Syrian army checkpoint in the Marsharqa neighborhood.

A separate camera mounted on a surveillance drone brings you a bird’s eye view of the area meant to help civilians, as well armed militants, leave eastern Aleppo.

You can watch any of the livestreams at the Defense Ministry’s website. 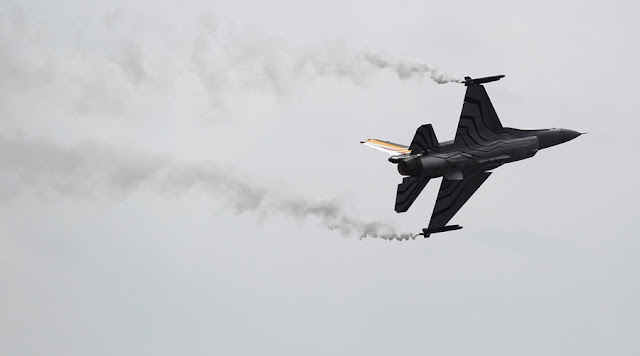 Brussels’ continued denial of the jets movements in the area is Belgian Defense Minister Steven Vandeput “deliberately deceiving people in Belgium and elsewhere in the world, or his subordinates and the Americans are lying to the leadership of Belgium,” Russian Defense Ministry spokesman General Igor Konashenkov said.

An airstrike on the village of Hassadjek in Aleppo province reportedly killed six civilians on Tuesday. Russia has now reiterated its accusations against Belgium, saying data from Russian and Syrian radar stations confirm it.

“Detailed information about the operation of the Belgian F-16s in Syrian sky will be delivered to the Belgian side through diplomatic and military channels,” Konashenkov said.

“Every aircraft type has a unique identifiable signature,” he said.

The Belgian warplanes delivered their night strike at the village at 00:35 GMT, about two hours after take-off, the general said. The attack left six civilians killed and four others injured. Russia tracked the flight of the two planes from Jordan to Iraq and Syria, as well as their encounter with a US KC-135 tanker, which refueled them over the Deir ez-Zor area, Konashenkov said.

Another refueling happened almost an hour after the village attack, he said. The Belgian planes continued patrolling around the city of Azaz in northwestern Syria and then flew towards Iraq, leaving Syrian airspace at 04:25 GMT, he added.

The US-led coalition never informed Russia of the Belgian sorties, Konashenkov said, which goes against the usual practice.

“I’d like to stress that this was not the first time when the international coalition conducted airstrikes against civilian targets and later denied responsibility for them,” he said. “Coalition warplanes have hit weddings, funerals, hospitals, police stations, humanitarian convoys and even Syrian troops fighting Islamic State [IS, formerly ISIS/ISIL] terrorists.”

All the movements were detected by the Russian and Syrian air defense radars.

“Russia has effective air defense measures capable of round-the-clock monitoring of the sky above almost all of Syria. In addition to ours, the airspace is also controlled by Syrian air defenses, which have been restored during the past year,” Konashenkov said.

Responding to the new accusations, Belgian Prime Minister Charles Michel reiterated the denial of his country’s involvement in the bombing.

“Judging by the information from the Defense Ministry, we have nothing to do with it. Of course the parliament will be informed of the role played by our military in the region in the hours or days to come,” he said before an EU summit in Brussels.

Belgium earlier denied Russia’s accusations, saying none of its six warplanes contributing to the US-led coalition had flown over the region. The Foreign Ministry summoned the Russian ambassador to Brussels to voice its protest.


‘Don’t chase terrorists to other countries, kill them on sight’ – Russia on Mosul offensive

A member of the Peshmerga forces inspects homes on the outskirts of Bartila, east of Mosul, during an operation to attack Islamic State militants in Mosul, Iraq, October 19, 2016. © Azad Lashkari / Reuters

The Russian military says it hopes the US-led coalition will not allow Islamic State terrorists holding Mosul to flee the city and go to Syria. It warned the operation is still being monitored.

“Our surveillance spacecraft have been retargeted [at Mosul]. Over a dozen of our surveillance aircraft, including drones, are working in the vicinity,” Army General Valery Gerasimov, the chief of Russia’s General Staff, said.

The general said that the Russian military are particularly concerned with a scenario, in which militants from Islamic State (IS, formerly ISIS/ISIL), who are currently holding the Iraqi city, would “try to escape Mosul or be granted safe passage out of it towards Syria.”

“We hope that our partners from the international coalition realize, what would be the consequences of having bands freely roaming around the Middle East. Terrorist should be destroyed on sight, not chased from one country to another,”Gerasimov said.

The Iraqi government announced an operation to re-take Mosul from IS last Sunday. In addition to the Iraqi regular army, the offensive force includes Kurdish militias and the US-led coalition, which is to provide air support for the ground force. Turkish troops, which were deployed in Iraq against the wishes of Baghdad, will reportedly play a role in the offensive as well.

IS seized Mosul in June of 2014, when it was Iraq’s second-largest city. The terrorist group’s leader then turned it into a major military stronghold, and it is believed that between 4,000 and 8,000 IS militants are entrenched there.
The International Committee of the Red Cross (ICRC) estimates that up to 1 million civilians may flee Mosul amid the offensive, putting a strain on Iraq’s capacity to accommodate internally displaced people.

“Mosul is a city of between 1.2 and 1.5 million people. With the operation being undertaken that’s going to lead to some people being displaced. We don’t know the number of people that will be displaced. So UNICEF is preparing for water and for sanitation for up to 700,000 people in all,” UNICEF's representative in Iraq, Peter Hawkins, told RT.

Islamist militants have shelled a ‘humanitarian corridor’ set up to allow civilians to escape from eastern Aleppo, RIA Novosti reported. The shelling came amid a ceasefire declared the by Syrian military and Russian Air Force.

At least six mortar shells were fired into the ‘humanitarian corridor’ by militants in the Bustan al-Qasr neighborhood of eastern Aleppo. Small arms fire was also directed at a Syrian Army checkpoint, RIA Novosti reported on Thursday.

The exit from the corridor is approximately 200 meters from Islamist positions and apparently within reach of their small arms and mortar fire, according to the report.

Reports on civilian casualties were not immediately available. The Aleppo residents, some sick and wounded, were trying to flee Islamist-controlled eastern Aleppo with an escort from UN and Syrian Red Crescent personnel.

Meanwhile, other ‘humanitarian corridors’ on Aleppo’s Castello Road remain safe, and the evacuation of civilians is expected to begin shortly, with buses and ambulances on standby ready to go, RIA Novosti reported.

The ceasefire took effect on Thursday at 8am local time and the Russian military said earlier in the day that it was ready to extend the pause for three hours upon the request of humanitarian organizations assisting civilians. The Syrian Army and Russian Air Force have suspended airstrikes against militant positions since Tuesday to pave the way for the ceasefire.

There are eight corridors in eastern Aleppo, two of which have been established for rebels willing to leave, who would be allowed exit the city with their arms. The six others are meant for civilians and humanitarian aid deliveries. Syrian forces have already pulled back from those routes, while Russian and Syrian aircraft will stay at least 10km away from Aleppo.

The Russian military added that everyone leaving the area will be monitored by web cameras and surveillance drones. Aleppo residents were informed of the possibility to escape the area by airdropped leaflets, loudspeakers, text messages, and the internet.

Later on Thursday, Defense Minister Sergey Shoigu called upon countries with influence over the ‘moderate’ rebels in Syria to persuade them to leave the city. In the meantime, militant forces continue to receive arms deliveries from abroad, including sophisticated US-made TOW anti-tank missiles, according to Russia’s General Staff.

The US and major European countries have been accusing Russian and Syrian forces of allegedly committing war crimes in Aleppo, but Moscow maintains that Islamist militants have been deliberately mixing with the civilian population in order to use them as human shields.

The UN, however, stood unenthusiastic of the ceasefire. Jan Egeland, the organization's humanitarian adviser, said the UN wanted the ceasefire to be extended until Monday, according to Reuters. He added that the UN was working “round the clock” to obtain necessary permits from the Syrian government to deliver food into besieged eastern Aleppo.