This is a very sensitive topic.

I have always been very sensitive to the needs of refugees coming into the country. However,as was brought out in conversation with an Indian doctor who is looking after refugees, the NGO’s have become more ‘right-wing’ and instead of looking after those refugees who are already here (and their plight in this country is lamentable) they are asking for increases in the quota.

Is it racist to oppose mass immigration (I called it an invasion) and to stand for nations’ sovereignty and right to look after their own people’s interests first?

The easiest way to solve this crisis is to prevent it by stopping the bombing. Already it has been reported that 800,000 refugees have been able to return home thanks to Russian/Syrian/Iranian actions.

But that is not what the western powers want.

Following the infamous Calais ‘Jungle’ camp closure, many of those displaced have been relocating to Paris. RT crew talked to Parisians, both newly-arrived and native, to find out how this is affecting the city.

Despite French Minister of Housing Emmanuelle Cosse assuring people on Friday that there “has been no migrant movement between Calais and Paris,” a number of French organizations that deal with migrants have been reporting an increase in newcomers at the Paris Stalingrad metro station camp since the ‘Jungle’ was closed.

The Office for Welcoming and Accompanying Migrants stated earlier this week that the number of asylum-seekers in the area jumped sharply from 2,000 to 3,000, and the same numbers were voiced by Heloise Mary from the bureau of migration, on France’s BFMTV.

“We have seen a big increase since the start of the week. Last night, our teams counted 40 to 50 new tents there in two days,” Colombe Brossel, Paris deputy mayor in charge of security issues, told Reuters on Friday. French media, citing police sources, has been reporting that large numbers of migrants have been illegally boarding trains and busses to get from Calais to Paris.

“They are mostly coming straight from Italy... but we have some, maybe 20 [from the Calais camp],” Clemence Monar, a volunteer paramedic helping at the migrant encampment near the Stalingrad metro station, told RT. This means that not only those who left Calais are now flocking to Paris, but also those who have just arrived in France skip Calais and go straight to the French capital.

Clemence Monar said she hoped Paris would now become the center of attention for the French migration problem.

“Because maybe then they will finally do something about it.”

The Stalingrad metro area has been dubbed the “migrant triangle” by the media, including Avenue de Flandre street and Jean-Jaurès square. One of the “residents” of this migrant encampment told RT he came to Paris from Calais, although this was a decision he was forced to make by the French government, which he accuses of being reluctant to help.

“[I’m] from Calais. I came here on Sunday, last Sunday. We took the train; we went by train — without a ticket. It’s hard to get to the UK. You understand? Here we come; our country has problems, too many problems, our lives are risky. So, that’s why we come here. But the French government, they are not helping people. I don’t know why,” the man who called himself Mosel, a former ‘Jungle’ resident, said. 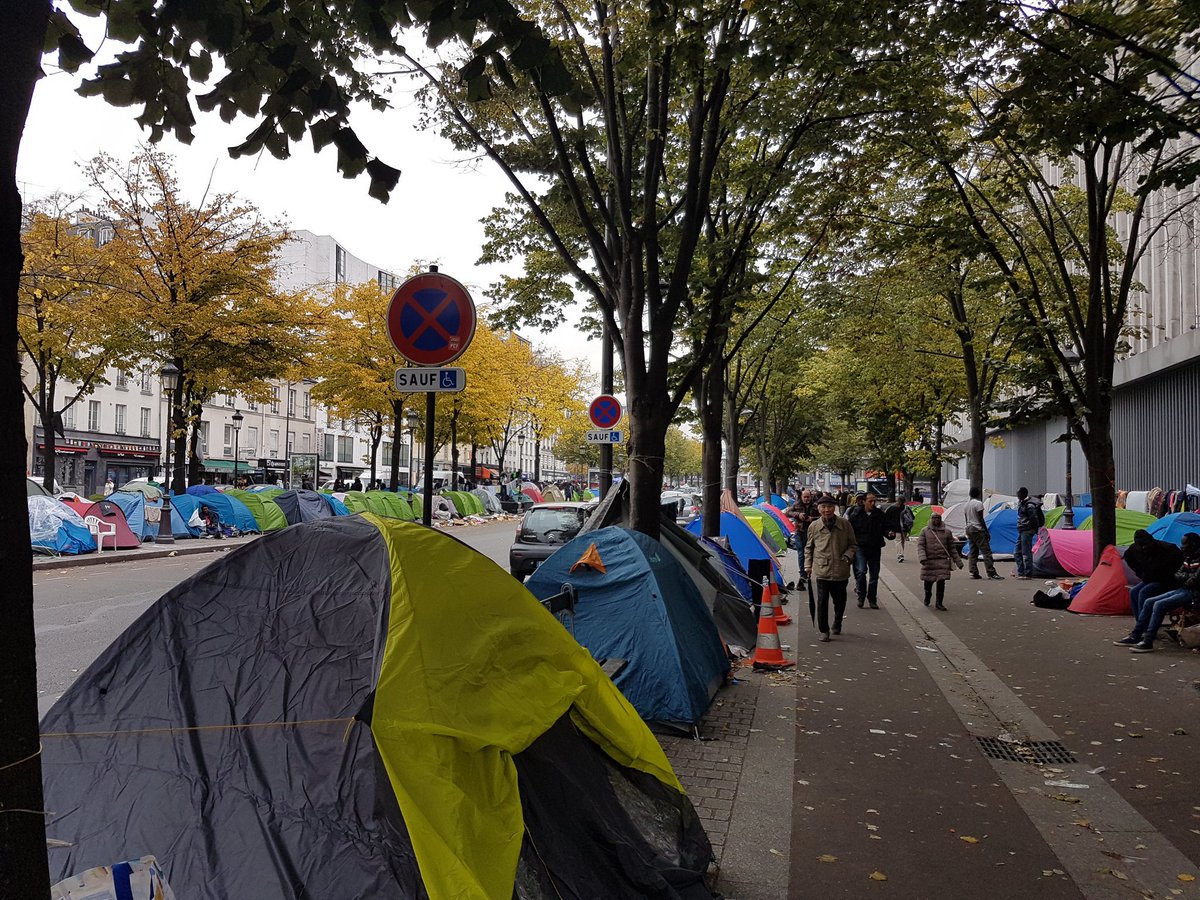 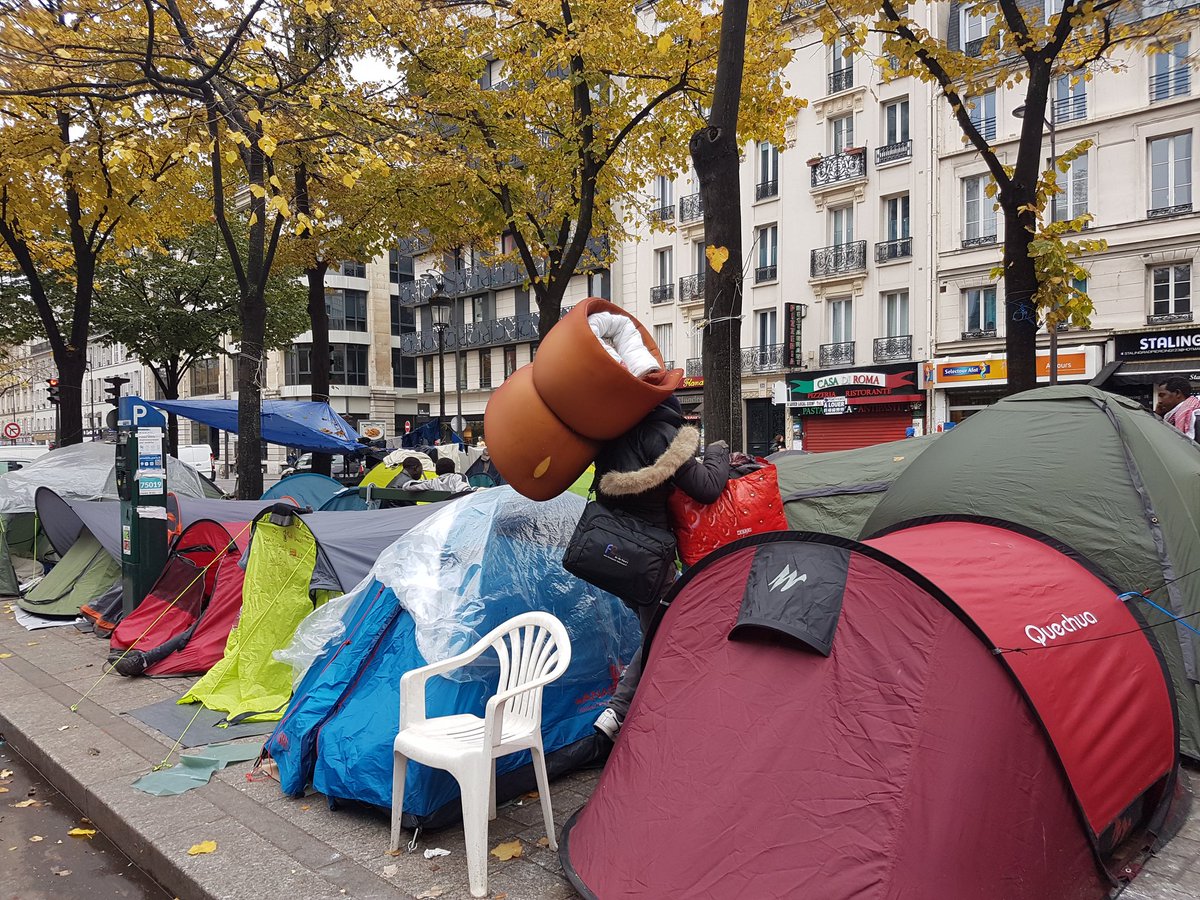 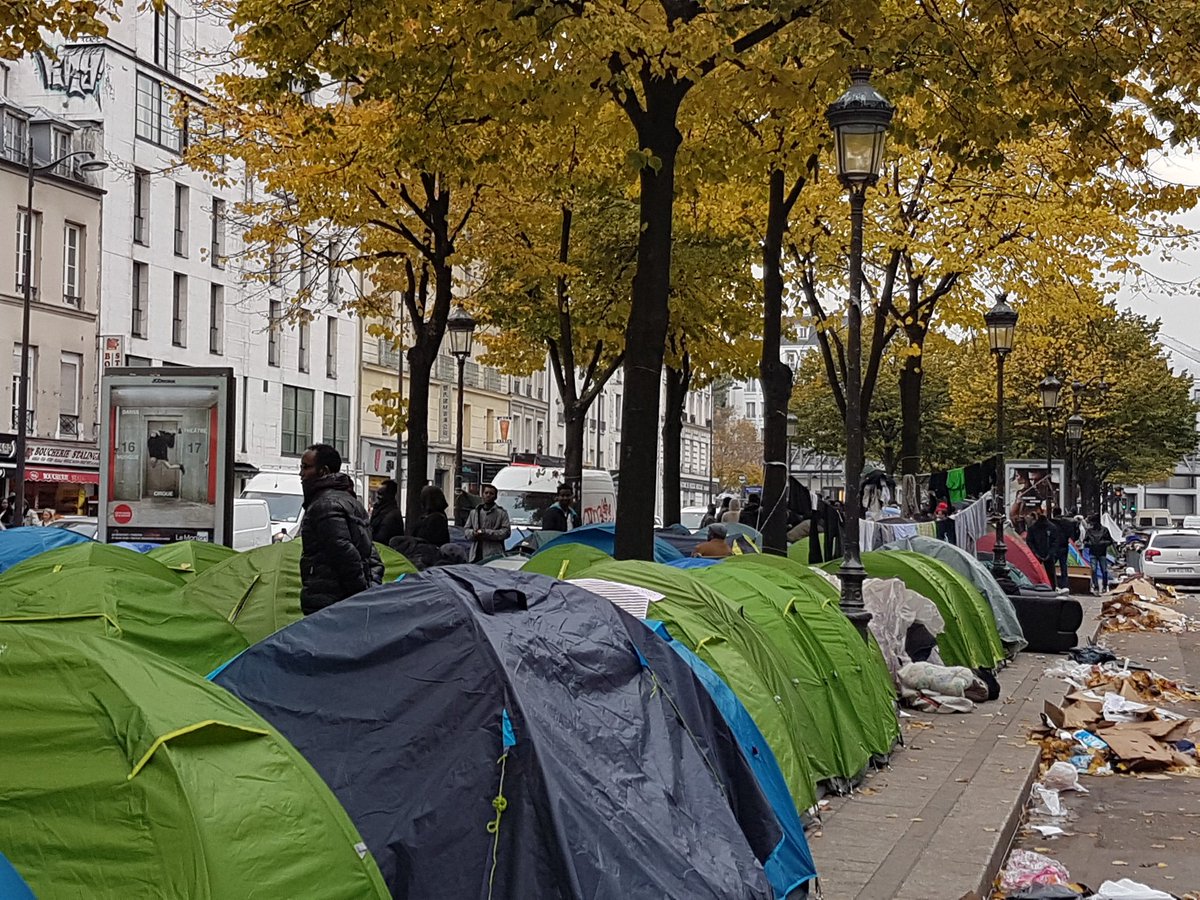 Nowhere to go, impossible to clear

The operation to clear the camp near Calais kicked off this Monday, with violent clashes between police and inhabitants following attempts to demolish the tents and wooden structures, which the residents had used as shelter.

Thousands of migrants looking to cross the English Channel to find asylum in the UK have been holed up at the camp for months, but as Britain so far only agreed to take in around 1,000 migrant children with relatives already in the UK from the camp, and camp inhabitants have been causing trouble in the Calais area, French authorities decided to clear the ‘Jungle.’

The area near Stalingrad metro station in Paris has been the place for refugees’ temporary stay since winter 2015-2016, and has so far been impossible to permanently clear. The camp underwent several mass evacuations, but asylum-seekers repeatedly returned to ‘their’ place near Stalingrad. A lot of volunteers and charity workers have been helping at the camp on a daily basis, handing out food and even installing some kind of rudimentary amenities right out on the street for the migrants to use. They also say the numbers of asylum-seekers swelled, with the “migrant triangle” becoming overcrowded in a mere three days.

“In three previous days we distributed 700 to 800 meals. [On Friday] it is more than a thousand. I do not know how we’ll manage next,” Charles Drane, a coordinator of the charitable NGO ‘Adra’ that provides Paris’ migrants with food, told AFP 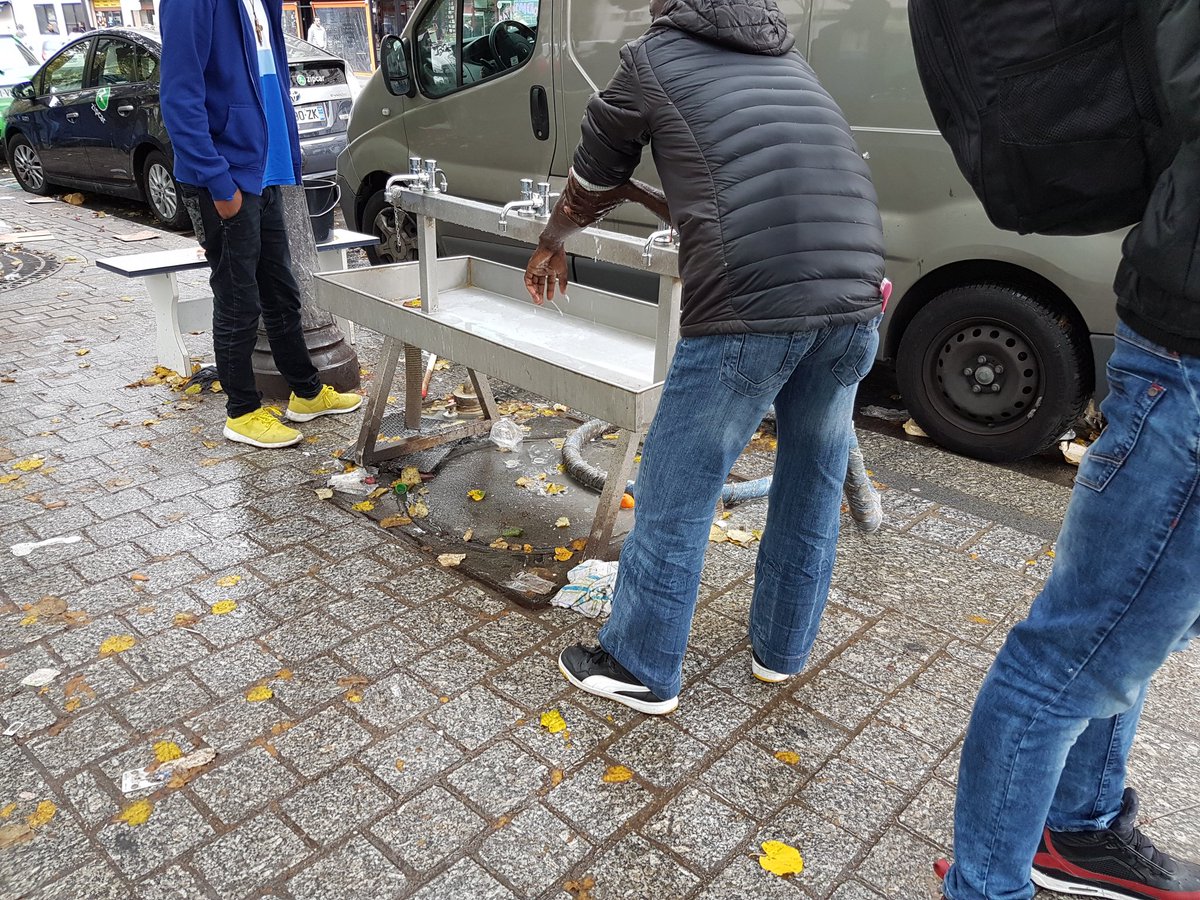 ‘I haven’t recognized my district’

But many native Parisians seem highly perturbed by the new image their city has gained due to the ever-increasing numbers of arrivals, telling RT that although refugees deserve support, it is not a solution to turn Paris into a tent city.

“It’s a very complicated problem because some of these people were forced from their homes because of war, but, also, when there’s a high concentration of foreigners in one place, that poses a real problem,” a Parisian said.

“It’s true that I haven’t recognized this district the last year, and it’s shocking to exit the metro and be confronted with it all the time,” a woman exiting Stalingrad metro station told RT.

“It’s bad... the refugees, they don’t have anything... but it’s not a solution to come and live here in tents,” she added.

Paris authorities recently promised to open a new reception center for asylum-seekers by the end of October, but it will only provide accommodation for 400 people at a time, and is aimed to be used as a transfer point for new arrivals. French officials have not yet specified what they plan to do about the 3000 migrants already in Paris, but President Francois Hollande on Saturday promised to clear the “migrant triangle.”

“We cannot tolerate camps,” Hollande said, adding that they are “not worthy” of France. 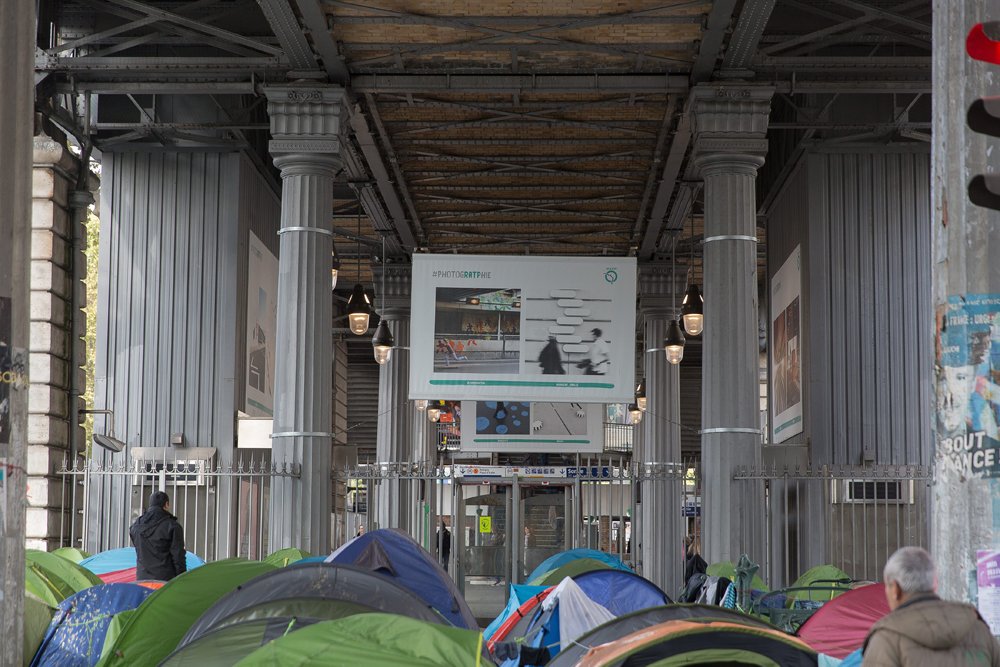