Fighting breaks down between India and Pakistan

Heavy Fighting Breaks Out Between India and Pakistan 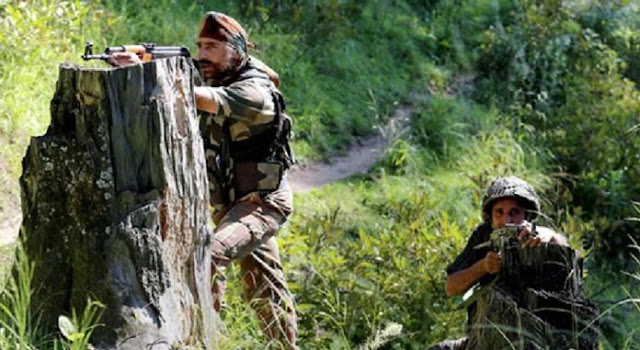 Heavy Fighting Breaks Out Between India and Pakistan, the Post Card News is calling it an all out war and with 20 Pakistani soldiers killed in the first strike I can see how it may spiral out of control. The World is headed to World War it is obvious Germany sending Tanks to the Russian Border, US sending Marines to Norway. Provocations on every side.

BREAKING NEWS: Indian Army Goes All Out War on Pakistan, Kills Over 20 Pakistani Soldiers in Kern!

The Indian army has retaliated aggressively destroying 4 Pakistani posts at Keran after the Pakistanis indulged in unprovoked cease fire violations yesterday resulting in the death of one Indian BSF Jawan.

The Home Ministry is said to have given free hand to Army and told them to give befitting reply to the Pakistanis. The army launched massive fir assault at Pakistanis posts in Keran area. According to reports heavy casualties has been reported on the Pakistani side. Initial reports suggest there has been over 50 casualties. Research and Analysis Officer RSN Singh has reported that more than 20 Pakistani soldiers have killed.

Pakistan seems to have no lesson learnt even after getting isolated in the global platform and still continues to sponsor terror activities and cross border terrorism. Looks like Pakistanis are desperate and will not stop until they completely lose all their resources. But India is well prepared to finish the Pakistanis once and for all and there is no looking back.

Kolahoi‏@PawanDurani
My sources suggest that #India has completely destroyed atleast 4 #Pakistan army posts in past 6 hours .
8:19 AM - 30 Oct 2016

And an Indian one

0 replies 2 retweets1 like
A day after an Indian soldier's body was mutilated by Pakistan-based terrorists along the Line of Control (LoC), the Army on Saturday launched retaliatory fire assaults at Pakistan Army positions, inflicting massive damage across the border.

The Army said at least four Pakistan Army posts were destroyed "in a massive fire assault" in the Keran sector alone on Saturday. "Heavy casualties (among Pakistani soldiers) were inflicted in this assault," said a statement issued by the Northern Command based in Udhampur.