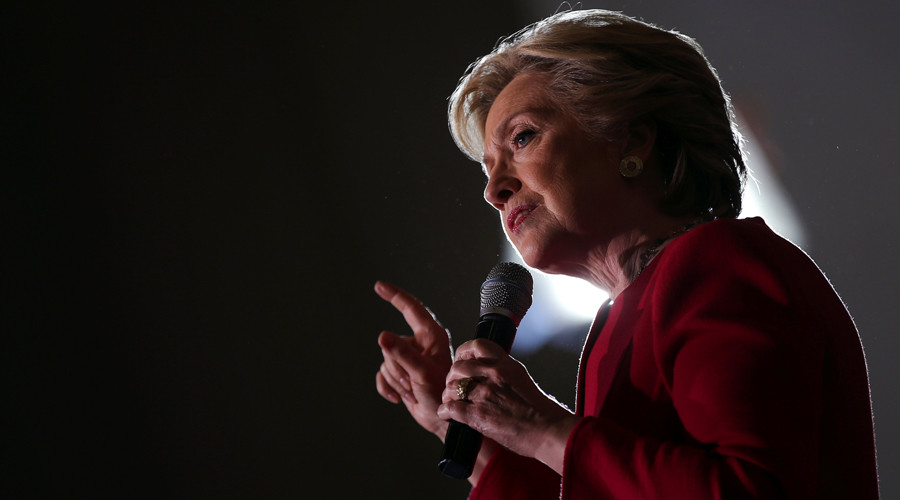 The FBI has learned of more emails involving Hillary Clinton’s private email server while she headed the State Department, FBI Director James Comey told several members of Congress, telling them he is reopening the investigation.

“In connection with an unrelated case, the FBI has learned of the existence of email that appear to be pertinent” to Clinton’s investigation, Comey wrote to the chairs of several relevant congressional committees, adding that he was briefed about the messages on Thursday. “I agree that the FBI should take appropriate investigative steps designed to allow investigators to review these emails to determine whether they contain classified information, as well as to assess their importance to our investigation.” 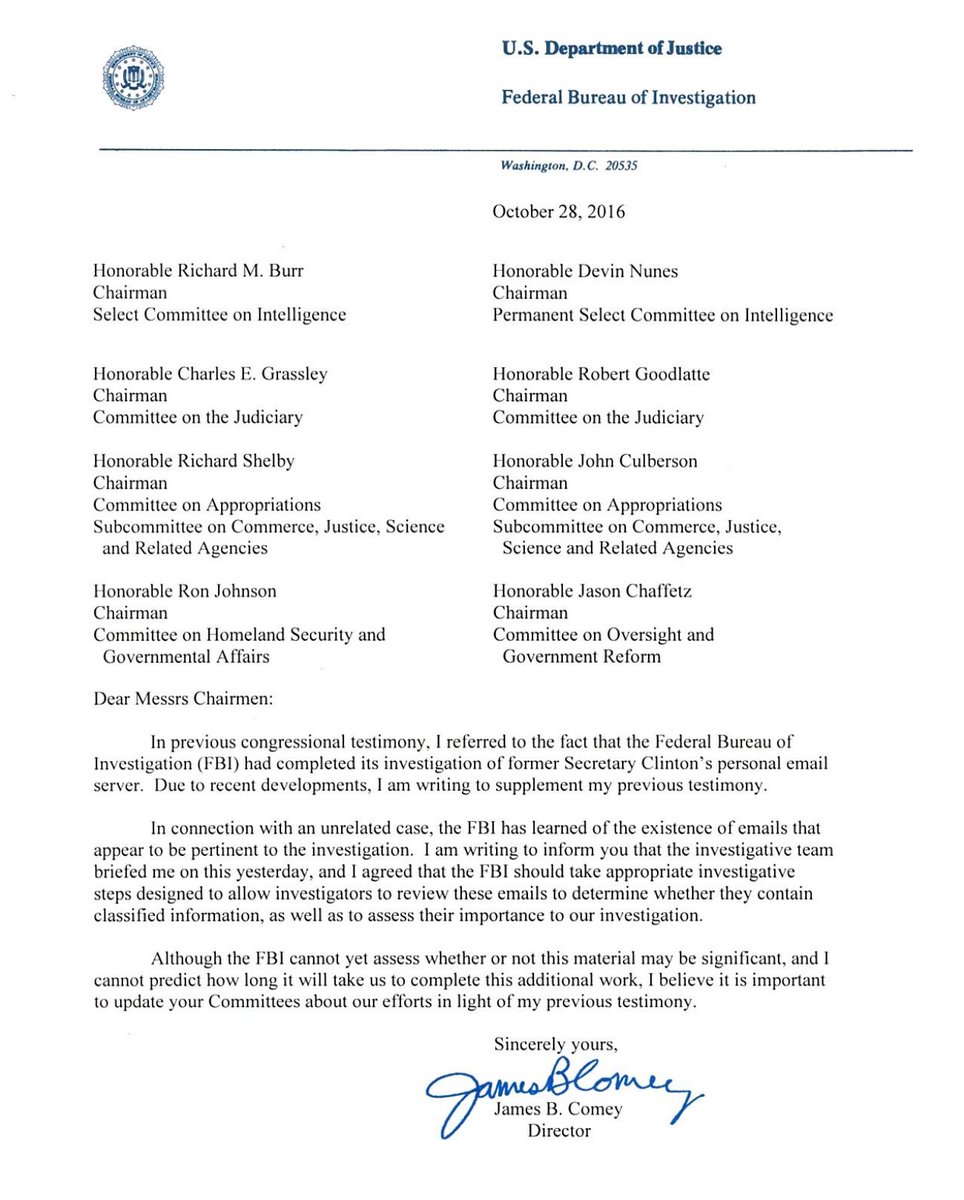 The FBI director cautioned, however, that the bureau has yet to assess the importance of the material, and that he doesn’t know how long that will take.
The Clinton campaign has yet to comment, but an aide told CNN: “We’re learning about this just like you all are.”

Jason ChaffetzVerified account‏@jasoninthehouse
FBI Dir just informed me, "The FBI has learned of the existence of emails that appear to be pertinent to the investigation." Case reopened
5:57 AM - 29 Oct 2016

“Now that the FBI has reopened the matter, it must conduct the investigation with impartiality and thoroughness,” he said in a statement. “The American people deserve no less and no one should be above the law.”

Almost 15,000 new Clinton emails were discovered in September, but it's unclear if the announced investigation relates to them or other correspondence. The newly discovered emails are not related to Wikileaks or the Clinton Foundation, law enforcement sources told CNN’s Evan Perez.

The messages were not found on the private email server in the Clintons’ New York residence, a government source told Reuters.

The emails were apparently discovered as part of the sexting probe into former Representative Anthony Weiner (D-New York), the New York Times reported. His electronic devices, as well as those belonging to his wife, senior Clinton aide Huma Abedin, were seized during that investigation.

House Speaker Paul Ryan (R-Wisconsin) renewed his call for Director of National Intelligence James Clapper to “suspend all classified briefings for Secretary Clinton until this matter is fully resolved.”

“Yet again, Hillary Clinton has nobody but herself to blame,” Ryan said in a statement. “This decision, long overdue, is the result of her reckless use of a private email server, and her refusal to be forthcoming with federal investigators.”
Kellyanne Conway, Republican nominee Donald Trump’s campaign manager, applauded the decision.

“That is superb. That is extraordinary news for the American people,” she told Yahoo News. "A great day in our campaign just got even better," she tweeted.


0 replies85 retweets111 likes
“They are reopening the case into her criminal and illegal conduct that threatens the security of the United States,” Trump said in Manchester, New Hampshire, 10 minutes after learning about the reopening of the case. “We must not let her take her criminal scheme into the Oval Office.”

“I have great respect for the fact that the FBI and the Department of Justice have the courage to right the horrible mistake that they made,” he said. “This was a grave miscarriage of justice that the American people fully understand, and it is everybody’s hope that it is about to be corrected.”

“With that being said, the rest of my speech is going to be so boring. Should I even make the speech?” he joked before turning to his prepared remarks.

The “FBI reopening investigation isn’t an October surprise, it’s an October nuclear explosion,” conservative political commentator Ben Shapiro wrote as part of a tweetstorm, adding that “Comey [is] trying to cover his a** 11 days before [the] election” and wondering if a “pre-emptive impeachment of a president elect” is possible because “the odds on President Tim Kaine just rose substantially.”

An ‘October Surprise‘ is a major event that happens in the month before the election that affects the outcome of the vote.

In response to the announcement, the Democratic Coalition Against Trump filed a complaint with the Department of Justice against Comey.

“It is absolutely absurd that FBI Director Comey would support Donald Trump like this with only 11 days to go before the election,” Scott Dworkin, senior advisor to the Democratic Coalition Against Trump, said in a statement. “It is an obvious attack from a lifelong Republican who used to serve in the Bush White House, just to undermine her campaign. Comey needs to focus on stopping terrorists and protecting America, not investigating our soon to be President-Elect Hillary Clinton.”

Here is Debbie, Sane Progressive on this

This is how Pravda-on-the-Potomac reports it


Clinton Calls on FBI to Explain Reopened Email Investigation Without Delay
US Democratic presidential nominee Hillary Clinton called on the Federal Bureau of Investigation to explain its reopened investigation into her emails and release all available information immediately.

WASHINGTON (Sputnik) — Earlier in the day, Comey informed the US Congress that the FBI discovered new emails sent from Clinton's private server during the course of an unrelated investigation.

Comey said investigators would review the new emails to determine if they contain classified information.

"I’m confident whatever they are will not change the conclusion reached in July," Clinton said at an impromptu news conference Friday on the FBI’s action.

"It’s imperative that the bureau explain this issue in question, whatever it is, without any delay."

Clinton has been criticized for the use of a private email server and account for official business during her 2009-2013 tenure as secretary of state.

In July, Comey described Clinton's conduct as extremely careless but said it did not warrant criminal charges.

After the initial FBI probe, Comey in September described Clinton's use of a nongovernment email system for official business while the top US diplomat as "extremely careless," but he recommended against filing criminal charges against her. In 2014,

Clinton released more than 55,000 emails from the private server to State Department investigators, claiming the documents contained only work-related information. She has admitted to erasing 33,000 emails


Watergate's Carl Bernstein: FBI Wouldn't Reopen A Probe Unless It Is "A Real Bombshell"

In the aftermath of the so-called Cocktober surprise unveiled this afternoon by the FBI when the bureau announced it was reopening a probe into Hillary Clinton's email server because "new evidence has come to light" after "materials" were found on equipment belonging to Anthony Weiner and Huma Abedin, the question on everyone's lips - and certainly Hillary Clinton's and most democrats - is why did the FBI do this now, 11 days before the election, in a way that did not even coordinate with the White House?

One opinion belongs to Watergate journalist Carl Bernstein, who just days after his infamous peer Bob Woodward said that the "Clinton foundation is corrupt, it's a scandal" said that "her conduct in regard to the e-mails is really indefensible and if there was going to be more information that came out, it was the one thing, as I said on the air last night, actually that could really perhaps affect this election. We don't know what this means yet except that it's a real bombshell. And it is unthinkable that the Director of the FBI would take this action lightly, that he would put this letter forth to the Congress of the United States saying there is more information out there about classified e-mails and call it to the attention of congress unless it was something requiring serious investigation. So that's where we are..."

Courtesy of Real Clear Politics is the full transcript:

CARL BERNSTEIN: Well, there's no question that the e-mails have always been the greatest threat to her candidacy for president, that her conduct in regard to the e-mails is really indefensible and if there was going to be more information that came out, it was the one thing, as I said on the air last night, actually that could really perhaps affect this election.

We don't know what this means yet except that it's a real bombshell. And it is unthinkable that the Director of the FBI would take this action lightly, that he would put this letter forth to the Congress of the United States saying there is more information out there about classified e-mails and call it to the attention of congress unless it was something requiring serious investigation. So that's where we are...

One thing is, it's possible that Hillary Clinton might want to on her own initiative talk to the FBI and find out what she can, and if she chooses to let the American people know what she thinks or knows is going on. People need to hear from her...

I think if she has information available to her from the FBI or any other source as to her knowledge of what these e-mails might be, hopefully she will let us know what they are and what is under discussion here.

Right now we're all talking in a vacuum but I want to add here that in the last, oh, 36, 48 hours, there has been an undercurrent of kind of speculative discussion among some national security people that something might surface in the next few days about e-mails, and I think the expectation in this chatter -- and I took it as just chatter but informed chatter, to some extent -- was that it would relate to another round of WikiLeaks e-mails, which our Justice Department people seem to be saying is not the case, but there has been some noise in the national security community the last day or two of this kind of possibility of some kind of revelation.

But this is her achilles heel and we have to remember that it also comes on the -- back to the word heel -- of the revelations about the Clinton Foundation. So the confluence of all of this is bad for her as it stands now but with some knowledge she might be able to stop, turn things around, and give us some idea of what's going on in a way we might not otherwise know, and also it's very possible that some members of congress very quickly are going to get an idea of what these e-mails are, and what this is all about, and for whatever purpose put some information out there.