The one thing that he raises that needs answering is why Wikileaks posted an old video of Michael Moore at the Embassy and is passing it off (seemingly) as something recent.

I don’t think this is going to go away soon – and probably before the US election is out of the way.

The only way that it can be proven that Julian is safe is for us to see him (as in an interview). Elliptical statements by Wikileaks will not help.
Julian Assange 'DEAD MAN SWITCH' Possibly Activated 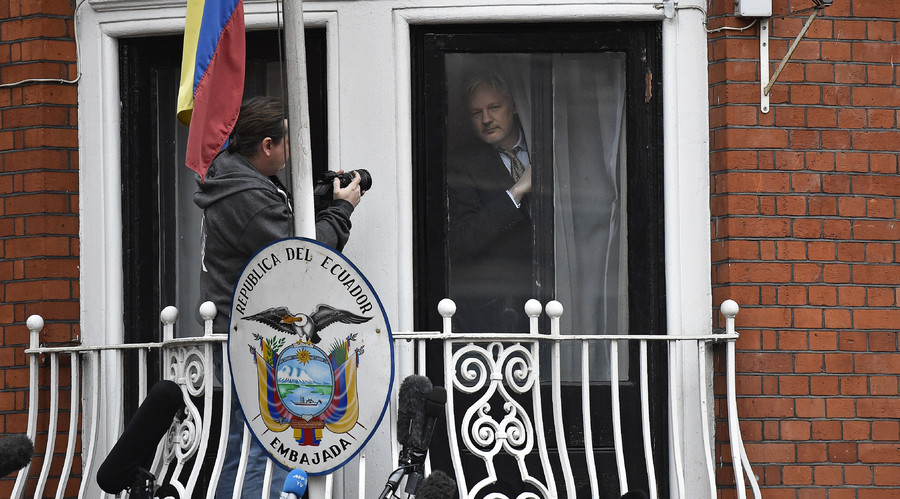 Rumors of Julian Assange’s death are still circulating after his internet connection was abruptly cut more than a week ago. Now WikiLeaks is asking the online community what proof it needs to believe their “best known validator” is alive and well

Amid the swathes of Hillary Clinton campaign team emails being leaked by the controversial whistleblowing organization, speculation was rife last week that the WikiLeaks co-founder had met an untimely and mysterious end.

The rumors stemmed from a supposed “dead man’s switch” code tweeted by WikiLeaks and the fact the government of Ecuador had scuttled Assange’s internet connection – one of his few means of communication with the outside world.

In an effort to dispel the claims, WikiLeaks has posted a poll online asking people what they need as “proof of life”.

“Thousands keep demanding proof of life. Not unreasonable. He’s in a tough spot and is WikiLeaks best known validator,” read a tweet from the organization.

The life-confirming options include: a picture of the Australian, a video, a statement by his lawyers or a public appearance at his window.

Assange is being given asylum at Ecuador’s London embassy, over fears rape allegations made against him in Sweden could lead to his extradition to the US to face investigation over WikiLeaks’ actions.

For four years his public appearances have been restricted to speaking from the embassy’s front window or via video link.

Kickback‏@TokuChris
People should be more concerned that Julian Assange may have been forcefully removed from his asylum (or killed) by the US government.
9:09 AM - 19 Oct 2016
Following the poll, people have been suggesting other ways to convince them Assange has not drawn his last breath, such as getting on a plane to Sweden, twerking, and even footage of the 45 year old “miming the lyrics to comfortably numb by Pink Floyd.”

Gareth Brown‏@OXONAssassin
@wikileaks a video of him miming the lyrics to comfortably numb by Pink Floyd.
5:19 PM - 24 Oct 2016

After over 30,000 votes, the video option is currently the leading choice in the poll.

Some commenters have also urged the Australian computer programer to “stay away” from the window because of their belief the high profile thorn in the side of the US government might be assassinated.

How can Julian Assange prove he is alive?