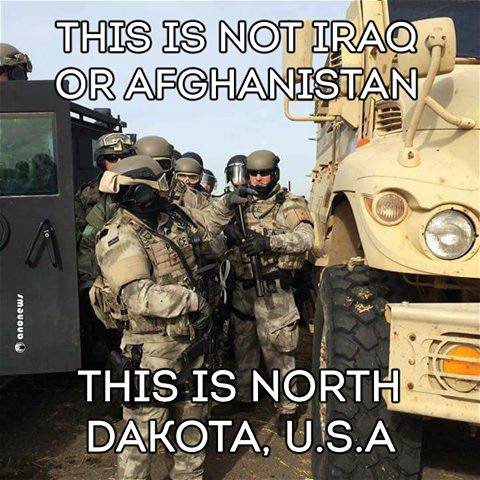 As the protests against the Dakota Access Pipeline continue to escalate, the crackdown from law enforcement has grown harsher and harsher. Hundreds have been arrested by Morton County police, many of them without charge, and have had their civil rights violated by shockingly cruel police officers, who are sexually humiliating their prisoners by strip-searching them and leaving them naked in their cells.

When getting booked at the jail, they were all strip searched, forced to “squat and cough” to demonstrate they had nothing hidden in their rectums, then were put in orange jumpsuits. The treatment was the same for Chairman of the Standing Rock Sioux Tribe Dave Archambault, to a pediatrician from the reservation, Dr. Sara Jumping Eagle, to actress Shailene Woodley, star of the films “Divergent” and “Snowden,” among others.

The use of a strip search for those arrested on trumped-up charges like “trespassing” and “rioting” is a clear intimidation tactic that shows the the United States government still sees Native Americans as savages to be abused.

LaDonna Brave Bull Allard told The Young Turks how her daughter was arrested, stripped of her clothes by three male and one female officer, and then left naked in a cell overnight. “They’re targeting our families” she said. Human rights abuses have been widely committed by police and security forces as they try to discourage the protesters.

Rebecca Kemble, Alderwoman from Madison, Wisconsin, recounts how arrested protesters are beaten and thrown into pieces of the very pipeline they are protesting. “I saw the Marathon County deputy push her down the hill and slam her body and head into the transport van after this.”

Georgianne Nienaber of the Huffington Post knows where to point the finger for these outrageous crimes.

Sheriff Kyle Kirchmeier is the official who sets the tone for police actions in Morton County North Dakota. He alone determines how prisoners are treated. He holds the authority to enforce humane treatment or encourage cruelty designed to instill fear, humiliation, embarrassment and shame. And shame is the ultimate weapon—utilized by the narcissist in a pitiful attempt to gain control and break the spirit of his victims.

This kind of systematic violence is the way the U.S. government has always treated the native inhabitants of the American continent. Very little mainstream news coverage is documenting these crimes, instinctively taking the side of the corporation plotting to desecrate the sacred grounds of the Standing Rock Sioux in order to make a quick buck off of climate-warming and water-poisoning fossil fuels. We cannot allow the police state to squash the will of the people. 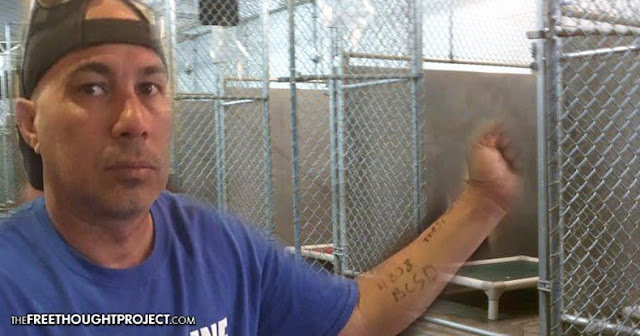 
Cannon Ball, N.D. — On Thursday, police from no less than five states sporting full riot gear and armed with heavy lethal and nonlethal weaponry, pepper spray, mace, a number of ATVs, five tanks, two helicopters, and military-equipped humvees showed up to tear down an encampment of Standing Rock Sioux water protectors and supporters armed with … nothing.

But the target of their operation — a group of slightly more than 200 Native American water protectors and supporters opposing construction of the Dakota Access Pipeline — never intended to do battle with the armed, taxpayer-funded, corporate-backed, state-sponsored aggressors.

Reports vary, but no less than 141 people were arrested Thursday, and — according to witnesses — police marked numbers on arrestees’ arms and housed them in cement-floored dog kennels, without any padding, before they were transported as far away as Fargo.

“It goes back to concentration camp days,” asserted Oceti-Sakowin coordinator Mekasi Camp-Horinek, who, along with his mother, was marked and detained in a mesh kennel, reports the Los Angeles Times.

Although Thursday’s incident remained relatively peaceful for some time, with only shouts, chants, and occasional attempts by water protectors to convince this standing army to examine its motives and reconsider, clashes nonetheless broke out — solely because of gratuitous police aggression.

After facing off for a couple hours, these militant cops began closing in on the water protectors to shut down the Treaty of 1851 camp — in reference to the Fort Laramie Treaty of that year, which established a large parcel of land designated exclusively Native American territory not to be disturbed by the U.S. government. Prior to his arrest, Camp-Horinek had established the camp, stating, as cited by Indigenous Rising:

“Today, the Oceti Sakowin has enacted eminent domain on DAPL lands, claiming 1851 treaty rights. This is unceded land. Highway 1806 as of this point is blockaded. We will be occupying this land and staying here until this pipeline is permanently stopped. We need bodies and we need people who are trained in non-violent direct action. We are still staying non-violent and we are still staying peaceful.”

Despite the water protectors’ commitment to nonviolence, the militarized police response went as would be expected — horribly awry.

“A prayer circle of elders, including several women, was interrupted and all were arrested for standing peacefully on the public road,” stated a press release from Indigenous Environment Network. “A tipi was erected in the road and was recklessly dismantled, despite law enforcement statements that they would merely mark the tipi with a yellow ribbon and ask its owners to retrieve it. A group of water protectors was also dragged out of a sweat lodge ceremony erected in the path of the pipeline, thrown to the ground, and arrested.”

Claims to the contrary by Morton County Sheriff Kyle Kirchmeier aside, Native American and Indigenous water protectors and supporters have refrained from violent acts on the whole, preferring instead peaceful prayer vigils and acts of civil disobedience.

No matter how peacefully the opposition acts, armed defenders of Big Oil interests seem determined to brutalize, disrespect, and generally incite and inflict violence against those who desire unsullied water for generations to come.

In fact, at the beginning of September, a private security firm hired by Energy Transfer Partners, the company responsible for pipeline construction, indiscriminately unleashed vicious attack dogs on water protectors, press, and supporters — for reasons as yet unknown.

During the savage attack, a pregnant woman, young girl, and many others suffered serious dog bites thanks to the ineptitude of the dogs’ handlers. Afterward, a warrant for inciting a riot was issued Democracy Now! journalist Amy Goodman — for doing her job, filming events as they happened — though charges were subsequently thrown out.

Although ETP and some law enforcement officers defended the barbarous actions of the private security mercenaries, the Guardian now reports that — because the guards lacked proper licensing — they could now face criminal charges. On Wednesday, the Morton County Sheriff’s Office made the determination that “dog handlers were not properly licensed to do security work in the state of North Dakota.”

Bob Frost, owner of Ohio-based Frost Kennels, told the Guardian, “All the proper protocols … were already done. I pulled my guys out the next day because we weren’t there to go to war with these protesters.”

Frost insisted he had cooperated with authorities investigating the incident — but the sheriff’s department disagrees. Seven handlers and dogs were deployed to the scene in early September, allegedly in response to reports of trespassers; but, according to the Guardian, police have only managed to identify two people.

The sheriff’s department claims Frost has not provided necessary information, and unnamed security officials cited in the report said that “there were no intentions of using the dogs or handlers for security work. … However, because of the protest events, the dogs were deployed as a method of trying to keep the protesters under control.”

In a statement cited by the Guardian, Morton County Captain Jay Gruebele said, “Although lists of security employees have been provided, there is no way of confirming whether the list is accurate or if names have been purposely withheld.”

Water protectors, in the meantime, are left to deal with absurdly disproportionate state violence — and the altogether unacceptable, disrespectful, and demeaning insult of being relegated to dog kennels after being arrested for exercising their rights.


“Over the course of the last several months the abuse of detainees by Morton County Law Enforcement has overstepped every boundary guaranteed by the American constitution. Water protectors have been seen being bound and hooded by police. People are being stripped searched and abused within their jail for misdemeanor crimes. And police have employed the use of mass surveillance through drones on the protector camps. This isn’t a war zone this is North Dakota.”
Posted by seemorerocks at 12:02