Of course this marks so much more than the end of neoliberalism. But Winston is more right than anybody on the NZ political scene. 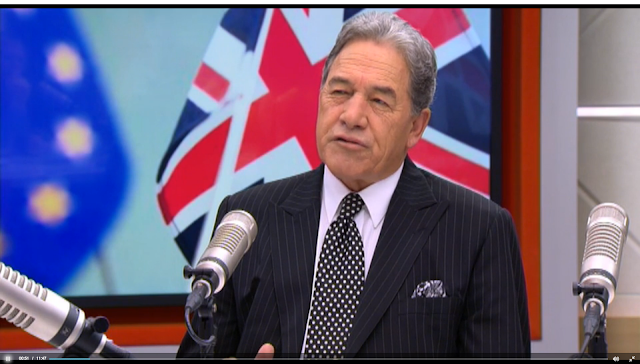 UK voters shocked the world on Friday by electing to quit the European Union (EU). It sent the British pound into freefall, wiped billions off stock markets worldwide and there is now serious talk that Scotland could quit the 300-year union with England, Wales and Northern Ireland so it can stay in the EU.

Though the vote was tight and the British establishment was largely against leaving, Mr Peters says the result was "forecastable" as far back as February.

"A majority got there, up against all the money, all the influence-peddlers, the IMF, President Obama, every international leader including the Australian Prime Minister Turnbull, and John Key throwing in their weight. They just gave it the British one-finger salute," the New Zealand First leader told Paul Henry on Monday.

"Those people couldn't see why the British people wanted to leave. They didn't understand what was going on, and they still don't, from the Prime Minister's comments this morning."

Mr Key says not much will change in terms of New Zealand's trade with the UK, which he says involves less than 5 percent of our exports. Nor will British companies want to lose access to our market.

"We've had a longstanding relationship with Britain, long before it went into the European Union," he told Paul Henry.

"We're pretty well placed. [Trade Minister] Todd McClay is off to China… he's going to have some discussions with both EU and British trade officials there. He's ready to go."

Mr Key says negotiations on a free trade deal with the EU are already halfway done, and while the loss of the UK will be a blow, he's not overly concerned.

"I'm happy we've been investing our time with European leaders. We've established quite good relationships, which we need."

He says Germany has been just as strong an advocate for a deal as the UK was. But Mr Peters says the German people might be looking to quit the EU soon too, over immigration concerns.

"The moment that [Chancellor Angela] Merkel opened the borders and people flooded in -- I'll never understand why she did that. Maybe it was a part of their Nazi past conscience. They just came everywhere over the border."

He says immigration was the driving factor behind why British voters chose to quit.

"If you ignore the pressure of immigration, which exacerbates the feeling that 'I'm doing pretty bad, and now I've got all this competition,' then you get what you get now."

UK Prime Minister David Cameron, who campaigned for the Remain camp, has announced he'll be stepping down. Mr Key says it's not surprising.

"I would have been absolutely stunned if he hadn't gone. He fundamentally has been pro-Europe. Yes he's seen faults, yes he's been trying to negotiate a better deal.

"But at the core of it all, he has absolutely passionately believed what he was fighting for, which was the Remain camp."

He's yet to speak to Mr Cameron, but has sent him a text.

"I knew he would be completely snowed under with all the things that are going on. I'm a mate of his, and I want to have a proper conversation with him."