Pound in freefall after Brexit vote

Pound in FREEFALL as Britain heads toward Brexit: Sterling plummets more than TEN PER CENT to 31 year low

The pound was in freefall this morning as results from the EU referendum came in and Brexit appeared more and more likely.

The pound lost more than 10 per cent against the dollar and plunged below $1.35.

A bombshell result in Sunderland, which far exceeded expectations in the Leave camp, provoked fierce new jitters in the City.

The pound immediately plunged 3 per cent after the Sunderland result and at 2am was more than 5 per cent off against the dollar. The market rebounded some of the lost ground after Wandsworth voted strongly for Remain.

But at around 3.30am as expectations of a Brexit vote grew and it became the bookies favourite for the first time, Sterling dropped like a stone. 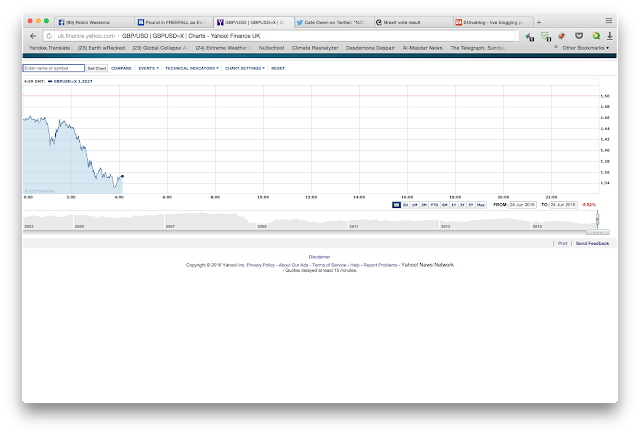 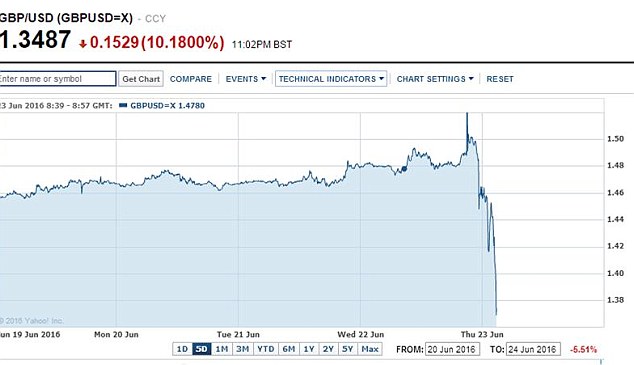 The pound dived by 3 per cent as the result in Sunderland was announced and revealed a huge win for the Leave campaign. It crashed further to almost 6 per cent down after Swansea was announced for Leave before rebounding a little as London's first results came through in Wandsworth

The FTSE-100 was also expected to open sharply down when trading resumes at 8am.

Analysts said the instant dive in the value of the pound was the deepest since Black Wednesday in 1992 - but the figure is expected to rebound over the course of a rollercoaster night.

The prospect of a Brexit vote had sent repeated shudders through the markets in recent weeks.
Chancellor George Osborne's former economic adviser, Rupert Harrison, said the fluctuations in the pound were 'an expression of the deep uncertainty that is going to face businesses all around the country and indeed in the whole of Europe'.

'How can they invest when they don't know what is going to happen next, what their trading relationship is going to be,' he told ITV News.

'We've had a lot of predictions during the campaign, the economics profession amazingly united saying this would be a negative shock to the British economy and I think we are seeing indications of that in these market moves tonight.'

Shadow chancellor John McDonnell told BBC News: 'That is exactly the sort of shock we were expecting so I would expect the Bank of England to intervene in the morning.

'Chancellors and shadow chancellors can't comment on sterling but what we can do is have a mature approach to this and say whatever the outcome, we will negotiate the best deal we possible can with regard to our trading partners in Europe and in that way we might give some assurances to the market.'

The pound hit fresh 2016 highs against the dollar and the euro today in a further sign that City traders remain convinced the Remain camp will eke out a win in the EU referendum.

The spike in the value of the pound above $1.50 after 10pm will be seen as a fresh vote of confidence in Britain remaining in the EU.

Michael Hewson of CMC Markets said: 'As the final poll from YouGov hit the wires sterling pushed back higher again towards the 1.50 level.

'With Nigel Farage also admitting that Remain may have edged it, it would appear that the fat lady is in the act of clearing her throat and readying herself to sing.' 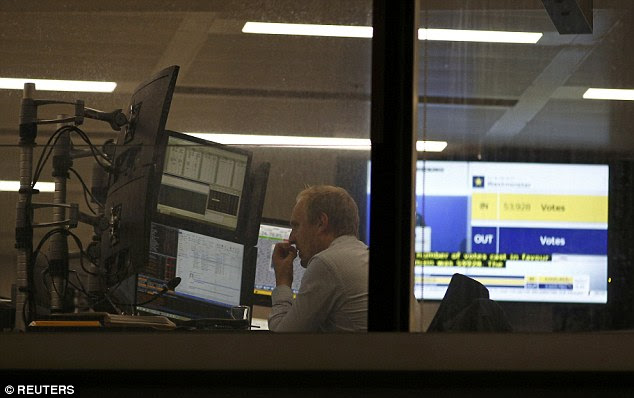 A trader was working through the night as the Leave campaign took a massive lead, sending the pound into free fall in the early hours

The pound has now surged by 5% over the past seven days as Brexit fears have receded, enjoying its best weekly performance since 1985 and reclaiming all its losses since the start of the year. On Monday, sterling notched up its biggest one-day gain against the dollar for nearly eight years.

Joe Rundle, of ETX Capital, said: 'Markets have been betting heavily on a Remain vote all day, with the FTSE and sterling rising strongly as polls point to Britons giving Brexit the thumbs down.

'For now markets are pretty calm but these are only forecasts - we're waiting for the first declarations from the first counts to get a clearer picture.'

Sterling has continued its recent revival, after weeks on the slide amid fears over polls showing a strengthening Leave vote.

Meanwhile holidaymakers have been snapping up foreign currency - in what some have termed 'panic buying' - in anticipation of their summer holidays in Europe.

Queues outside currency exchanges across the UK have mounted amid fears that a Brexit win tomorrow would lead to the pound crashing, leaving Britons across the Continent short changed.

Earlier this week, billionaire George Soros - who forced then prime minister John Major to pull Britain out of the 'European Exchange Rate Mechanism' in 1992 - claimed the collapse in the value of the pound on Friday could be even bigger than Black Wednesday if Britain votes for Brexit and he warned it would leave people poorer.

Currency and stock markets have been on a roller-coaster ride during the referendum campaigning, plunging over the past fortnight as a succession of polls showed a Brexit lead.

The Post Office said overall currency sales in its branches and online were up 74 per cent since the weekend. Online, sales were up 381 per cent on the same day a year ago. 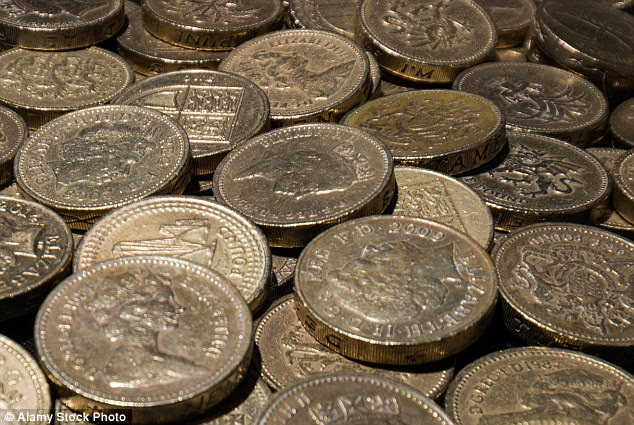 Right call?: The pound has now leapt 1.2 per cent against the dollar to $1.4880, its highest level since December, but have currency traders called it correctly or have they been too reliant on the bookies?

Travelex said its online currency orders had increased by 30 per cent from June 14 to June 21.

But it is not just holidaymakers worried about losing out in the face of a Brexit vote.

In the City of London banks - including UBS, HSBC, Morgan Stanley and Bank of America Merrill Lynch - have written to clients telling them to prepare for disruption once the EU referendum result is declared.

According to an article in the Times today, the banks said that they could not guarantee to 'make a market' by acting as intermediaries between buyers and sellers. If so, the Bank of England might have to step in to buy assets as a 'market maker of last resort', as it did in 2009.

Voting got underway this morning amid torrential downpours as analysts said that currency traders have been using the bookies and polls to gauge the likely referendum result.

A phone survey from ComRes for ITV gave the Remain camp 54 per cent of the vote compared to Leave's 46 per cent, while YouGov had victory at a much slimmer margin with just 51 per cent voting to Remain against Leave's 49 per cent.

The last poll from IPSOS Mori put Remain in the lead with 52 per cent, while the Leave camp was at 48 per cent.

At the same time a Remain vote is now 84 per cent on according to odds compiled by Betfair, compared to 22 per cent for Leave. Ladbrokes puts the chance of Brexit at only 27 per cent.

FXTM chief market strategist Hussein Sayed said: 'The markets are being completely reliant on the predictions from the bookies, which strongly expect Remain to win the referendum.'

He added: 'There is currently no real explanation to provide as to why city firms are confident on a remain outcome, although it does appear to me as if the correlation between the probability from bookmakers is what is being mirrored in the markets.

'The risk with this is that the market are currently discounting against the repeated indications from preliminary polls that have indicated again and again that the outcome should be close.'

And worryingly the polls have also revealed that as many as 17 per cent of voters are still undecided about whether they will vote Remain or Leave and this has made many in the City nervous.