"Something is Going On" – And It's Worse Than You Thought 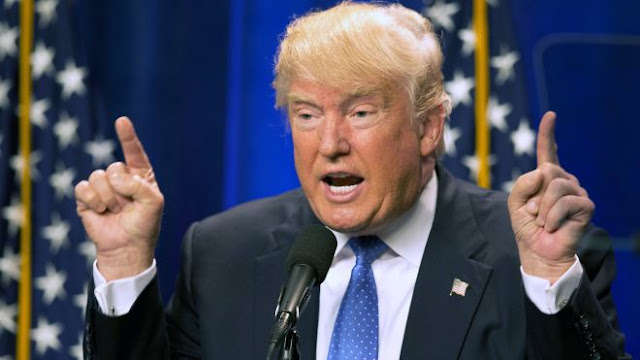 Submitted by Justin Raimondo via Anti-War.com,

I used to wonder why in the heck right-wing commentators on Fox News kept repeating the same mantra over and over again: sitting through the Republican debates, my eyes glazed over when I heard each and every candidate denounce the Obama administration for refusing to say the Sacred Words: “radical Islamic terrorism.” What are these people talking about, I thought to myself: they’re obsessed!
In short, I wrote it off as Fox News boilerplate, until the other day when, in the wake of the Orlando massacre, Donald Trump said the following on Fox:

“Something is going on. He doesn’t get it, or he gets it better than anybody understands. It’s one or the other.”Reiterating this trope later on in the same show, he averred that the President “is not tough, not smart – or he’s got something else in mind.”

The Beltway crowd went ballistic. Lindsey Graham had a hissy fit, and other Republican lawmakers started edging away from the presumptive GOP nominee. The Washington Post ran a story with the headline: “Donald Trump Suggests President Obama Was Involved With Orlando Shooting.” Realizing that this level of bias was a bit too brazen, the editors changed it an hour or so later to: “Donald Trump Seems to Connect President Obama to Orlando Shooting.” Not much better, but then again we’re talking about a newspaper that has a team of thirty or so reporters bent on digging up dirt on Trump.


“Media fell all over themselves criticizing what Donald Trump ‘may have insinuated about @POTUS.’ But he’s right:”

The tweet included a link to this story that appeared on Breitbart: an account of a 2012  intelligence report from the Defense Intelligence Agency predicting the rise of the Islamic State in Syria – and showing how US policy deliberately ignored and even succored it. Secured by Judicial Watch thanks to the Freedom of Information Act, the document says it’s very likely we’ll see the creation of “an Islamic State through its union with other terrorist organizations in Iraq and Syria.”

And this won’t just be a grassroots effort, but the result of a centrally coordinated plan: it will happen because “Western countries, the Gulf states and Turkey are supporting these efforts” by Syrian “opposition forces” then engaged in a campaign to “control the eastern areas (Hasaka and Der Zor) adjacent to Western Iraqi provinces (Mosul and Anbar).”

This is precisely what happened, and, as we see, the Iraqi Army is now in the field – with US support – trying to retake Mosul and Anbar, with limited success. Yet it’s not like we didn’t know this was coming – and didn’t have a hand in creating the problem we are now spending billions of dollars and even some American lives trying to “solve.” Things are turning out exactly as the DIA report said they would:


“[T]here is the possibility of establishing a declared or undeclared Salafist Principality in eastern Syria (Hasaka and Der Zor), and this is exactly what the supporting powers to the opposition want, in order to isolate the Syrian regime, which is considered the strategic depth of the Shia expansion (Iraq and Iran).”

And who, exactly, are these “supporting powers”? The anonymous author of the report points to “the West, Gulf countries, and Turkey.” Last I heard, the US is part of the West – although the way things are going, that may not be true for very much longer. And of course the US has had a policy of supporting the “moderate” Syrian Islamist “opposition,” which ended in massive defections from the so-called Free Syrian Army to openly jihadist outfits like al-Nusra and ISIS.

There was a split in the administration over this policy, with then Secretary of State Hillary Clinton and then CIA director David Petraeus arguing for a full-scale effort to overthrow beleaguered Ba’athist strongman Bashar al-Assad with massive aid to a loosely-defined “opposition.” Petraeus even openly argued for arming al-Nusra – the Syrian affiliate of al-Qaeda – and there were indications that, before Hillary left Foggy Bottom, an arms pipeline was opened up between the Libyan jihadists we aided in overthrowing Ghaddafi and their Syrian brothers.

Obama was reluctant to get more involved, but Hillary and Petraeus were gung-ho, along with the usual “humanitarian” interventionists in the administration and the media, who were accusing the President of standing by while “genocide” was being carried out by Assad. In reality, the jihadists were chopping off heads and wreaking just as much devastation as the Syrian army, but these facts didn’t make it into the media narrative.

In any case, the administration split was finally resolved when the President announced he was going to intervene in Syria with air strikes. This provoked a huge backlash from flyover country, with congressional switchboards tied up and protests coming in fast and furious. Clearly, the American people didn’t want another war in the Middle East, and, one by one, members of Congress who had planned on voting yes began to back down. The President backtracked – happily, I imagine. Hillary, who had alreadyleft the administration, was handed her final rebuke. Yet the seeds planted by her Syria policy would soon sprout into flowers of vil.

War was avoided, at least for the moment – but the prediction of that anonymous DIA agent was coming true. As thousands of US-trained –and-equipped rebels joined ISIS, along with the arms and other goodies provided courtesy of the US taxpayers, their leader declared the “Caliphate” and expanded its operations into North Africa, Europe – and the US.

The long reach of the Islamic State has been felt in this country twice in recent months: first in San Bernardino, and now in Orlando. Both terrorists traveled to Saudi Arabia, ostensibly for religious purposes, where they may have received training – and instructions.

When Omar Mateen opened fire in that Orlando nightclub, killing fifty people and wounding nearly one-hundred, the monster we created came back to haunt us. It didn’t matter that he may not have had direct links to ISIS: inspired by them, he carried out his grisly mission as he swore allegiance to Abu Bakr al-Baghdadi, the “Caliph” of the Islamic State.
The Washington Post, in its mission to debunk every word that comes out of Trump’s mouth, ran an article by Glenn  Kessler minimizing the DIA document, claiming that it was really nothing important and that we should all just move along because there’s nothing to see there. He cited all the usual Washington insiders to back up his thesis, but there was one glaring omission: Gen. Michael Flynn, who headed up the DIA when the document was produced and who was forced out by the interventionists in the administration.

Here is what Flynn told Al-Jazeera in an extensive interview:


Al-Jazeera: “You are basically saying that even in government at the time you knew these groups were around, you saw this analysis, and you were arguing against it, but who wasn’t listening?

Flynn: I think the administration.

Al-Jazeera: So the administration turned a blind eye to your analysis?

Al-Jazeera: A willful decision to support an insurgency that had Salafists, Al Qaeda and the Muslim Brotherhood?

Flynn: It was a willful decision to do what they’re doing.”

Of course, Glenn Kessler and the Washington Post don’t want to talk about that. Neither do the Republicans in Congress, who supported aid to the Syrian rebels and wanted to give them much more than they got. They’re all complicit in this monstrous policy – and they all bear moral responsibility for its murderous consequences.

Gen. Flynn, by the way, is an official advisor to Trump, and is often mentioned as a possible pick for Vice President.

The idea that we could use Islamists to fight jihadists was always crazy, and yet that is what the foreign policy Establishment and the congressional warhawks in both parties have been pushing. The “Sunni turn,” initiated by the Bush administration, supported (and funded) by the Saudis, the Turks, and the Gulf states, and escalated by the Obama administration, has empowered our worst enemies and endangered the American people. And here is the ultimate irony: it was done in the name of “fighting terrorism.” This gives new meaning to the concept of “blowback,” CIA parlance for an action (often covert) that has the unintended consequence of blowing back in our faces.

It certainly blew back in the faces of those partygoers in Orlando – in a hail of bullets.
That Trump gets this is little short of amazing, and yet truth often comes to us in unexpected ways. He may be an imperfect vessel – and that is surely an understatement – but he is absolutely correct in this instance: this administration and this President either “doesn’t get it, or he gets it better than anybody understands. It’s one or the other.”

The media and the Never Trumpers leaped on this statement and translated it into the old Obama-is-a-secret-Muslim trope, but that’s not what he was talking about.

He was talking about the largely unknown history of our intervention in Syria, where Hillary Clinton was the jihadists’ best friend and benefactor. It was she who led the charge to “liberate” Syria, to arm the “moderate” head-choppers and do to that war-torn wreck of a country what she had done to Libya. Obama knows it: and so does the media. But their lips are sealed.

Fortunately, mine aren’t.
So we finally unlock the Great Mystery: why oh why does is this administration and the Clinton campaign so reluctant to utter the words “radical Islamic terrorism”? Is it because of political correctness and a fear of inciting “Islamophobia”? Don’t flatter them: they’re not above that, when it serves their purposes. But it doesn’t serve their purposes this time.

What they’re afraid of is alienating their allies in the Middle East – not just the jihadists they’ve funded and succored in an effort to overthrow Assad, but primarily the Saudis, the Turks, and the Gulf sheikhs who are all in on the game and are playing it for all it’s worth. And of course there’s the Clinton Foundation, which has received millions in “donations” from the Saudi royals and their satгellites.

The US policy goal in the region is to block the Iranians and their Shi’ite allies, including Syria’s Assad, from expanding their influence in the wake of the failed Iraq war. That war installed a Shi’ite regime in Baghdad, and in order to protect our vaunted ally Israel – which is set on regime change in Syria – we are backing and have been backing Sunni radicals, precisely those “radical Islamic terrorists” whose name will never pass Hillary Clinton’s lips.

We’ve been pointing this out on this site for years: I’ve written about it extensively.

And now the Republican candidate for President is talking about it. To all those well-intentioned hand-wringers out there who think I’ve gone overboard in my coverage of Trump, contemplate that amazing fact for a while – and then get back to me.