"Never seen anything like it. These are once-in-a-lifetime moves, bigger than Lehmans and Black Wednesday," 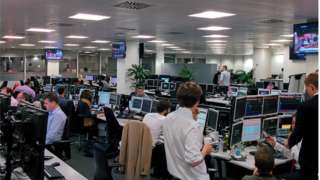 Banks were especially hard hit, with Barclays and RBS falling about 30%.

Earlier, the value of the pound fell dramatically as the referendum outcome emerged. At one stage, it hit $1.3305, a fall of more than 10% and a low not seen since 1985.

The Bank of England said it was "monitoring developments closely" and would take "all necessary steps" to support monetary stability.

What next for the world's central banks?

"This is simply unprecedented, the pound has fallen off a cliff and the FTSE is now following suit," said Dennis de Jong, managing director of UFX.com.

"Britain's EU referendum has been a cloud hanging over the global economy for the past few months and that cloud has got very dark this morning.

"The markets despise uncertainty, yet that is exactly what they're faced with this morning. The shockwaves are likely to reverberate for some time and the warning lights are flashing brighter now than ever."

Oil prices have also fallen sharply in the wake of the referendum outcome, with Brent crude down 5.2%.

Before the results started to come in, the pound had risen as high as $1.50, as traders bet on a Remain victory.

But following early strong Leave votes in north-east England, it tumbled to $1.43 and then took another dive after 03:00 BST as Leave maintained its lead.

The move in sterling is the biggest one-day fall ever seen.

A weaker pound buys fewer dollars or other foreign currencies, which makes it more expensive to buy products from abroad. However, it should benefit exporters as it makes their goods cheaper abroad.

The euro also fell 3.3% against the dollar, its biggest one-day fall since the currency's inception.

Currency traders say these moves are more extreme than those seen during the financial crisis of 2008.

"Never seen anything like it. These are once-in-a-lifetime moves, bigger than Lehmans and Black Wednesday," said Joe Rundle, head of trading at ETX Capital.

"We're waiting for the big money to crank into action over the coming days and even weeks, which will likely exert further downward pressure on sterling."

David Tinsley at UBS said there would be "a significant rise in economic uncertainty" and that the Bank of England's Monetary Policy Committee (MPC) was expected to take action, including interest rate cuts and an extension of its quantitative easing programme.

"We expect the MPC will cut policy rates to zero and make further asset purchases, in the first instance of £50-75bn, not later than February 2017," he said.

Around midnight, sterling had risen to $1.50 after leading Leave campaigner Nigel Farage said it looked as though Remain had "edged" the vote.

But those gains were short-lived as the first results showed surprisingly strong votes to leave the EU.

"The Bank of England is monitoring developments closely," the Bank said in a statement.

"It has undertaken extensive contingency planning and is working closely with HM Treasury, other domestic authorities and overseas central banks. The Bank of England will take all necessary steps to meet its responsibilities for monetary and financial stability."

In Tokyo, the Nikkei 225 share index has fallen by more than 8%, with the yen up 5% as investors piled into the Japanese currency, which is seen as a safe haven.
The Bank of Japan (BoJ) said it stood ready to supply money to the markets if necessary.

"The BoJ, in close co-operation with relevant domestic and foreign authorities, will continue to carefully monitor how the [UK referendum] would affect global financial markets," the Bank's governor, Haruhiko Kuroda, said in a statement.

Japan's finance minister, Taro Aso, said he was ready to respond to movements on the currency market if necessary to prevent "extremely nervous moves".

A increase in the value of the Japanese yen hurts the country's exporting companies.