Eddie van der WaltVerified account‏@EdVanDerWalt
I have never seen anything like this. Gold's biggest rally since 2008. #Brexit 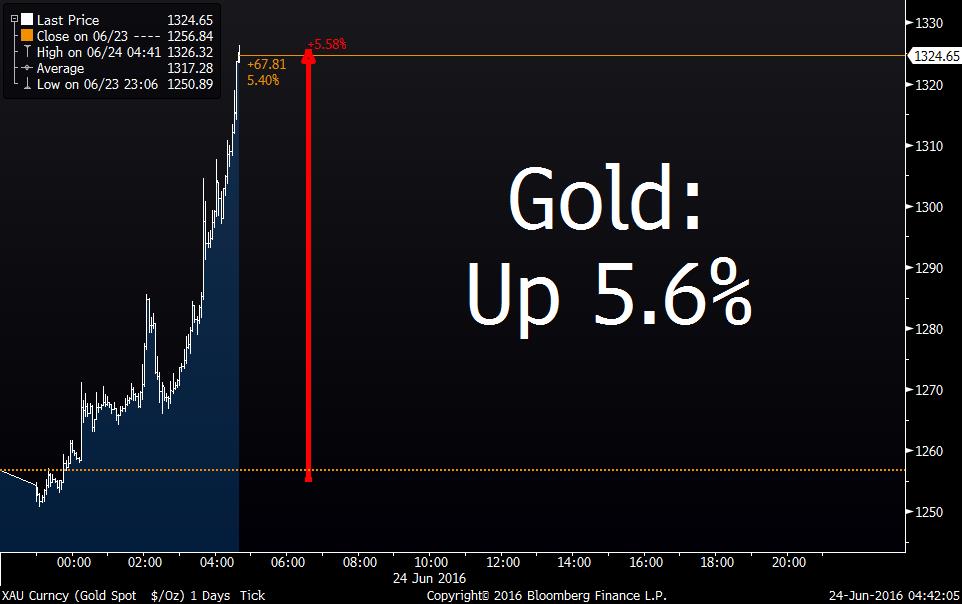 And these were the scenes yesterday

Meanwhile In London, A

When one thinks of lines of people waiting patiently to obtain "hard currency", one may think Russia, as was the case in December 2014 when the currency was plunging...

... or even Geneva in the aftermath of the shocking January 2015 Swiss revaluation:

... one would certainly not expect it in the city considered by many as the capital of capitalism: London.

And yet, as the FT shows in what may be the first of many such stunning images, "long queues stretched outside foreign exchange bureaux in the City of London on Thursday as people cashed in their pounds ahead of the EU referendum." Line in front of a Longon foreign exchange bureau.

More from the FT:

In scenes reminiscent of the queues that formed outside branches of Northern Rock and led to its collapse in 2007, City workers queued impatiently around the block outside forex bureaux on Wednesday afternoon. Summaya, a 31-year-old employee of a retail bank who declined to give her surname, lined up outside the Foreign Exchange Services shop on Cannon Street. She said she was going to change “several thousand pounds” into US dollars and euros because she was convinced the public mood was shifting in favour of Brexit.

“I’m protecting my money. I will stick it under the mattress until Friday,” she said, adding that Tuesday night’s televised debate had swung opinion among her friends and colleagues in favour of Brexit. “People are changing their views.”

Odd: one would not get that impression based on the several moneyed bettors who were skewing the bookies lines. Luckily, sentiment on the ground is avaiable and much more actionable than manipulated indirect data. In any case, this is what is really taking place in the UK as of this moment:

The Post Office said Tuesday’s sales of foreign currency were nearly four times higher than the same date last year, while sales in branches were nearly 49 per cent higher. Currency sales on Tuesday were up 74 per cent year on year, said the Post Office.

Thomas Cook said: “There’s been a surge in customers buying euros in the last six weeks and euro sales have been consistently strong, building day by day.”

Several economists predict a Leave outcome would trigger a dramatic fall in the pound when markets open on Friday, while a vote to Remain should see the pound rally. But several analysts said this week’s sharp sterling recovery probably limited the scope of the currency’s rise.

Daniel Priori, an Italian who has been working as a cashier at the International Currency Exchange kiosk at Waterloo station for a year, said he and his two colleagues had dealt with many more customers than usual.

Asked why, he replied: “Because they are scared about tomorrow.” He said the majority of transactions were people changing sterling into euros.

To be sure, not everyone is terrified of the inevitable collapse in sterling in case of Brexit (which is what the Scaremongering campaign is all about). Some just want some vacation money...

[S]everal of those queueing were exchanging their holiday money. Standing in a queue outside Thomas Exchange on Cannon Street, 44-year-old Chris Nobbs, who works in insurance, said: “I go to Alicante in Spain in a couple of weeks, so I’m just taking my euros out today instead of next week. I do not take more than what I need on holiday, but who knows, maybe this will earn me some extra cups of coffee.”

In the queue outside City Forex, on Leadenhall Street, City worker Ed was planning to change “a few hundred quid” before travelling to Greece on holiday next week. “I don’t have a strong sense of the [referendum] result, but just want to hedge against the downside. I’ll change half now and half later,” he said.

... But it's safe to say that the vast majority of those lining up have far more existential concerns. Whether or not these are validated will be revealed as soon as the FX markets open for trading after the Brexit vote is released.