Stephen Cohen on developments after Brexit vote in Britain 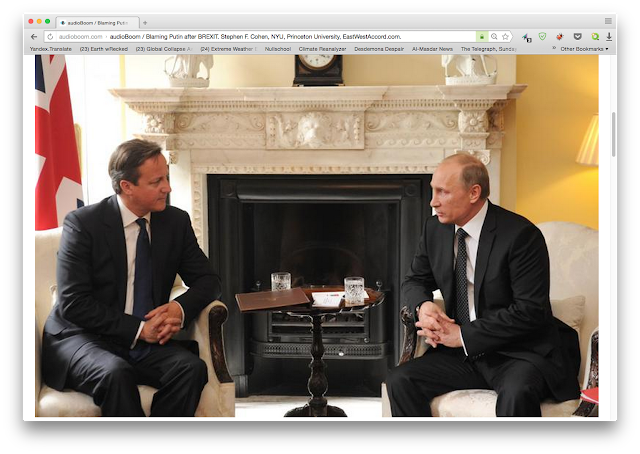 Writing in The Washington Post, McFaul said: "Putin, of course, did not cause the Brexit vote, but he and his foreign policy objectives stand to gain enormously from it."

But at least publically, that's not how Putin sees it.
Shortly after the vote, the Russian president told reporters that Brexit brought both "positives and negatives."

Putin, along with his prime minister, both warned of the unsettling effects of the vote on the financial markets. Despite EU sanction on Russia over Ukraine, the EU remains Russia's biggest trading partner.

"If the EU falls apart at the seams, this will affect our trade relations," warned Konstantin Kosachev, head of the Russian Parliamentary Foreign Affairs Committee.

It would, however, be naive to think Russia's hardline president, locked in a bitter rivalry with the West, isn't allowing himself a wry smile as a key European institution fragments.

There may be economic benefits for a start.

One new report suggests that trade between Britain and Russia could actually be boosted by the Brexit vote, especially with the British pound in free all.

And then there are sanctions.

Russia is currently suffering under tough measures imposed on it by the EU over Ukraine. Britain, along with the nations of Eastern Europe, has been among the strongest voices to keep the sanctions in place.

But even Moscow's Mayor, Sergei Sobyanin, can see how Brexit may have a positive impact for Russia.

"Without Great Britain in the EU, there is no longer anyone so stridently standing up for sanctions against us," he tweeted after the result.

Even if sanctions are not eased, the Kremlin may turn Europe's troubles to its advantage.

The scenes of chaos likely to emerge from Britain and the EU in the coming weeks and months will provide a stark contrast to the image of stability at home -- Russia strong under Putin, that the Kremlin strives to portray.