President Of The European Parliament: "It Is Not The EU Philosophy That The Crowd Can Decide Its Fate" 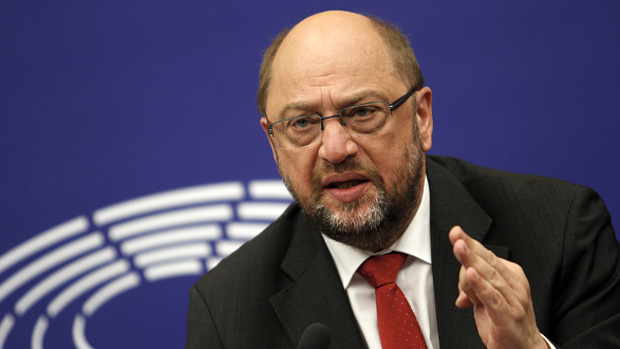 If anyone needs another confirmation that the European Union is fundamentally the most anti-democratic entity currently in existence, then the following statement by European Parliament Martin Schultz should put all confusion to rest.

The shockwaves and consequences around Brexit will resonate for years. It's probably an understatement to say that most in financial markets regret the UK's decision to leave but we should respect the forces that have been pushing us towards what has always been an inevitable political accident sometime soon. I wasn't sure whether the Brexit vote was the one but I was pretty convinced one was coming and this is probably not the last. Spain yesterday started a general election cycle (more below but relatively market friendly) of the largest 5 euro-area economies (Spain, Holland, France, Germany and Italy) over the next 18 months or so, not forgetting the US this November. Throw in the crucial senate reform vote in Italy in October and you've got plenty of opportunity for rebellion against the establishment that haven't managed to produce satisfactory enough growth for the lower paid/lower skilled to offset the forces of globalisation and immigration.

It's worth looking at the voting split in the UK's EU referendum based on polls compiled by Lord Ashcroft to get an idea of the disenfranchisement. In terms of socio-economic groups, 57% of ABs (upper/middle class - professional/managers etc) voted remain, 49% of C1s (lower middle class - supervisory/clerical or junior management/administrative), 36% of C2s (skilled working class) and 36% of DEs (Ds - semi & unskilled manual workers. Es - casual/lowest grade worker or state pensioner). So there's no escaping the fact that this is a class war. Whether its globalisation, immigration, inequality, poor economic growth or a combination of all of them it's quite clear from this and other anti-establishment movements that the status quo can't last in a democracy. Eventually you'll have a reaction. This is one such major reaction and given that the UK growth rate has been ok of late, it would be strange if pressure didn't continue to build elsewhere where growth has been lower for longer.

It is indeed a class war, and the European "Union" is not used to losing...

President of the European parliament, Martin Schulz said, “A whole continent is taken hostage because of an internal fight in the Tory party.”

http://theduran.com/president-european-parliament-says-uk-tory-party-blame-europes-failure/
President of the European parliament, Martin Schulz, has a talent for saying stupid things at opportune times…and the Brexit results are no exception.
Schulz, told the Guardian that EU lawyers were studying whether it was possible to speed up the triggering of article 50 of the Lisbon treaty, in order to rid Europe of those pesky, democratically minded Brits. Democracy is a virus to Brussels oligarchy, which if left untreated can spread to other EU colonies.

Schulz then went on a sore loser tirade which not only displayed his unstatesman-like demeanor, but also how out of touch he truly is with the European peasants he rules over.

The unelected President of the European parliament said uncertainty was “the opposite of what we need”, and then added this beauty…

“A whole continent is taken hostage because of an internal fight in the Tory party.”

“I doubt it is only in the hands of the government of the United Kingdom.”

“We have to take note of this unilateral declaration that they want to wait until October, but that must not be the last word.”

The UK’s Guardian reports that Juncker and Tusk, regretful that democracy was carried out, are now in favor of speeding up the UK’s exit.

We think they are bluffing, trying to show that in this break up, they are over the whole UK thing, and ready to date other states. Maybe Turkey or Ukraine will get a shot. Georgia also looks kind of cute…but they will always be second best to the United Kingdom.

Schulz’s comments were partially echoed by the president of the European commission, Jean-Claude Juncker, who said he there was no reason to wait until October to begin negotiating Britain’s departure from the European Union.

“Britons decided yesterday that they want to leave the European Union, so it doesn’t make any sense to wait until October to try to negotiate the terms of their departure,” Juncker said in an interview with Germany’s ARD television station. “I would like to get started immediately.”

The president of the European council, Donald Tusk, said the 27 remaining members of the bloc would meet next week to assess its future without Britain. “It is a historic moment, but not a moment for hysterical reactions,” he said.

ELITES ARE NOT THE German President Gauck said in an interview with the ARD about the growing patriotic protest movements and parties in Europe: “

Posted by seemorerocks at 12:41