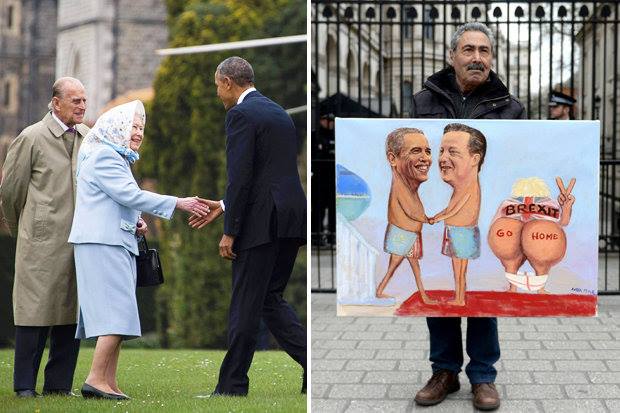 
Firstly, the very fact of the referendum is important. The European Union was founded without consulting the will of ordinary Europeans. It was a decision of the European elites supported by Washington and a club of fanatic globalists such as George Soros. No one asked the people, and it was decided without their will. There was the Soviet Union, and so European integration was aimed against our state and the Eastern European camp. However, the Soviet Union collapsed more quickly than was expected, and the European Union had to be completed under entirely different conditions than those in which it was founded.

In the early 1990's, United Europe was close to surprising the Americans. With no more enemies in the East, the French and German national elites aimed to create an independent security system, their own army, the EuroCorps, with a view to getting out from under NATO control, or at least from under US control. Logically, since Moscow dissolved the Warsaw Pact, it was time to dissolve the North-Atlantic Alliance too. Europe was capable of becoming an independent geopolitical player, even if not pro-Russian, then at least clearly not pro-American.

Then, the United Kingdom entered the stage as the United States’ main partner in the Old World. The Americans were once a British colony, but in the 20th century, the roles were changed, and now in political and strategic terms, England became Washington's vassal and satrap. These are the harsh realities of geopolitics; the center of Atlanticism has shifted even further to the West. So, Great Britain criticized all of Paris and Berlin’s initiatives aimed at creating a real Europe, a European Europe, not an American or Atlanticist one. And Britain fulfilled this role successfully. It didn’t intervene in the European Union’s business, but whenever the continental powers declared their position to be different from the American one, the British hastened to the rescue of Washington. Their vassal role required them to do so.

This was the case during the Iraq war. The British, not even accepting the euro, kept the pound, and it seemed like they were outside of Europe by themselves. But as soon as European countries conceived something different, something really European, London immediately became active, often standing on the side of the strangest “Europeans”, those mostly from the Baltic and Eastern European countries who quickly exchanged one master for another and began to rail against the old one. The barking agenda was, of course, decided in Washington, but Foggy Albion contributed a quite unpleasant, anti-European, Anglo-Saxon game veiled in an increasingly outmoded “high” arrogant style.

But now, the British have decided to leave. Brexit. However, after all, the people were not asked when they joined Europe in the first place, and to be honest, the English lose little by being in the EU. Mere trifles. The point of course is different. Who else needs United Europe anymore? The Eurosceptic parties of both right and left are winning in more and more countries, so the main trend is clearly the end of the European Union.

One thing is clear: Brexit means that the same forces that created the European Union, the same old globalist club, are now dissolving it for their own purposes, having become disappointed or now looking for a different strategy. Anyway, this will clearly lead to chaos. Such chaos has existed in the Middle East and the Arab world for a long time now, but now it is Europe’s turn. And everything is prepared for this. The British might be somehow simply fleeing a sinking ship. But they are not exactly safe.

If the British decide to stay, this means that Washington’s strategists will still fear that Europe can get out of control, and that under the threat of a fatal crisis they could accept the proposed alliance with Russia, for example. Moreover, Moscow has stressed that, in any case, the offer of friendship still stands.

European democracy is no longer the rule of the people, but the rule of the elites. Therefore, the people decide nothing. A pure society of the spectacle. Any democracy is but a cover for the elite’s power. Today, this has become obvious to everyone.“
http://katehon.com/article/brexit-nothing-personal
Posted by seemorerocks at 14:11

Email ThisBlogThis!Share to TwitterShare to FacebookShare to Pinterest
Labels: Grexit