CrossTalk on Brexit and the EU

This is VERY good.

Post-Brexit realities and challenges: What will the European Union do now – reform itself or double down? Will Brussels take on what is called the democracy deficit? And is there such a thing as an amicable political divorce? CrossTalking with Liam Halligan, Mary Dejevsky, and George Szamuely.


A Euromaidan for London?I kid you not.

This could have been written by Victoria Nuland.

With this shock a new, EU-friendly Britain is born
Natalie Nougayrède 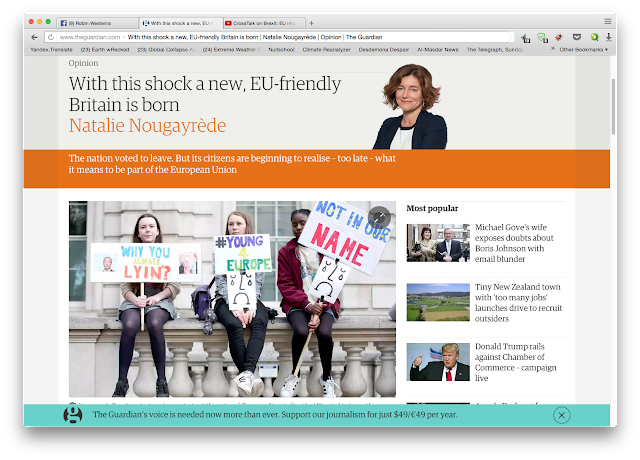 It is fascinating to note that in just a few days Britain has become a country where so many people are now ready to speak positively and passionately about EU membership. With Brexit-hovering seen as a near-death experience for an entire country, people are scrambling to express their emotions about wanting to stay in.

I can only think of one other country where there was a (relatively comparable) public groundswell of sudden pro-EU sentiment: that’s Ukraine, in December 2013, when a generation understood it was being deprived of a future it thought was all but guaranteed, and then made its frustration very clear.

Ukrainians flocked on to the main square of their capital after learning they were about to be denied plans for an association agreement with the EU. That was the start of the Maidan movement. Now in Britain social media is awash with calls to reject the breakup of links between the UK and the EU.

Tens of thousands signed up to join Tuesday’s event at Trafalgar Square, and more rallies are being announced. On Facebook, organisers said: “Regardless of the referendum result, we stand alongside the people of Europe to show we are inclusive, open and patient – we stay with Europe!”

This could be an ephemeral and geographically limited reaction. London voted massively for remain. One glimpse at the electoral map shows how the city resembles a large bubble detached from the rest of a mainly pro-Brexit England. Still, the passions that have been aroused are striking. Young people throughout Britain favoured remain by a huge majority of 75%. They now feel something has been stolen from them. Shock and disappointment can be powerful motives for wanting to take things into your own hands.

It is far-fetched to think this will develop into anything resembling Maidan. The contrast with Ukraine in 2013 hardly needs to be described. Britain is not an autocratic state with a president who single-handedly decided to abandon links with the EU because he was put under pressure by a large neighbouring power. Britain has held a free, democratic referendum whose result cannot be swept aside and whose consequences everyone will have to live with.

Yet some kind of awakening seems to be under way. It is happening too late, after the referendum battle has been lost, and in the midst of violent, immediate aftershocks (financial, political and even xenophobic), which no doubt add to the disarray. But it is also a reaction that may, over time, turn the tide of one people’s attitude towards the EU as a project.

A decades-old British cold and distant approach to the European project has given way to outbreaks of panic in the face of what is about to be sacrificed, and a frantic desire to hold on to it. Perhaps it’s only when you are about to lose something that you start to cherish it; perhaps it’s only when you find yourself confronted with unprecedented disruptions that you start to yearn for life to go on the way you believed it would.

Whatever lies ahead, Britain's young people will one day work towards correcting the failures of their elders

Whatever the scale of the anti-leave protests that seem to be developing, at least online, they represent a turning point. This British moment of shock and awe sets the scene for a new outlook on Europe. That pulling out of the EU is harmful to Britain’s national interests and especially those of its younger generation is a truth that has started to seep in, if ever it was doubted.

No satisfaction should be drawn from this, especially not from EU leaders as they gather in Brussels. Shows of schadenfreude or attempts to add pain to Britain’s self-inflicted humiliation would be the worst possible mistake – if ever Europe’s pieces can be picked up from here.

But if there is one bright side to an otherwise very dismal situation: it is that a sense of pro-European purpose and energy may now be appearing in a country where the EU had only ever been described in prosaic, if not hostile, terms. Britain is now discovering what it really meant to be part of a collective European endeavour.

Whatever lies ahead, its young people won’t forget this moment, and they will one day work towards correcting the failures of their elders. “Brexit not in my name” is trending on Twitter.


A new popular mood may be born, one in which the EU becomes a cause for engagement, for values and solidarity – not a scapegoat or a caricatured technocratic entity. If something good can be drawn from this referendum wreckage, it may be the beginning of a permanent, positive culture about Europe in Britain. That’s something that has never existed before. If only it had happened earlier.
Posted by seemorerocks at 11:44