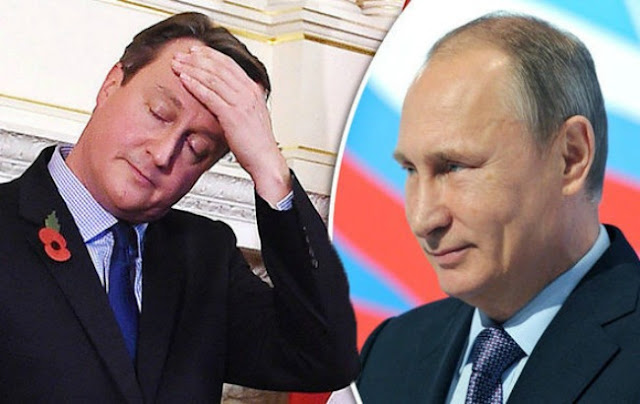 If there is a tide in the affairs of men, as Brutus said in William Shakespeare’s play Julius Caesar, it must be the same in the affairs of nations, too.
Less than a week ago, the North Atlantic Treaty Organization was creeping toward the borders of Russia and relentlessly provoking it, but the tide abruptly turned on Friday. Eurasian politics will never be the same again after Brexit.
Only last Wednesday, while addressing the Russian Duma in Moscow, President Vladimir Putin took Russia’s political elites into confidence that the nation was facing once again a menace on its borders similar to the Nazi invasion exactly 75 years ago.

However, two days later in Tashkent, Putin spoke calmly and in a detached tone, when asked for his reaction to Brexit. But he hintedhe is insightful enough to recognize the opportunity brought up by fate. Putin said:
Putin had most recently visited Greece, an EU country closest to Russia. Significantly, in the words of the Greek Prime Minister Alexis Tsipras, Brexit “confirms a deep political crisis, an identity crisis and a crisis in the European strategy.”

This would also be echoing the broad swathe of Russian opinion.
The Russian commentators on the whole feel elated that the Brexit vote will inexorably lead to a weakening of the EU sanctions. Indeed, they expect a significant improvement in Russia’s relations with Britain.

London is a favorite playpen of Russian oligarchs and Moscow elites. Boris Johnson, the UK’s most likely post-Brexit prime minister, has been a vocal supporter of warm relations with Russia, and the Moscow elites regard him to be an unusual politician who has no cold war mentality and even more interestingly, has no foreign policy mentality, either.
Clearly, the surmise among the Russian analysts is that Washington will be hard-pressed to impose its trans-Atlantic leadership in the same manner it used to, and the EU itself will be probably unable to reach a consensus on extending the sanctions against Russia beyond the end of the year. These are Russia’s best best.

However, Putin’s cautious words suggest that Moscow will keep its fingers crossed as to how Washington could afford to permit Brexit to be taken to its logical conclusion and simply allow the British people to leave the EU. Quite obviously, Putin neatly sidestepped any talk of European disintegration.

On the other hand, Moscow cannot be unaware that Euroskepticism is a pervasive phenomenon in Europe. If Brexit has a ‘domino effect’ and sets in motion referenda in other European countries as well, the unthinkable may happen. Even otherwise, the Euroskeptic groups in Europe have already strengthened their standing. Either way, while George Soros wrote in the weekend that the disintegration of the EU has become “practically irreversible,” he may have a point.

Clearly, there are question marks over Britain’s own survival. Russia stands to benefit here, too, because Britain has been traditionally not only the charioteer of US interests in Europe but also been an ‘arbiter’ of sorts within the EU, a role where it is irreplaceable.

In the face of mounting pressure from the West, Moscow lately began focusing on expanding its influence and consolidating its leadership in Eurasia. At the St. Petersburg International Economic Forum a week ago, Putin unveiled a Greater Eurasia project. All indications are that this also was a key agenda item for discussions with the Chinese leadership during his visit to Beijing in the weekend.

Putin visualizes a grand partnership within the ambit of the Greater Eurasia plan, involving Russia-led Eurasian Economic Union (EEU), China and, possibly, India and Iran – effectively expanding the ‘post-Soviet space’ toward East, West and South Asian directions.
Putin’s Greater Eurasia vision has three templates – security, common market and internal governance. The Russian intention seems to be to bring the cascading Chinese influence in the Eurasian space to be brought under negotiation within a multilateral format, especially China’s One Belt One Road initiative.

But China is unlikely to agree. China has had a field day as tensions began rising between Russia and the West under the shadow of the NATO build-up. But with Brexit, the power dynamic in Eurasia may be about to change dramatically in Russia’s favor.
Arguably, Brexit eases the pressure on Russia from the West and provides it with the respite to pay greater attention to the reality that in the recent years, China has been steadily expanding its influence in Eurasia – not only in Central Asia but also in the Balkans and Central Europe.

What matters most for Moscow will be whether Brexit will arrest the recent trend, encouraged in no small measure by Washington,toward militarization of Europe. The upcoming NATO summit in Warsaw (July 8-9) will now be taking place under the shadow of Brexit.

It may be a harbinger of things to come that Bulgaria and Romania last week voiced opposition to the idea of a NATO fleet in the Black Sea. The Bulgarian prime minister Boiko Borisov said on Thursday with a touch of sarcasm that the Black Sea should be a place where yachts and large boats filled with tourists sail rather than being a military arena.

Practical cooperation within the alliance may continue in the near term. But it remains to be seen how far Washington will succeed in keeping the European mind trained on the highly contrived thesis of Russia being a revisionist state that has put military mobilization at the center of its strategic thinking.
Brexit poses questions for NATO although the British people have not voted to leave the alliance. In an insightful commentary, the well-known ‘Russia hand’ at the National Interest magazine Nikolas Gvosdev noted that Brexit “validates two developing trend lines in Europe”. Gvosdev explained:

The first is the hesitation within Western European countries to want to be drawn into conflicts and problems happening on the eastern periphery of the continent or within the post-Soviet space.

The second will be to reawaken the lingering regional split within the alliance, with some members arguing that if NATO had paid much more attention to dealing with the cross-Mediterranean threats to European security, rather than on being drawn into playing geopolitical games in Eurasia, the migration crisis might have been avoided or blunted; and thus one of the key drivers of Brexit might have been neutralized.

The bottom line is that the EU and NATO are complementary. And Brexit upholds that national interests prevail over European collective interests. Without doubt, Brexit is also, partly at least, a reflection of the overall weariness in Europe with the continued NATO expansion eastward.