To make it clear, I think the idea that Putin stands to “win” by the collapse of Europe is a nonsense


Germany Says "We Won't Let Anyone Take Europe From Us" 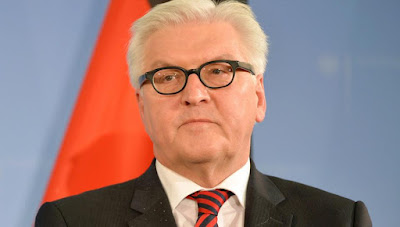 Yesterday we said that in the historic fallout and unprecedented confusion over Brexit, so far only one sure winner has emerged - namely Russia, where Vladimir Putin is watching the slow-motion collapse of this latest artifical aggregation of Europen states (a quick search of failed attempts at European integration results in tens of pages of results) with great interest and willingness to pounce at any opportunity - even as all of Europe is a loser, and nobody more so than Germany, whose chancellor Merkel is now watching her legacy go down in flames as first the UK, then France (National Front), Italy (Five Star Movement), Denmark (Danish People’s Party), and Holland (Freedom Party) have all called for either a EU referendum of their own or a renegotiation of their country’s EU membership.

As would be expected, the more worried and desperate Germany gets, the more ridiculous things Germany is apt to say. Case in point is what German Foreign Minister Frank-Walter Steinmeier said earlier today, when he tried to reassure onlookers that the EU would weather the shock of the British vote to leave the union as he convened crisis talks.

Well, one small nuance: Steinmeier wasn't focusing on the EU, he was far more concerned about Germany and how the one nation that has benefited more than anyone one else from the customers union and the common currency is struggling to keep up appearance that asll is well.

As Steinmeier was heading into a Berlin meeting with his counterparts from the EU's six founding members, he said the following: "I am confident that these countries can also send a message that we won't let anyone take Europe from us."

Or else? Because while "us" was meant to refer to the EU, he really meant Germany.

Steinmeier called the European Union "a successful project of peace and stability" and said that there was a "strong desire" within the bloc to defend and strengthen it. It would appear that tens if not hundreds of millions no longer agree.


The damage control continued when he said that "it is absolutely clear that we are in a situation in which neither hysteria nor paralysis are permissible." Indeed: which is why central banks, the G7 and the IMF all scrambled to prop up... the world's markets.

"We must not rush headlong into hectic action, pretending we had all the answers. But we must also not fall into depression or inaction after the British decision."

But didn't you have all the answers when you said that a vote for Brexit would assure financial armageddon? Odd how that changed so fast.

As AFP reported earlier, Steinmeier's French counterpart Jean-Marc Ayrault urged quick negotiations on Britain's exit from the union, saying that the pressure would be "very strong" on British Prime Minister David Cameron at an EU summit on Tuesday to speed up the process.

Cameron, who on Friday announced his resignation by October in the wake of the referendum, said it should be his successor who leads the complex negotiations under Article 50 of the EU's Lisbon Treaty which sets out a two-year timeframe to leave.

Ayrault said he and Steinmeier, whose countries long represented the twin-engine of European integration, were working on joint proposals that could deepen cooperation among EU members that use the euro currency, or bolster security and defence coordination. Steinmeier said the ministers would discuss joint action on the refugee influx, the unemployment crisis and security during their meeting scheduled to wrap up around 1000 GMT with a news conference.

* * *
Meanwhile, as Steinmeier scrambles to reassure naive onlookers how "peaceful and stable" the European project remains, what he is most worried about is not just another EU member nation quitting, but specifically a nation that is a member of the Eurozone, and shares the Euro. If that happens, it's all over.

As Barclays wrote overnight, the biggest potential worry is that another country, especially one that is also part of the EMU, might set out on a political path towards exiting the EU and EMU. While a country leaving the EU is a big event, one potentially leaving the EMU would be a much bigger deal. If markets start attaching a greater probability to an EU referendum (and a possible exit) in an EMU country, it could spark a return of redenomination risk and financial fragmentation, undermining business confidence and hampering business investment and growth.

A series of recent surveys and statements by some European parties suggest that this risk is real. Anxiety over immigration and a weak economic recovery have greatly eroded pro-EU sentiment in the euro area. A recent Pew survey found that roughly half or more of the population in large EU countries such as France, Spain and Germany viewed the EU unfavorably. The same survey showed that overwhelming majorities in most countries disapproved of the EU’s handling of refugees, as well as the economy. In a similar poll released by Ipsos Mori in May, nearly half of euro area citizens wanted a referendum on EU membership in their own country, including majorities in France and Italy (Figure 2). And in recent days, leading political parties in countries such as France (National Front), Italy (Five Star Movement), Denmark (Danish People’s Party), and Holland (Freedom Party) have all called for either a EU referendum of their own or a renegotiation of their country’s EU membership. These calls have become louder in countries such as Holland after the UK vote.

And as the following chart shows, the pain for Europe is just starting:

It appears that the trade now is not to sell Sterling, at least not anymore: one should have done that at 1.50 when everyone was wrong about the Brexit outcome based on manipulated polls as we explained ahead of the event. If anything, sterling will rebound following the positive boost to the UK economy following the devaluation. It's the long EUR trade we would be far more concerned about here...