The petition calling for a 2nd EU referendum

Two days after voting ‘out’ of the European Union, over 2 million Brits have signed a petition calling for a second vote, as many feel dissatisfied with the outcome of the referendum.

The petition on the British parliament website was posted before the June 23 referendum, urging the government to hold another vote on EU membership if the support for ‘leave’ or ‘remain’ campaigns will be less than 60 percent of the populace. Thursday’s referendum saw only 51.9 per cent of voters supporting the idea of exiting the bloc, while 48.9 per cent voted to stay. 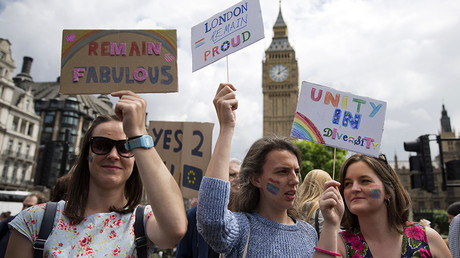 Only British citizens or UK residents have the right to sign the petition, and it has proved to be increasingly popular, with the number of signatories rising sharply on Saturday, at a rate of some 1,000 signatures per minute at one point. The website indicates the majority of those who signed the petition are based in regions where ‘stay’ support was strongest. This includes London, where people launched their own petition, calling on Mayor Sadiq Khan to declare the capital city an independent state and apply for EU membership.

Scotland was also among the regions that voted to remain in the bloc, with all 32 local authorities or roughly 62 percent of Scots backing staying in the EU. Scottish First Minister Nicola Sturgeon said on Saturday that the Scottish government will immediately engage in talks with the EU to protect Scotland’s position in the bloc.

She added steps were being taken regarding a possible second independence referendum.

Under UK legislation, the Parliament has to consider a debate within a year regarding any petition which attracts over 100,000 signatures. But any possible debate would have to take place quickly if current Prime Minister David Cameron is to be present. The leader of the Conservative Party said Friday he would be stepping down in the wake of the vote, as he had forcefully backed the ‘Remain’ campaign to keep Britain in the EU.

Apart from petitioning the Parliament, Brits have been voicing their anger at the referendum results in rallies that took place on Saturday in London and Newcastle.

Hundreds of young Britons gathered near the Houses of Parliament in London, angry that the voting campaign didn’t give them enough information on the consequences of the vote and that the decision to leave could put their future in jeopardy

We heard about the big petition, but who is the author?

The #EUReferendumPsyop continues in the form of a petition calling for a second referendum. So far, 2.1 million people have signed it.

No-one seems to be asking the simple question, who is “William Oliver Healey”?

From the beginning, the UK Column alone has described the entire referendum process as a “psychological operation”. We have stated that that operation is designed to:
We pointed out that somehow David Cameron had managed to have his friends and colleagues placed in charge of the Leave Campaign, controlling the opposition debate on one hand, and sidelining UKIP in the process without anyone other than UKIP supporters seeming to worry about it. The aim here, we allege, was not so much to make sure the final result was to Remain, but to make sure that the subject matter of the debate was restricted to jobs and immigration.

The aim was to divide. The outcome was irrelevant.

As the “campaigns” ran, with Remainers campaigning for Leave, Leavers suddenly jumping ship to Remain and vice versa, it should come as no surprise, perhaps, that there is a possibility that “William Oliver Healey”, now running a petition for a second referendum, should have campaigned for Leave.
Now, at this point, I must point out that I have no confirmed evidence that the person I am about to present is the author of the petition. I am, at this point, asking the question, is he?

The William Oliver Healey that I would like to draw to your attention was a student at de Montford University in Leicester, where he studied politics. He stood for the Disabled Students’ Representative role at the Student’s Union, claiming to suffer from Asbergers. Following his university career, he joined the English Democrats, for whom he stood in 2014 asMEP for the East Midlands euroregion. During that campaign he wrote:

“As a personal opinion of my own devising: I believe it is time that the 7.5million economic migrants who came here to economically enrich themselves and who have failed to integrate should now be returned to their place of national origin.”

William Oliver Healey campaigned tirelessly for the LEAVE side during the referendum campaign.

(…) Is this the same William Oliver Healey who created this petition?
Continue this article at UK Column

EDITORS NOTE: Upon closer examination after downloading the data from this petition, it appears that a great number of the signatures are from an array of foreign countries ranging from Cuba, to Mauritania, to Algeria, Argentina, Burundi, Iran and even Moldova, along with dozens of others. It’s possible that an overwhelming majority of the petition’s ‘signatures’ are from overseas. Very odd, and in such a short space of time. Could this be the work of automated software, also known as ‘internet ‘bots’?

The Liberal Democrats will stand at the next general election on a platform of derailing Brexit and keeping Britain in the European Union, the party has announced.

Leader Tim Farron said on Saturday night that he would be “clear and unequivocal” with voters that if elected it would set aside the referendum result and keep Britain in the EU.

The two central promises of the Leave campaign were to return taxpayer funding of the EU to the NHS in Britain, and to put a stop on immigration. Just 48 hours after the vote, these promises have been abandoned.

UKIP leader Nigel Farage appeared on Good Morning Britain the morning after the Brexit vote, to dispense with promise number one. Asked if the Leave campaign would now honour it’s promise to give the £350m a week which Britain currently spends on its EU membership to the NHS, Farage answered with a simple ‘No.’

This, despite a giant red bus trawling the country throughout the campaign saying quite the opposite.

The former stockbroker went on to claim the entire idea had been a big ‘mistake’ by the Leave campaign which he’d never signed up to.


However, video has since emerged showing Farage himself pledging those EU millions to the NHS on BBC Question Time.

But this is not the only promise, or indeed the biggest, that the Leave campaign has broken since the Brexit vote.

The figureheads of the campaign are now all relentlessly backtracking on the central pledge of the campaign – which was to curb immigration. Prior to the Brexit vote, the promise to (primarily) working class Britons was: Vote out, and secure your borders.

The Canary warned our readers prior to the vote that this promise would never be upheld. We wrote:

Those who wish to see Britain cut immigration dramatically are going to be bitterly disappointed in the event of a Brexit vote. The economics embraced by David Cameron and the conservatives doesn’t permit protectionism – or ‘looking after our own’. This is why they do nothing for working class Britons losing jobs because their bosses choose to exploit immigrant labour. This is why they do nothing when companies ship British jobs overseas to exploit workers in far away countries. They are not patriots, or nationalists. They think as part of a trans-national capitalist class. The bottom line for them is the profit and loss accounts of themselves and their peers, not the personal aspirations of 31 million working people in Britain, or the near 2 million unemployed. The right can rest assured that if Britain leaves the EU and the Conservatives stay in power – there will be every bit as much, if not more, exploitation of immigrant and overseas labour, and all the losses of jobs, wages and working conditions that go along with it.
Just hours after the vote, prominent members of the Leave campaign were already confirming this nightmare scenario. The conservative plan for Brexit will likely seek to retain free movement of labour across the EU, meaning zero decrease in immigration – and possibly an increase if future trade deals relax free movement of labour laws with other nations.

And now, we enter period of chaos.

The SNP have, rightly, moved to deliver a second referendum on Scottish Independence. In all likelihood, this vote will be successful. Membership of the EU is a deal breaker for most Scots – so the remainder of the UK can kiss goodbye to Scotland.

Lawmakers in Northern Ireland are also now seeking independence, flung into an argument on the nation’s fate in the UK which may very well reignite the still simmering tensions that have blighted the nation for too long.

There is even an, at this stage at least, speculative campaign to make London an independent city-state, which would remain within the European Union.

In the bizarre (but no less bizarre than the position in which we now find ourselves) event that all these moves come off – Wales and the rest of England would be left behind wondering what on earth to do with ourselves. In effect, the premise of the Brexit vote would be turned on it’s head. Wales and England would not have voted to leave the EU, but instead, the UK – with the rest of the UK remaining together and in the EU.

All this, for broken promises by opportunistic politicians who couldn’t care less about those who voted for their cynical campaigns. Let us hope we can come together in the wake of it all to build a better Britain together.