A visit south and many thanks
Seemorerocks 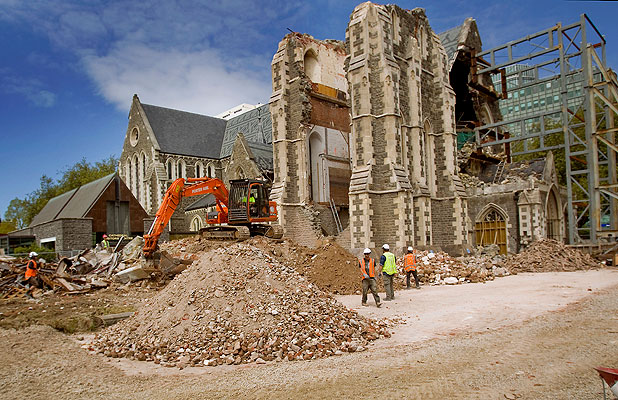 I took my first trip away down to my native Christchurch for two years and my first (this time, entirely enforced) break from the keyboard in five years (if you leave two brief periods in hospital).

What it means of course is that if I felt overwhelmed by cascading events I now feel quite overwhelmed with the Brexit vote taking place 24 hours after my return and a preponderance of terrible climate news.

Firstly I would like to extend my sincere thanks and gratitude to those that generously gave to me – amounts ranging from $10 to $500.

I cannot thank everybody individually so I would like to say many thanks to:

I am quite overwhelmed by people’s generosity and it gives me the strength to continue to do the best that I can.

THE TRIP TO CHRISTCHURCH

Overall the reason for my trip was to catch up with a very dear childhood friend and with another cousin.  These, along with a revisit to my beloved Sumner where I grew up were the highlights of my visit. 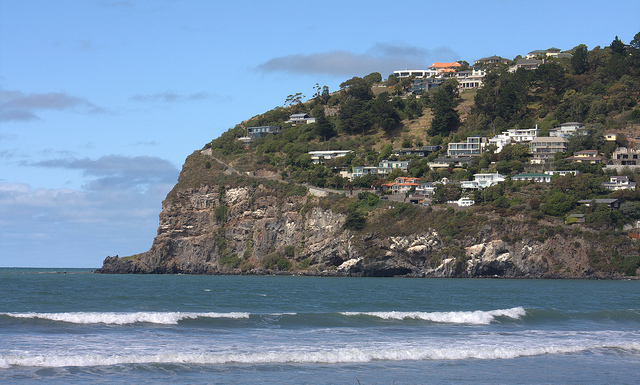 Whitewash Head,Sumner as I remember it.. 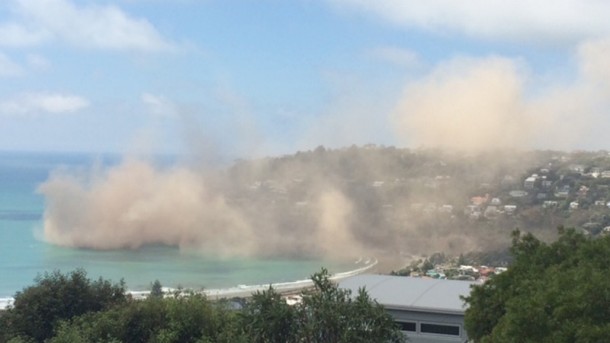 And in a recent quake

But here are a few other observations.

Once you know you cannot unknow

And there were reminders everywhere of what is happening to our society and planet with incredible rapidity.

No getting way from it.

Taking off in the plane both Pam and I agreed that it looked “strange” - as if we climbed through a roof of water vapor covering the land to a space between that and another layer of high cloud.

When I go to Christchurch I always pack my winter woolies as it is almost invarably cold. I have never been so cold in my life as in peoples’ houses in Christchurch,

Even though I packed sandals almost as an afterthought I felt overheated the entire time I was there.

The temperatures reached 18 degrees Centigrade (64F) on the shortest day of the year.

This was made worse by the heating still being on in cafes and in the hostel where we stayed despite the heat.

People I spoke to seemed to have no idea that this was at all unusual although temperatures were 8-10 degrees higher than normal.

What happened to Christchurch frosts?

The other impression coming in to land was just how flat and close to sea level the whole place and the total lack of domestic animals (and I really mean sheep) in the paddocks. 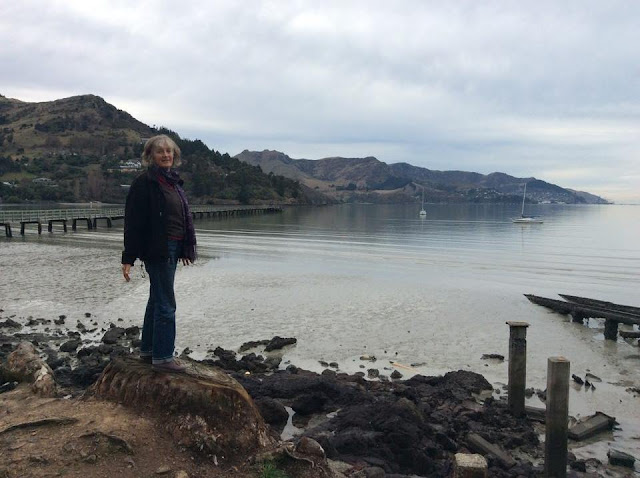 Despite the devastating earthquake and destruction by corporate vandals Christchurch has its unequaled beauty - its harbour and its trees. This is Governors Bay in Lyttelton Harbour

Socially, the situation is of course depressing.

Everyone Is having a hard time and is overwrought from the experience of the last 5 years. Examples were of people giving up drinking coffee because their nervous systems couldn’t take it, or of the cyclist who shouted out obscenities when we stopped our car backing out of a parking area to let him pass.

Pam was on a walk and was about to have a look at an area of garden but was warned off because this was a tent city inhabited by the homeless. These people are looked after by the local Beat St cafe which provides free cups of coffee paid for by those who can afford to buy an extra cup. Every Sunday the homeless line on the denuded Latimer Square up for a free meal provided a Chinese tax driver. 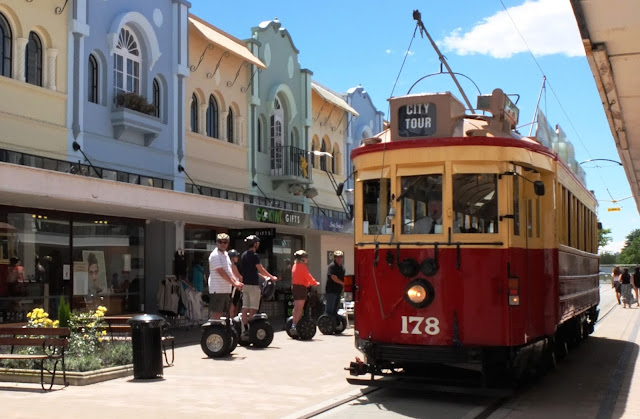 I enjoyed coffee on the restored New Regent Street

We did a tour on the restored tram which took us into what had been the Red Zone. There were signs of things coming to life – such as cafes being set up in the gaps between buildings on the devastated High St. These are all wonderful initiatives coming from the ‘bottom-up’ - signs of creativity and innovation by the People. 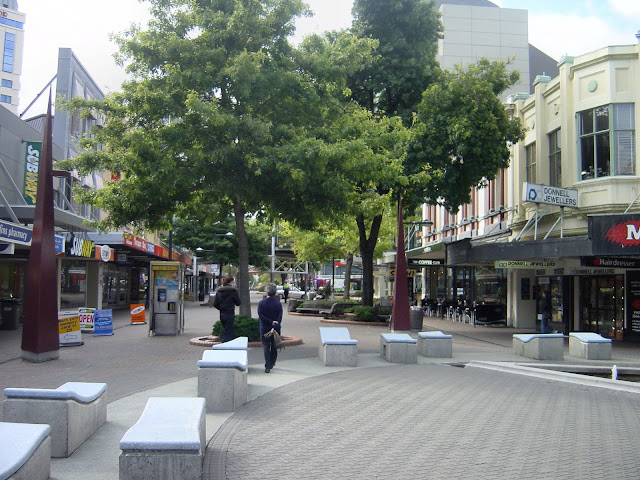 This is how I remember High Street prior to the quake 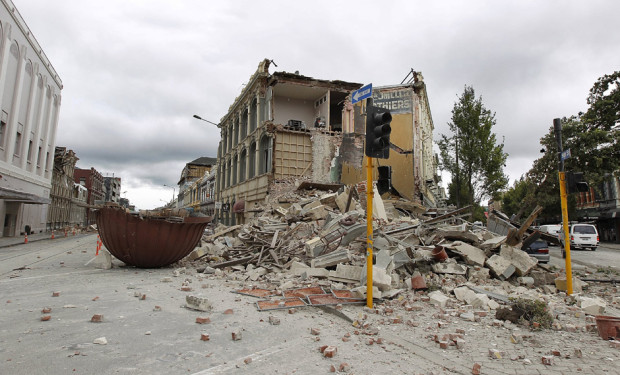 And after the February, 2011 quake 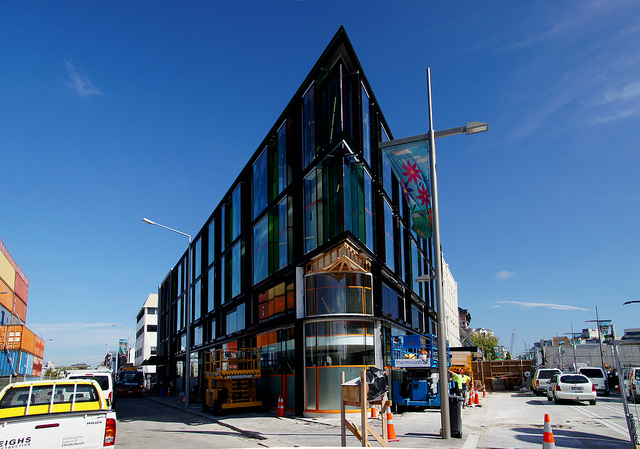 And the new look - sorry,no photos of my own

The official rebuild is not so impressive and there are many ugly examples of brutalist architecture replacing the historical buildings. An initiative by former mayor Garry Moore to provide affordable housing to the working poor is frustrateed by official red tape and bureaucracy while a Novotel hotel is being build right next to the disgusting new airport terminal – putting local hotels out of business -all this without a hitch.

There is corruption and backhanders that were never there before.

The behemoth, Fletchers Construction is refusing to provide insulation for houses it is building as replacement for people.

I was reminded that Christchurch used to be called the People’s Republic because of the care it gave to social housing and public needs.

As the city struggles to recover and the local Council under pressure from Central Government which has taken away democratic choice from the people of Canterbury the People’s Republic is being replaced by the Fascist Republic.

This was reinforced for me on my departure. 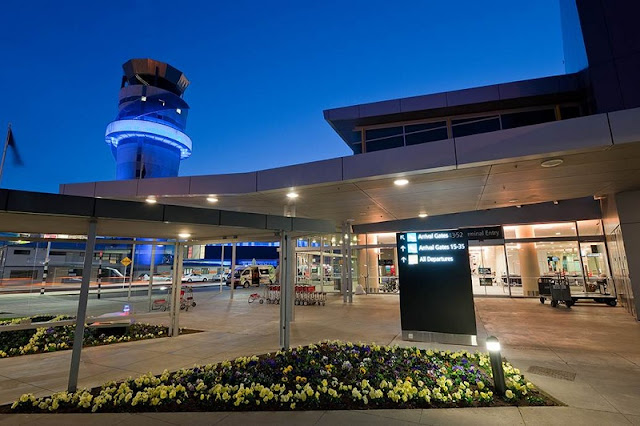 Instead of restoring the eastern suburbs or providing affordobale housing for people we have a new airport (with corporate hotel being built right next to the terminal building) and a convention centre. This is an airport built without human beings in mind - except for those who can PAY for luxury treatment.

In this huge new airport with false marble floor (no carpet) there was no seating for people like myself reliant on a walking stick to get around. When I finally hobbled up to security I was given ‘extra treatment ‘ by the security goon who gave me a specially-thorough frisking and made me take my boots off while he looked for a bomb in my ankle and boots (actually a steel plate) and frisked me all over.

Then off to the departure lounge where the overwhelming majority had the choice of sitting on a cold floor or standing in line.

A great farewell from the Brave New World of Christchurch, test case for Disaster Capitalism