An appreciation of Nigel Farage

On this day I would like to acknowledge UKIP leader Nigel Farage who,by achieving his goal of Brexit has arguably done himself out of a job.

Who are you Mr President? Nigel Farage asks Van Rompuy 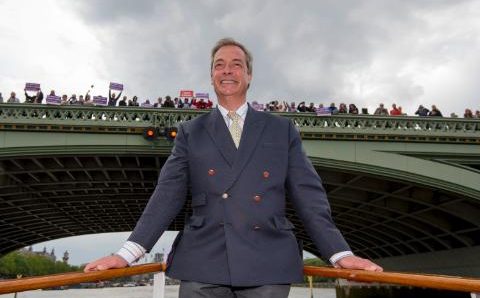 Love him or hate him, this is Nigel Farage's day - without him there would be no EU referendum

But measured by the difference he has caused in British politics, Mr Farage can fairly claim a place in British history. Whether you love or loathe the man, it is impossible to deny this simple fact: today's referendum would not be taking place if it were not for the efforts of Nigel Farage.

Yes, it was David Cameron who called the referendum, and won the Conservative majority required to do so. But he called that referendum in response to pressure from Conservative MPs, who were in turn responding to pressure from a United Kingdom Independence Party that Mr Farage turned into the stuff of Tory nightmares, largely by connecting the EU in voters' minds with immigration.

Whether we leave or remain in the EU after this referendum, today's vote will have the most profound effects on Britain, its politics, and its relations with the rest of the world.

Only history will judge whether those effects are positive or negative. It will also surely record that the man who can claim both credit and blame for all this is Nigel Farage.

For good or ill, he has achieved far more in his political career than most members of the Cabinet, let alone backbench members of a House of Commons he has repeatedly failed to enter.