Wunderground,
26 June, 2016
All in all this little chart illustrates how we are well on our way to the lowest year ever for Arctic sea ice extent: 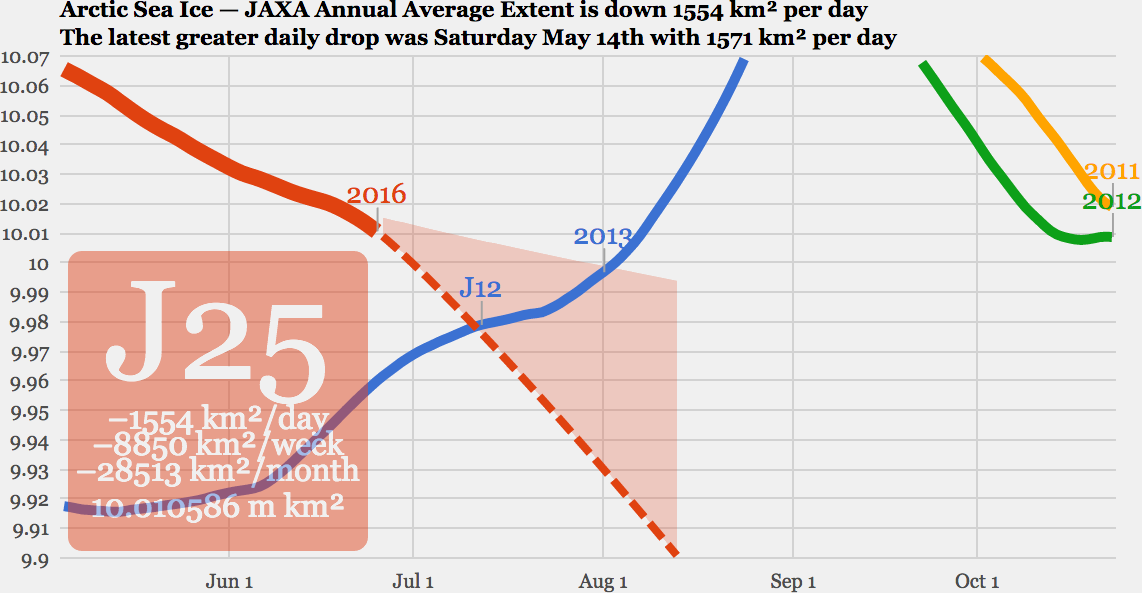 2016 is about .6m km2 lower than last year, so its AAE graph is falling fast. The graph is already as low as 2012 for late October, but a full 4 months earlier in the year. The significance is 2016 could continue its fall for 4 more months and be way lower than 2012 in late October, as long as the current ice extent stays well below that of 2015.

2013 is currently the only lower year, and we're on a clear path into uncharted territory. It's now virtually certain that 2016 will be lowest during July. Some very interesting times ahead, with the best chances yet for a Blue Ocean event in the early autumn.

The next major milestone of the Arctic sea ice collapse is 10 million km² AAE, and expected on July 1—7.

Why watch the Arctic sea ice?

In contrast to the land–based area around the South Pole, the opposite pole consists of sea ice floating on top of the Arctic Ocean, which makes it an excellent indicator for our rapidly changing global climate.
Why watch the Arctic sea ice in 2016?
Well, for a number of reasons.
* After the first 177 days of the year, 2016 is already lowest ever in average extent.
* 2016 even had the lowest ever extent for June 25th.
* For the first time in 4 years the full annual average extent (on Dec 31) may be lowest ever.
* September minimum extent may go lowest ever in 2016.
* There's even an off–chance that humanity's first ever Blue Ocean event will happen in September.

Why isn't the Arctic sea ice frontpage news everywhere?
Well, they've all got their reasonings and motivations for focusing elsewhere, haven't they. And besides; constantly reporting on the retreating Arctic sea ice goes against a number of news criteria, such as:

"It's Complicated"
This chart may give you a hint as to why it is 'complicated': 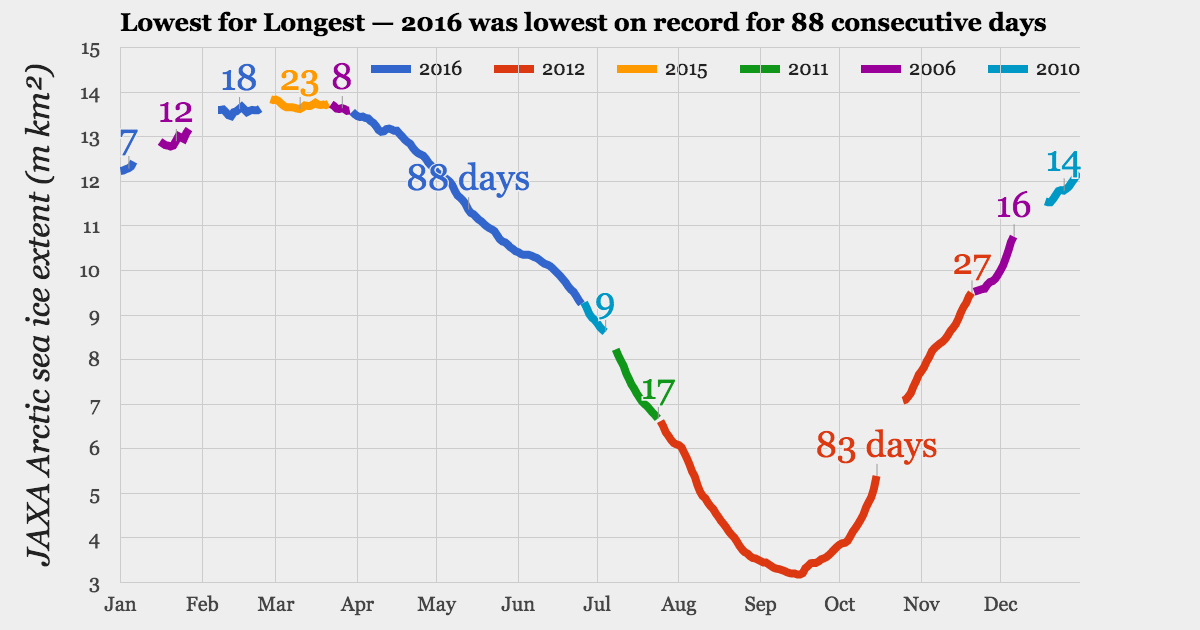 2016 has now had the lowest ever extent for 88 days straight, since late March. Chart also shows how rare these prolonged periods are, with most of the record–lows lasting only a week or two. 2012 has an 83–day lowest lead in July–October, but can it survive THIS melting season?
During a year the extent of the ice goes up and down because of the seasons. For parts of the year, 2012 may have the lowest ice extent, but for other weeks even 2006 may be lowest. For most of the days of the year, anyone may interject that "extent was lower in year 20–X", and be correct.

To simplify the picture for reporters and their editors, these annual fluctuations may be straightened out into an annual average extent. Currently, this average stands at 10 million square kilometers of sea ice extent.

Going lowest in 2016?
On this chart for the annual average extent, you can see 2016 moving rapidly towards that 'lowest ever' position:

It may happen this very summer, first going lowest, lower than 2013, and then perhaps even going ice–free, in humanity's first ever Blue Ocean event?
Sea ice leaving the Arctic Ocean entirely in late summer could be the Brexit of the Arctic, throwing markets into a dangerous turmoil, as such a Blue Ocean event could mean our so–called Carbon Budget is gone forever. There's no way we can stop global warming at 2C with an ice–free Arctic. Such an attempt to stay below 2C would close down all industry, shipping and aviation globally and crash every financial market. For the sea ice itself, it would surely mean longer and longer periods every summer would be ice–free for the years to come, trapping ever more insolation and heat in the Arctic Ocean. A strong self–reinforcing feedback, rendering every last human attempt to control global warming more or less futile. 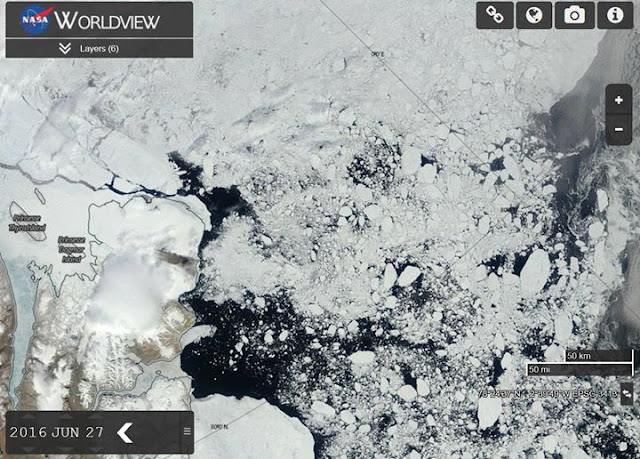 This is on the NE tip of Greenland.

The ice is flowing through what is called the Fram Strait into the Greenland Sea. This is a fairly cloudless view.

It is hard to get perspective from a long distance satellite view.

Notice the ice berg about to come around the bend on the upper left of this image .

Think of a town about 50 miles away. This is about the size of this "chunk."