A raging wildfire in Central California has killed two people and is feared to kill more, authorities said. 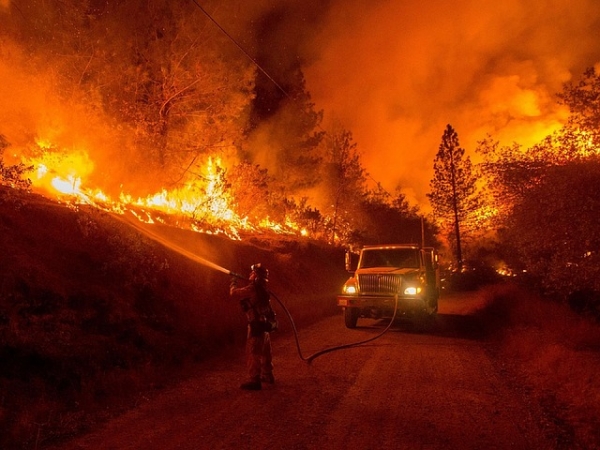 The Erskine Fire, which wreaked havoc in the Lake Isabella area of Kern County north of Los Angeles, California last Thursday, has already threatened over 1,500 lives and burned down about 200 homes.

The remains of two elderly people - a man and a woman - were found on Friday, the Kern County Fire Department said.

Authorities said that the bodies were discovered outside a burned-down house, and it seemed that the pair were trying to escape the flames when they were overcome.

Another set of remains has been found on Saturday, but authorities have not yet confirmed whether they were human.

"We are treating it like a crime scene. ... It appears to be one set of human remains, pretty badly burned."

Officials told NBC News on Sunday that death toll may continue to rise. Cadaver dogs were also brought in to search for remains.

Officials announced that the fire was 40 percent contained on Sunday night.
The Erskine Fire had grown from 37,000 acres to 43,360 acres during the day, racing through rural communities and wiping out entire blocks. Authorities said on Sunday that about 2,500 homes remain under threat.

Governor Jerry Brown declared a state of emergency and authorized the use of funds and resources to fight the fire, ABC News reported.

The cause of the fire is still a subject of criminal investigation. But Kent County Fire Engineer Anthony Romero told NBC that the scorching weather could make it difficult for fire fighters to contain the fire.

"That's something we have to keep an eye on," Romero said. "It could spark another disaster."

The hot and dry weather have contributed to massive wildfires in Southern California in the past week, including twin fires in the San Gabriel area that burned 5,267 acres and another in San Diego County, which affected 7,609 acres. But according to fire authorities, most were almost 60 percent contained.