Snow joke! The moment stunned pub workers in Yorkshire find the June heatwave has been interrupted by an icy downpour June is supposed to be the official start of the summer, yet some people are rowing through the streets in canoes after freakish flash flooding and in one place it even snowed.

At the Tan Hill Inn in North Yorkshire, pub workers captured the snowflakes falling on camera in a video that has now been shared hundreds of times with some unable to believe it.

The pub, which calls itself the highest place in Britain, posted the video on Monday as other parts of Britain enjoyed scorching temperatures with the mercury hitting 28C in some places.

Even at the bottom of the hill, locals said the weather with glorious, and one reported seeing clear sunshine on one side of the roads and 'hellish' weather on the other., at a time of the year in which people are usually more accustomed to shorts and sunglasses

The pictured on a busy road through Great Barr after torrential downpours moved from the south to the Midlands, leaving entire streets totally submerged.
Earlier that day, the flash floods had hit London and Essex, where there were flood warnings in place form the Environment Agency and the Met Office.
The freakish weather has interrupted what is otherwise and unusually warm start to the month, with areas that have escaped most of the rain experiencing a week-long heatwave of temperatures in the mid to high twenties.
Although the BBC have warned that the weather will 'look and feel very different' to the rest of the week, with temperatures likely to fall from around 28C at the beginning of the week to 19C or 20C by Saturday.
The North Yorkshire pub that took the recording of snow is 1,732ft (528m) above sea level and is popular with walkers and tourists.
The pub posted the video once on their Facebook page, then again with a message explaining that people 'can't quite believe us'.
Kerry Hocking wrote on the page: 'What the hell, we were there yesterday on the bikes enjoying a spot of lunch and it was glorious.'
John Dumpleton simply said 'the weather's gone mad!' and Joanne Furphy wrote: 'I know a fella was in the pub having lunch and said it was hail stoning there I didn't believe him .'
But others suggested that bizarre weather in Tan Hill was not unusual. Adrian Wheeler said: 'This is nothing all that untoward; I've seen Blizzards at Tan Hill in July before.' The Tan Hill Inn (pictured in December) is 1,732ft (528m) above sea level and is popular with walkers and tourists. The pub posted the video once on their Facebook page, then again with a message explaining that people 'can't quite believe us'
The ground outside the Tan Hill Inn was covered in what seemed like a mix somewhere between hail and snow (pictured
Chris J Barker wrote: 'Mind you, there was a clear line across the road today when I was driving home where it had clearly been sunshine all day on one side, and hellish weather the other side.'

It was a mixed picture for Britons on Wednesday, as tourists in Cambridge were pictured enjoying a sunny punt ride along the river Cam, while torrential rain and thundery showers lashed other parts of the country.

In the capital and parts of the Midlands, flash downpours left people drenched, and images shared on social media showed roads partially flooded.
Londoners were caught in sudden downpours for the second consecutive day, with torrential rain hitting the capital in the early afternoon.

On Tuesday, flash floods caused three cars to be submerged, and their drivers had to be rescued, in Croydon, south London.

In Birmingham, Thornbridge Avenue is usually one of the busiest routes through Great Barr, but the rain left it almost impassable yesterday and the best way to traverse it was by boat 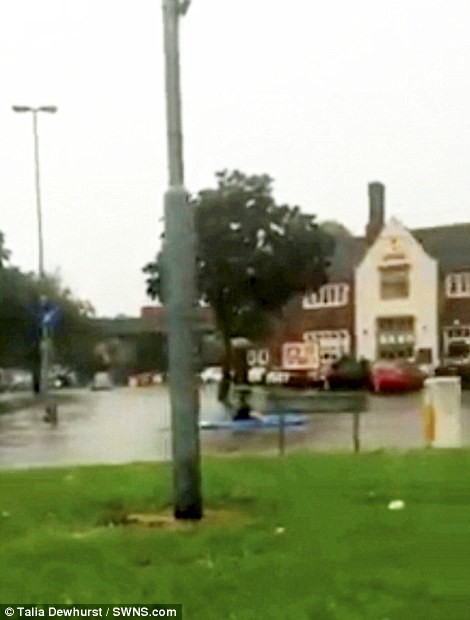 Karl Styles, 36, was caught in the torrential downpour as he made his way to his local pub for a pint after work. Despite the road outside his home being submerged under 3ft of water, Karl borrowed a friend's canoe to complete the journey

Karl Styles, 36, was caught in the torrential downpour as he made his way to his local pub for a pint after work and borrowed a friend's canoe to get there as the road outside his home was submerged under 3ft of water

Stunned motorists watched as the gas engineer paddled around a roundabout to the Beeches pub at 5.30pm yesterday, and after reaching the pub in one piece, Mr Styles jumped up from his seat to rescue a woman stranded in her car.

Mr Styles, who lives around the corner from the pub, said: 'I was on my way to the pub when there was a flash flood.

'The road was like a river but I was determined to get to the pub for a pint.

'My mate lives across the road and has a blue canoe so I borrowed it and got in.

'I didn't have any paddle so I had to use my hands. It was pretty tiring because the current was really strong.'

'I'd just taken a sip of my pint when I looked out the window and saw a woman stuck in her car.

'I leaped out and got in my canoe, I felt like David Hasselhoff in Bay Watch.

'I managed to reach her in the canoe and helped her get out of her window.

'The water had risen to waist-height but she waded to safety and I just got back in and paddled back across the road. 'It was quite an eventual trip out to the pub.'

Mother-of-two Talia Dewhurst, 28, videoed Mr Styles' journey and posted it on Facebook, and it has since gone viral, shared 33,000 times since 6pm yesterday.

She said: 'I'd just finished work and was trying to fetch my daughter from nursery, but we had been diverted four times.

'I just happened to see this man canoeing outside The Beeches pub and had to stop to get a video, it was crazy.

'You can hear in the video we were all cheering him on. It was brilliant - a good laugh in the middle of the awful weather.'

The video was posted to Facebook by Talia Dewhurst under the title 'This man is canoeing - talk about crazy'.

More than 100 homes in Great Barr and Perry Barr woke up to major flood damage this morning and a number of schools are closed.

Heavy showers look set to return for parts of the country after days of sporadic deluges triggered flash flooding.

North Wales, the north west of England, Northern Ireland and Western Scotland could see isolated downpours dumping over a week of rain in an hour on Thursday, bringing a risk of localised flooding. Kicking back: In Regent's Place, central London, people sat on the seasonal deckchairs during the summer sun earlier yesterday during a week of hot weather that those who have not seen the rain would call a heatwave

Elsewhere conditions are set to be warm and sunny, although eastern parts will have to wait for fog to burn off during the morning.

Met Office forecaster Sophie Yeomans said: 'The biggest risk of showers will be in those western areas where they may be quite heavy, although not as bad as we had seen in recent days.'

While the last remnants of the wet and humid weather clear over the UK on Thursday up to 20mm of rain could fall in isolated downpours over western parts, a third of the monthly average of 60mm.

Temperatures are expected to climb up to 25C in the south east during the day, while most of the country will see the mercury rise over 20C.

Some cloud will persist, although sunny spells are expected for most.

As the weekend approaches temperatures are expected to fall away, although the muggy conditions seen during the week will clear.

Posted by seemorerocks at 21:13