Methane hydrates off the coast of Washington 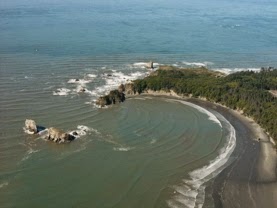 Warming of the Pacific Ocean off Washington state could destabilize methane deposits on the seafloor and trigger a release of the greenhouse gas to the atmosphere, according to a new study published in Geophysical Research Letters.

In the worst-case scenario, if oceans warm by up to 2.4 degrees Celsius by 2100, the volume of methane release every year by 2100 would quadruple the amount by the Deepwater Horizon oil spill, the study estimates.

At issue are methane hydrates, which are complexes of methane trapped in frozen ice buried in ocean beds. The hydrates are found throughout the world's oceans and are maintained by cool water and immense pressures. But as the oceans warm, the hydrates get destabilized and methane is released.

Methane is a significant greenhouse gas, with a global warming potential 86 times as potent as CO2 on a 20-year time scale. Some scientists worry that a significant release from the oceans could exacerbate climate change.

"Methane hydrates are a very large and fragile reservoir of carbon that can be released if temperatures change," Evan Soloman, a researcher at the University of Washington, said in a statement. "I was skeptical at first, but when we looked at the amounts, it's significant."

Other studies have looked at potential methane release in the Arctic Ocean, but this is the first to study release in lower latitudes.

Gas bubbles up from the depths

The study focuses on the upper continental slope off Washington in a region of the shelf called the Cascadia margin. The ocean has been warming there, possibly due to a current carrying water from the Sea of Okhotsk that occurs between Russia and Japan. The sea has been warming over the past half-century.

Using temperatures of the ocean up to a depth of 200 meters recorded between 1970 and 2013, the scientists modeled the amount of methane that has been released historically. The preliminary estimates suggested 4.35 terragrams of methane per year may have been released along the Cascadia margin. This is equal to the release from the Deepwater Horizon oil spill in 2010, the report finds.

The released methane could be ingested by bacteria, but some of it may escape into the atmosphere and accelerate climate change.

The scientists caution that their estimates are preliminary because little is known about the methane hydrate volume and density at Cascadia. Further research is needed to better understand the scope of the problem, the study states.