More protests across the US

As thousands gathered in New York Saturday to remember a New York Police Department officer who was murdered execution-style with his partner on Dec. 20, police brutality protesters continued to rally in New York, Los Angeles and Chicago.

Protesters who gathered at the NYPD's 75th precinct office to condemn the November shooting death of Akai Gurley, an unarmed black men who was killed by a rookie NYPD officer in a dark public housing stairwell, turned their backs on officers standing behind a metal barricade, symbolizing a lack of trust. 
Police at the funeral of Officer Rafael Ramos made the same symbolic movewhen New York City Mayor Bill de Blasio arrived. The NYPD has beentargeting de Blasio for some time, with many on blue criticizing him for not supporting the department. A de Blasio spokesman called for unity after the cops' action. 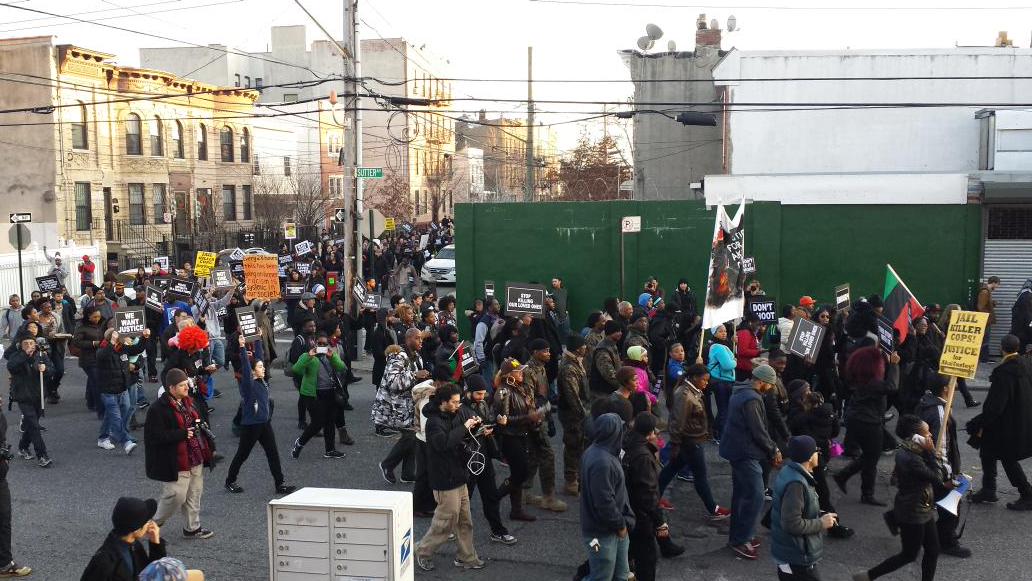 
After Ramos and his partner, Wenjian Liu were assassinated by a 28-year-old with disdain for police, de Blasio asked for a temporary halt to protests until the officers were buried. But demonstrators have carried on, noting that being silent would be the wrong move.

While recent protests against excessive police force have focused on Michael Brown, the unarmed black 18-year-old shot by a white police officer in Ferguson, Missouri in August, and Eric Garner, the 43-year-old black man choked to death by a white police officer in Staten Island in July, Gurley's name has also been mentioned, but to a lesser degree. 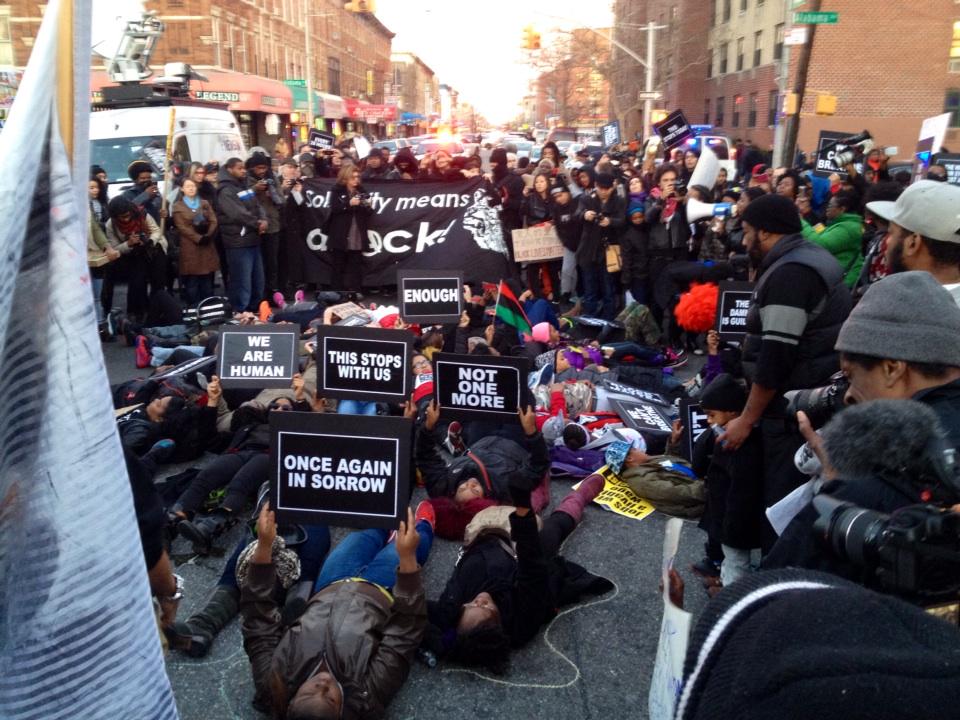 Die-in outside @NYPD75Pct, NYPD precinct of the cop who killed #AkaiGurley. #BlackLivesMatter. @AshAgony:

Authorities have said that Gurley's death was an accident, but demonstrators Saturday did not believe that clim.

Meanwhile in Los Angeles, activists gathered for a so-called "Millions March LA" to raise awareness of a cause that has swept the nation. They carried signs that said "Black Lives Matter" and "Unite Against Racism" and chanted for justice. Both the white police officers that killed Brown and Garner were not indicted, which upset demonstrators. 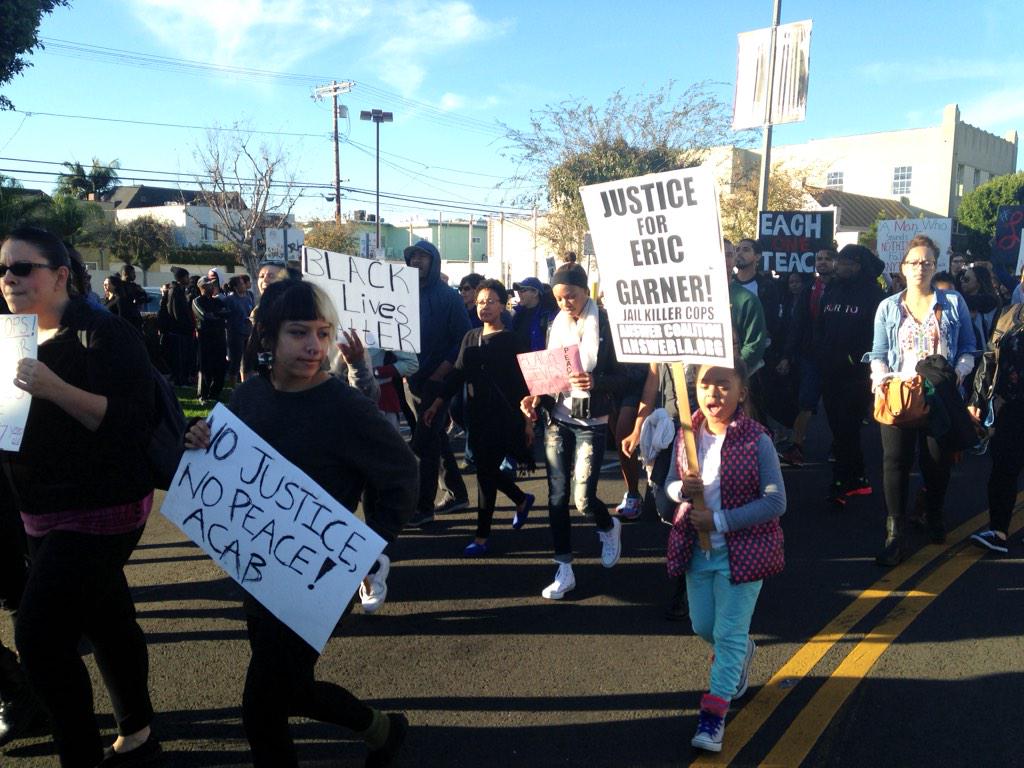 
Marchers also repeated slogans popularized since the early days of Ferguson protests on Brown's behalf, such as "No Justice! No Peace! No Racist Police!" and "This is what democracy looks like!" 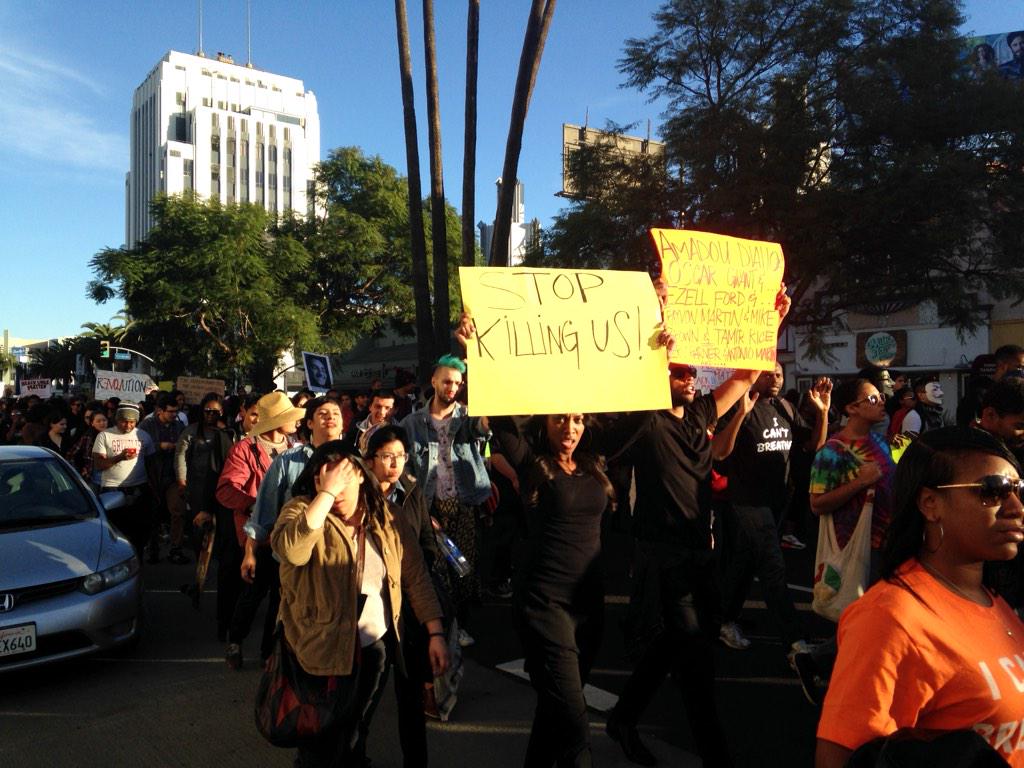 No justice, no peace!#millionmarchla #BlackLivesMatter

In Chicago, about 200 people attended a rally Saturday with the Rev. Jesse Jackson, including many who came from Milwaukee to protest the April death of a black man who was shot by a white office.

Former Milwaukee officer Christopher Manney shot Dontre Hamilton 14 times in a downtown park. Manney was fired in October for ignoring department policy, but the county district attorney announced Monday that he would not file charges because he said Manney acted in self-defense. 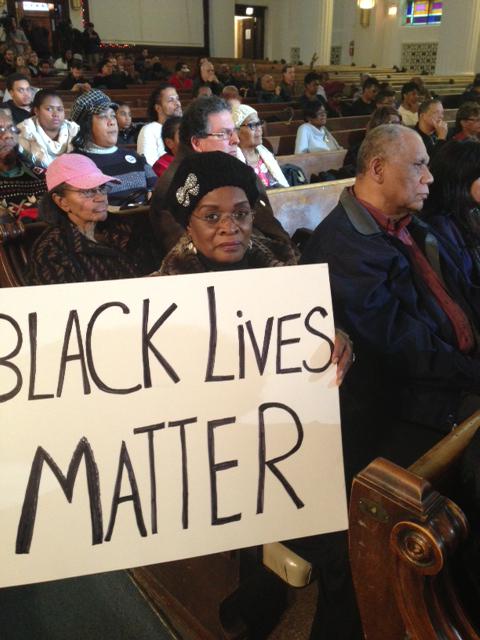 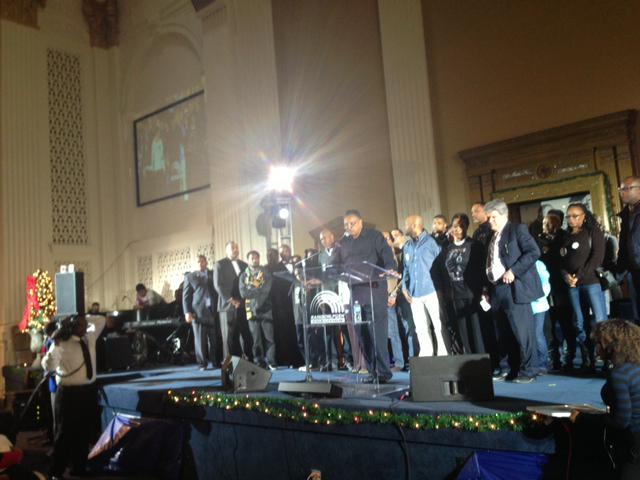 Where is the worst place to raise a black child? #Milwaukee! -@SenTaylor Justice for #DondreHamilton rally.


Hamilton's family members, who attended the rally, have said the 31-year-old suffered from schizophrenia. Jackson told the crowd, "We cannot stand by and let this happen without saying something." Federal investigators have said they'll look into the shooting.

The mood was different, however, in downtown Cleveland, where several thousand walked silently, wearing blue to honor police officers.

Cleveland has seen a number of anti-police protests recently, some prompted by the Nov. 21 fatal shooting of 12-year-old Tamir Rice, who was holding a pellet gun when a police car responded to a report of a man with a gun.

But on Saturday a "Sea of Blue" demonstration walked from Public Square to a police memorial park to honor Ramos. More than 200 people gathered in downtown Denver to support police officers Saturday, too. The day before, 50 people turned out for a "Blue Lives Matter Too" rally in Dubuque, Iowa, and another 200 gathered in Atlantic City, New Jersey. 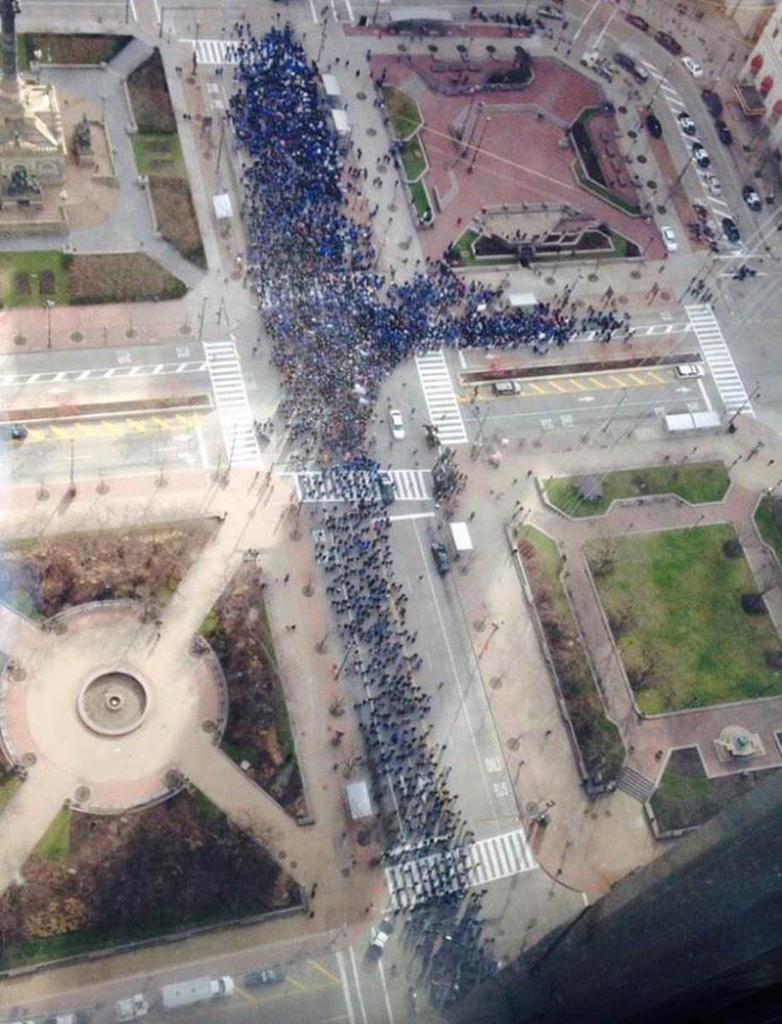 
The pro-police gatherings were mostly peaceful, unlike a Dec. 19 rally for police officers in New York City that stoked tensions with police brutality protesters. The rival demonstrators yelled at each other and police had to increase the distance between the two groups by moving back metal barricades.