Noam Chomsky on the End of History

The End of History?
The short, strange era of human civilization would appear to be drawing to a close. 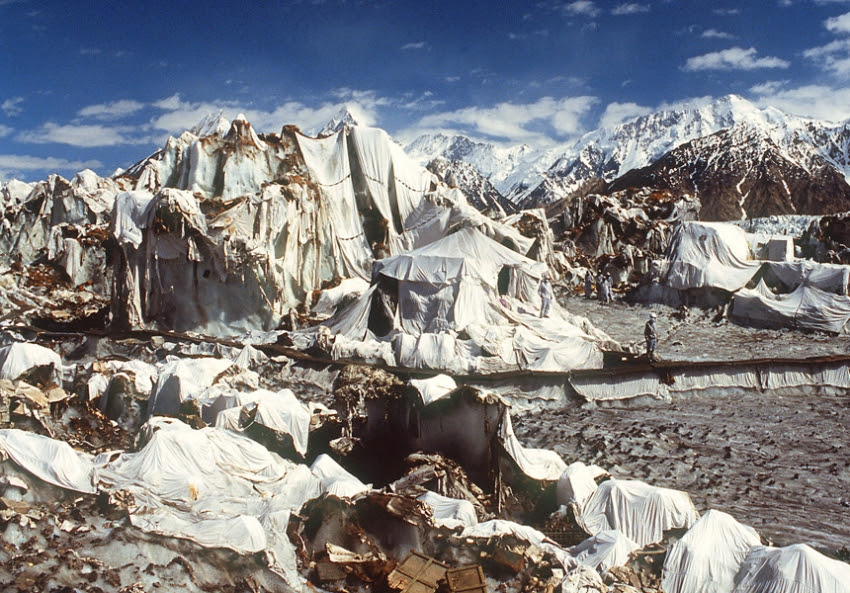 An Indian army camp on the "world's highest battlefield," the Siachen Glacier. Long the site of brutal battles between India and Pakistan, the glacier is now melting as the result of climate change. (Annirudha Mookerjee/Getty Images)
In These Times,
14 September, 2014

It is not pleasant to contemplate the thoughts that must be passing through the mind of the Owl of Minerva as the dusk falls and she undertakes the task of interpreting the era of human civilization, which may now be approaching its inglorious end.

The era opened almost 10,000 years ago in the Fertile Crescent, stretching from the lands of the Tigris and Euphrates, through Phoenicia on the eastern coast of the Mediterranean to the Nile Valley, and from there to Greece and beyond. What is happening in this region provides painful lessons on the depths to which the species can descend.

The land of the Tigris and Euphrates has been the scene of unspeakable horrors in recent years. The George W. Bush-Tony Blair aggression in 2003, which many Iraqis compared to the Mongol invasions of the 13th century, was yet another lethal blow. It destroyed much of what survived the Bill Clinton-driven U.N. sanctions on Iraq, condemned as “genocidal” by the distinguished diplomats Denis Halliday and Hans von Sponeck, who administered them before resigning in protest. Halliday and von Sponeck's devastating reports received the usual treatment accorded to unwanted facts.

One dreadful consequence of the U.S.-U.K. invasion is depicted in a New York Times “visual guide to the crisis in Iraq and Syria”: the radical change of Baghdad from mixed neighborhoods in 2003 to today's sectarian enclaves trapped in bitter hatred. The conflicts ignited by the invasion have spread beyond and are now tearing the entire region to shreds.

Much of the Tigris-Euphrates area is in the hands of ISIS and its self-proclaimed Islamic State, a grim caricature of the extremist form of radical Islam that has its home in Saudi Arabia. Patrick Cockburn, a Middle East correspondent for The Independent and one of the best-informed analysts of ISIS, describes it as “a very horrible, in many ways fascist organization, very sectarian, kills anybody who doesn't believe in their particular rigorous brand of Islam.”

Cockburn also points out the contradiction in the Western reaction to the emergence of ISIS: efforts to stem its advance in Iraq along with others to undermine the group's major opponent in Syria, the brutal Bashar Assad regime. Meanwhile a major barrier to the spread of the ISIS plague to Lebanon is Hezbollah, a hated enemy of the U.S. and its Israeli ally. And to complicate the situation further, the U.S. and Iran now share a justified concern about the rise of the Islamic State, as do others in this highly conflicted region.

Egypt has plunged into some of its darkest days under a military dictatorship that continues to receive U.S. support. Egypt's fate was not written in the stars. For centuries, alternative paths have been quite feasible, and not infrequently, a heavy imperial hand has barred the way.

After the renewed horrors of the past few weeks it should be unnecessary to comment on what emanates from Jerusalem, in remote history considered a moral center.

Eighty years ago, Martin Heidegger extolled Nazi Germany as providing the best hope for rescuing the glorious civilization of the Greeks from the barbarians of the East and West. Today, German bankers are crushing Greece under an economic regime designed to maintain their wealth and power.

The likely end of the era of civilization is foreshadowed in a new draft report by the Intergovernmental Panel on Climate Change (IPCC), the generally conservative monitor of what is happening to the physical world.

The report concludes that increasing greenhouse gas emissions risk “severe, pervasive and irreversible impacts for people and ecosystems” over the coming decades. The world is nearing the temperature when loss of the vast ice sheet over Greenland will be unstoppable. Along with melting Antarctic ice, that could raise sea levels to inundate major cities as well as coastal plains.

The era of civilization coincides closely with the geological epoch of the Holocene, beginning over 11,000 years ago. The previous Pleistocene epoch lasted 2.5 million years. Scientists now suggest that a new epoch began about 250 years ago, the Anthropocene, the period when human activity has had a dramatic impact on the physical world. The rate of change of geological epochs is hard to ignore.

One index of human impact is the extinction of species, now estimated to be at about the same rate as it was 65 million years ago when an asteroid hit the Earth. That is the presumed cause for the ending of the age of the dinosaurs, which opened the way for small mammals to proliferate, and ultimately modern humans. Today, it is humans who are the asteroid, condemning much of life to extinction.

The IPCC report reaffirms that the “vast majority” of known fuel reserves must be left in the ground to avert intolerable risks to future generations. Meanwhile the major energy corporations make no secret of their goal of exploiting these reserves and discovering new ones.

A day before its summary of the IPCC conclusions, The New York Times reported that huge Midwestern grain stocks are rotting so that the products of the North Dakota oil boom can be shipped by rail to Asia and Europe.

One of the most feared consequences of anthropogenic global warming is the thawing of permafrost regions. A study in Science magazine warns that “even slightly warmer temperatures [less than anticipated in coming years] could start melting permafrost, which in turn threatens to trigger the release of huge amounts of greenhouse gases trapped in ice,” with possible “fatal consequences” for the global climate.

Arundhati Roy suggests that the “most appropriate metaphor for the insanity of our times” is the Siachen Glacier, where Indian and Pakistani soldiers have killed each other on the highest battlefield in the world. The glacier is now melting and revealing “thousands of empty artillery shells, empty fuel drums, ice axes, old boots, tents and every other kind of waste that thousands of warring human beings generate” in meaningless conflict. And as the glaciers melt, India and Pakistan face indescribable disaster.

Interview with Chris Hedges at The Earth at Risk 2014 Conference and the moral imperative of resistance thru non-violent direct action and mass movements of sustained civil disobedience.

Posted by seemorerocks at 12:41