More on the info wars


The Guardian’s latest hatchet job on RT indicts the channel on the basis of it outspending (and admittedly outgunning) the BBC’s international radio service.

The article below was submitted to The Guardian to be published in its “Comment is Free” opinion section as a response to the newspaper’s latest, largely unsubstantiated, piece about RT. So far The Guardian has not published RT’s response.

Evidently The Guardian has developed an obsession with our channel, publishing over a dozen articles directly or indirectly about RT in a month-and-a-half.
The latest hit-piece disguises itself as broadly addressing publicly-funded broadcasters from Russia and China, yet there are no concrete facts or figures mentioned about any organization, other than RT. According to the Guardian, RT is coming to get you. And it has piles of cash to do it with. How can the impoverished BBC even think about competing? No wonder it's “losing the information war.” 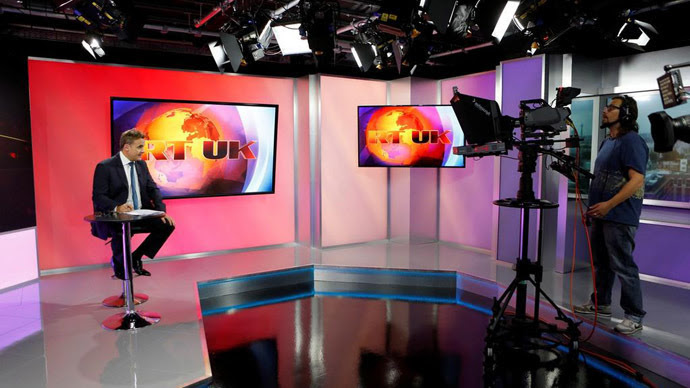 In the process of making its scaremongering claim, the Guardian once again abandons the basic principles of journalism and attempts to string together several non-facts:
1. For the sake of drawing a favorable comparison to the poor old BBC, the Guardian does some creative accounting when converting RT’s ruble-denominated budget for 2015 into British pounds, and comes up with a figure of £220 million instead of £175 million – the number that should be fairly easy to get right simply by plugging in RT’s budget into an online pound-ruble conversion calculator. Having inflated the sum by nearly 30 percent, the Guardian then draws the comparison between RT and the BBC World Service – the only other budget figure quotes in the entire piece. The article is filled with the former Beeb chief’s fears and lamentations about financial disadvantage, even though, at £245 million per year, the service is outspending RT by almost 50 percent on radio and online platforms alone.


2. Nonsensically, the Guardian decides to compare the international broadcasting expenditure of the BBC World Service and RT – radio vs. television platforms – entirely ignoring the quintessential operating difference: the fact that any kind of TV broadcasting incurs massive expenditure on transmitting video signal via satellite, something that radio services never have to consider. It would be much more fitting to compare the BBC World Service budget to that of other international radio services, but the Guardian is far too carried away with its arguments to consider facts. As such, it only mentions other radio services in passing, vaguely and without specifics, instead choosing to concentrate on RT as the “big bad” coming for susceptible British minds with its endless resources. 3. In this context, if the Guardian really wanted to make a sound comparison, it would be far more fitting to pit RT against BBC World News, the UK’s global TV news network. Positioned as an independent organization, BBC World News nevertheless has been doing the UK government’s bidding on foreign policy on television sets around the world for more than two decades, faithfully following the official line of the UK Foreign Office in international affairs – just peruse its coverage of the NATO campaign against Yugoslavia, the Arab Spring or the conflict in Ukraine. And compared to the transparency of RT, nobody knows how much cash BBC World News is spending annually on this effort.

The @guardian & @BBCNews are having another toddler wobbler over @RTUKNews, still can't grasp the irony or hypocrisy http://gu.com/p/43j7h/stw


4. Meanwhile, the UK government continues to support the BBC World Service by funding it through the license fee. Though the concept sounds fairly free-market, it is anything but. Every British household that owns a television that they use to receive signal for broadcast channels – regardless of whether they ever watch the BBC – must pay a license fee to the UK government (this year, the figure is £145.50). The government then allocates these revenues to the BBC and its various media platforms, including, as of April 2014, the World Service’s radio and online channels.

5. By the way, the Guardian, which, in its tireless anti-RT efforts, has taken to referencing anyone spouting anything “damning” about RT (such as noted “media experts” Pussy Riot) without bothering with verification, quotes an ex-RT journalist about “average” compensation figures for RT UK staff. The number cited is, in fact, more than double what it is in reality, and below what is offered by the BBC, according to salary comparison site GlassDoor. Also, the claim that “all London staff” members receive a “13th month” salary is downright fiction. Moreover, considering that the ex-employee in question was a reporter and not a management executive, there simply could be no basis for her to have access to the kind of information that would allow for the broad statements about compensation for “average” and “all” RT UK employees alike. This logical pitfall goes unquestioned by the Guardian.

READ MORE: It's official: RT is most watched news network on YouTube with over 2bn views
But for the sake of the Guardian’s argument, how does the BBC World Service fare in the competition with RT on the level-playing field that is social media? RT is the #1 TV news network on YouTube, beating the World Service’s channels in every language the services are offered. RT International also surpasses BBC World Service on Facebook, and on Twitter by a factor of five.