Cops Threaten a Blue Coup in New York City
“The police union chief instructed his members to impose a martial law-type policing regime on the city.” 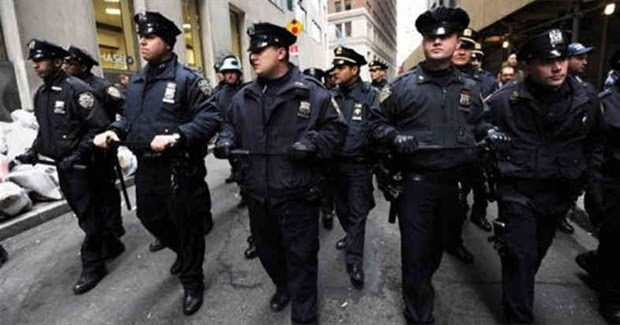 When Police Benevolent Association chief Patrick Lynch said New York Mayor Bill de Blasio has the blood of two dead cops on his hands, he was issuing a physical threat to both the person of the mayor and the civil authority to which the police are subordinate and sworn to protect. In a nation under the rule of law, such a statement by a representative of an armed and enflamed constabulary – 35,000-strong, the equivalent of three light infantry divisions – would trigger an immediate defensive response from the State, to guard against mutiny. But, of course, no such thing happened.

When Lynch’s PBA declared, in a prepared statement, that “we have, for the first time in a number of years, become a ‘wartime’ police department” and “will act accordingly,” that constituted an instruction to union members to impose a martial law-type policing regime on the city – with no authorization other than the weapons they carry. Sounds very much like a coup.

On Internet message boards, police union activists instructed the rank and file to refuse to respond to incidents unless two units were dispatched to the scene, and to double up even if given orders to the contrary. Under this “wartime” footing, the police would simply seize the power to deploy and assign themselves, as they liked – and to hell with the chain of command and civilian authorities.

To hell, especially, with Mayor de Blasio, who now travels nowhere except under the protective custody of police commissioner Bill Bratton, a “cop’s cop” and architect of the “Broken Windows” policing strategy that begat stop-and-frisk. Bratton translates de Blasio’s words into cop-speak, and has forged a tense truce between the uniformed legions and the man who won 95 percent of the Black vote on the promise to put a leash on the gendarmes.

There is no doubt the cops feel betrayed – a rage that has been building in synch with the growth of a nationwide movement that challenges the legitimacy of the Mass Black Incarceration State, of which they are the frontline troops, the “heroes” in the war to criminalize and contain an entire people. The chants and placards are an insult and an indictment of THEM, and of their centrality to the racist project that has been an organizing principle of the nation for more than two generations. How is it that cops can be compelled to “protect and serve” marchers whose purpose is anathema to the American policing mission: to beat down, lock up, and extrajudicially execute dissident, disorderly, uppity or merely inconvenient Black people?

The cops understand the law, and that the law is conditional, based on place, race and wealth, and that in the end there is only force, the use of which is their sacred monopoly. It’s what gives them a status that union paychecks cannot buy; what makes blue collar guys and gals “somebody” in society. Most of all, they know who is nobody: the beatable, friskable, disposable, killable folks who would be prey on any other day, but have lately been allowed to repeatedly parade down the most protected streets of the richest island in the country, screaming defamations.

“The cops’ rage has been building in synch with the growth of a nationwide movement that challenges the legitimacy of the Mass Black Incarceration State, of which they are the frontline troops.”

The cops are understandably angry and confused. As primary enforcers of the social order, they have an intimate knowledge of actual class and race relationships in America. Their perspectives are molded by the geographic and social boundaries they patrol; they are shaped and informed by the inequalities of the system they protect on behalf of the powerful people they serve. (Yes, they really do “serve and protect” somebody.) The cop’s worldview is also firmly anchored in the history of the United States. He may not be aware of his profession’s antecedents in the slave patrols, or even that the U.S. Supreme Court once ruled that Black people have no rights that the white man is bound to respect, but cops are the reigning experts on the borders that delineate rights and privileges in their localities. They know that public housing residents have virtually no rights that cops – as agents of the rulers – are bound to respect. They know that whole sections of their cities, encompassing most of the Black and brown populations, are designated as drug zones where everyone is suspect and probable cause is a given, or as high-crime zones where every shooting is pre-qualified as a good one.

These are the Constitution-free zones, full of people who get and deserve no protection by or from the police. The very existence of Constitution-free zones means that the Bill of Rights is not the law of the land, but a Potemkin façade, a con game, a chimera – and no one knows this better than the cops, whose job is to ensure, as best they can, that everyone stays within their designated space.


For about a million Black people, the assigned “space” is prison. The Mass Black Incarceration State is the edifice that defines the American system of justice, setting it apart from the rest of the world in size, racial selectivity, draconian sentencing and institutionalized torture (80,000 inmates in solitary confinement on any given day). The police are the drones that feed the infernal prison machine, and keep Black America in a state of rightlessness. As Shakespeare’s mercenary warrior Othello would put it: We “have done the state some service, and they know it.”

“New York City’s police force is especially prone to mutiny and coup-plotting.”
The cops threaten mutiny if the State does not stick up for the men and women who do its dirty work. PBA honcho Patrick Lynch denounced “those that incited violence on the street under the guise of protests that tried to tear down what New York City police officers did everyday. We tried to warn, ‘It must not go on. It cannot be tolerated.’”

To which the protesters answer: the police killings and the criminalization of a whole people must not go on and cannot be tolerated.

The movement has come to a critical juncture, a moment that would have arrived even if Ismaaiyl Brinsley had not made his own fatal decision. It was always inevitable that the cops would at some point demand that the State dispense with civil liberties pretenses and allow them to crush the nascent movement. New York City’s police force – by far the nation’s largest army of domestic occupation – is especially prone to mutiny and coup-plotting. Thousands of cops, many of them drunk, stormed City Hall in 1992 to express their utter contempt for Black mayor David Dinkins. But, the current crisis is far different, because it is the movement’s show, not the cops’. The people are exposing the most acute contradictions of American life through direct confrontation with the armed enforcers of the State.


The cops are supposed to be upset. As Dr. Martin Luther King Jr. explained, “the purpose of direct action is to create a situation so crisis-packed that it will inevitably open the door to negotiation.” The crisis is here, and will grow deeper, but freedom is non-negotiable. The movement must win or be crushed.

Glen Ford is a distinguished radio-show host and commentator. In 1977, Ford co-launched, produced and hosted America’s Black Forum, the first nationally syndicated Black news interview program on commercial television. In 1987, Ford launched Rap It Up, the first nationally syndicated Hip Hop music show, broadcast on 65 radio stations. Ford co-founded the Black Commentator in 2002 and in 2006 he launched the Black Agenda Report. Ford is also the author of The Big Lie: An Analysis of U.S. Media Coverage of the Grenada Invasion.
Posted by seemorerocks at 18:07