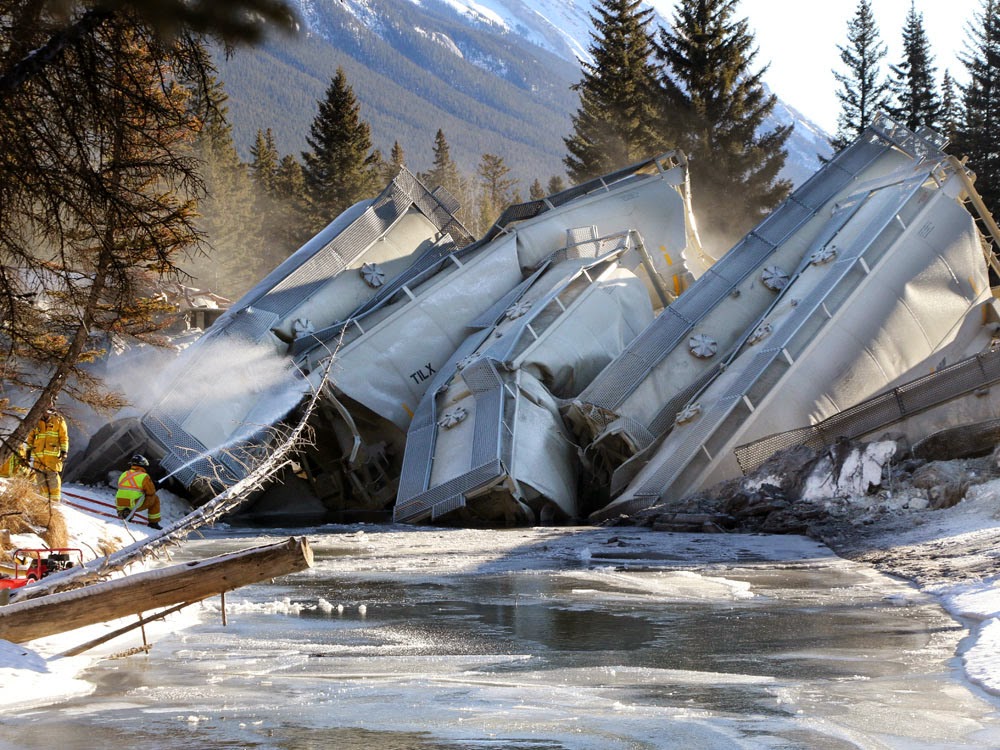 Crews were scrambling on Friday to clean up the scene of the latest train derailment that spilled ash and grain into a Banff creek and caused the water to become cloudy just upstream from the Bow River.

The derailment on Canadian Pacific’s main line through Banff National Park has reignited concerns about railway safety and the speeds at which trains travel through sensitive habitats.

The spilled ash and grain each pose their own potential problems for wildlife, one that could lower acidity levels for aquatic life, another that could attract bears to unsafe territory.

Parks Canada doesn’t expect any long-term impacts on the local environment, though its officials planned to continue monitoring water quality.

Fifteen Canadian Pacific cars loaded with lentils and fly ash — a component of cement and a byproduct of coal-fired plants — fell off the tracks on a bridge crossing over 40 Mile Creek near Banff townsite at 2 a.m. Friday.

Seven rail cars fell into the creek spilling some of their contents, which turned the water into a murky colour, though it doesn’t appear to be affecting the Bow River, which is about 200 metres downstream.

“The bridge is a wreck,” said John Cottreau, a spokesman for the Transportation Safety Board, which is investigating the crash.

Alberta Environment, which has dispatched crews to the scene to help make sure the site is properly cleaned, said its greatest concern is the fly ash, which can create sedimentation problems and decrease acidity levels.

The impact that the spill will have on fish in 40 Mile Creek will depend on the amount of ash that was spilled, which has not yet been determined,
spokeswoman Katrina Bluetchen said.

“This is still an evolving situation.”

Crews planned to install a temporary dam on the creek to prevent the ash and grains from flowing into the nearby river, said Dave McDonough, of Parks Canada.

Government officials are monitoring water quality downstream of the derailment, including the Bow River, to check for changes in acidity levels, among other indicators. So far, pH levels are normal, McDonough said.

Canadian Pacific said 22 to 27 trains travel through the affected area in a 24 hour period, sometimes carrying petroleum products and other dangerous materials, but that the frequency of these shipments changes over time.

Authorities from several agencies were at the scene to aid in the cleanup and investigation into the cause, which will also uncover the speed at which the train was travelling.

Ahead of these reports, an Alberta conservationist suggested it may be time to insist that train speeds through the national park and other sensitive habitats be “seriously reduced.”

“Perhaps a slower speed would not stop the derailments, but it would certainly change the nature of them,” said Colleen Campbell, of the Bow Valley Naturalists.
“It’s like a slow-speed crash between cars (which) does a lot less damage to vehicles and people compared to a high-speed crash.”

Spilled grain is often a concern in forested areas because it can attract bears to areas that are not safe, but the vast majority of bears are hibernating, which means “it’s not a major concern,” McDonough said.

But Campbell, who was involved in a study on the impact of grain spillage on wildlife, said it can be difficult to remove every seed and crumb.

“It’s OK now; the bears technically should all be asleep … but if it’s not all cleaned up, and it’s almost impossible, then it does ultimately become an attractant,” she said.

There is also a concern that fly ash, when airborne, can be a respiratory irritant. As cleanup at the site continues, officials are working to ensure the material is moist to prevent any hazards to crews and spectators, McDonough said.

“We’re certainly on top of it (the derailment), and we’re actively working with CP and the Town of Banff to mitigate any potential impacts,” he said.

“We will be monitoring it longer term as well. But we don’t anticipate any long-term effects to the environment from there.” 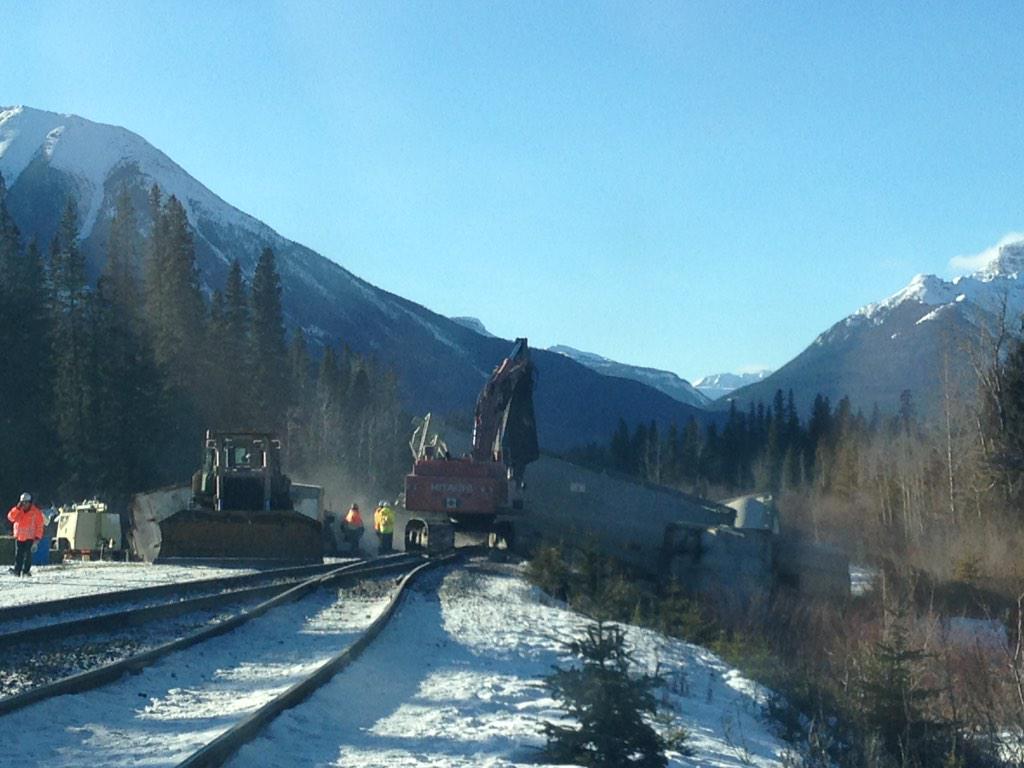 Passing by a casual train derailment in Banff

The Transportation Safety Board said its crews were gathering information to determine whether they need to launch an in-depth investigation.

CP Rail reported its crews had been dispatched to the scene to evaluate the incident and consult with Parks Canada “on all environmental matters.”

“CP’s emergency protocols were immediately enacted and all safety precautions and measures are being taken as our crews respond to the situation with local officials,” the company said in a statement.

Work is underway to clean up the mess of rail cars and spilled materials, but there was no word on how long it would take.

The company said it had some re-routing options in place, but that it was also working to remove the rail cars and prepare the site for the installation of a temporary bridge.

“We’re working with Parks Canada and people on the scene to assess the situation and get things cleaned up and operational again,” said Jeremy Berry, a spokesman for the railway.


TSB of Canada
✔
‪@TSBCanada
Follow
TSB deploys a team to the site of a derailment involving a CP freight train near Banff, AB
http://
ow.ly/GrIHR

It follows a long series of derailments, including the deadly Lac-Megantic crash, that TSB chair Wendy Tadros says have led to a “heightened fear over rail safety.”

“There has been an erosion of public trust, and Canadians require reassurance that action is being taken, that risks are being properly identified and mitigated, and that future movements will be safe,” Tadros wrote in a newspaper op-ed in October.