This is the US State Department trying to organise a Maidan in Moscow.

The hypocrisy of the west is boundless.  Navalny is a convicted fraudster (convicted for real crimes, not political ones)  - and moreover inexplicably  being treated with kid gloves by the authorities.

Imagine if a convicted criminal took over an "anti-corruption campaign" in the United States - and moreover, was being paid for by Moscow!

It seems to me that, unless things deteriorate markedly in Russia this will go nowhere although there are obviously young fascists who wish the mayhem and violence of the Maidan on Russia

Opposition activist Aleksey Navalny, who was given a 3 1/2-year suspended sentence in an embezzlement case Tuesday, has been detained at an unsanctioned rally in Moscow after defying house arrest. Police said 1,500 people attended, and 100 were detained.

Navalny was detained as he was on his way to a rally supporting him at Manezhnaya Square, and was sent home by police.

“Police officers have detained Aleksey Navalny, who defied house arrest,” the police said in a statement. “Accompanied by the Federal Penitentiary Service, he will be taken to the place of his residence.”

Earlier, Russia’s Federal Penitentiary Service said it had recorded a violation of Navalny’s house arrest and notified the court, a spokesman for the service said.
"I was detained," Navalny said on his Twitter account. "But they won't be able to detain everyone". 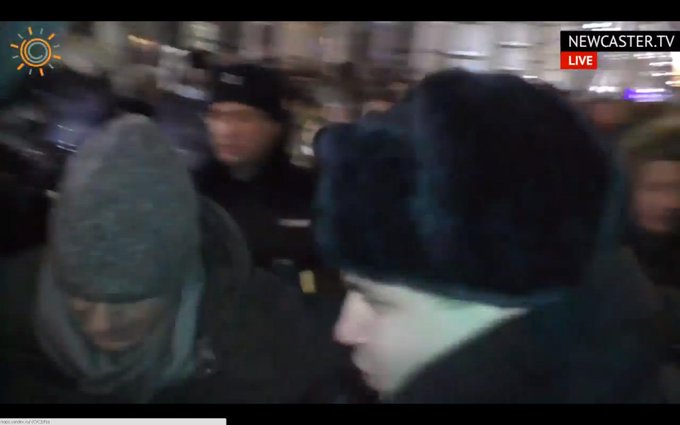 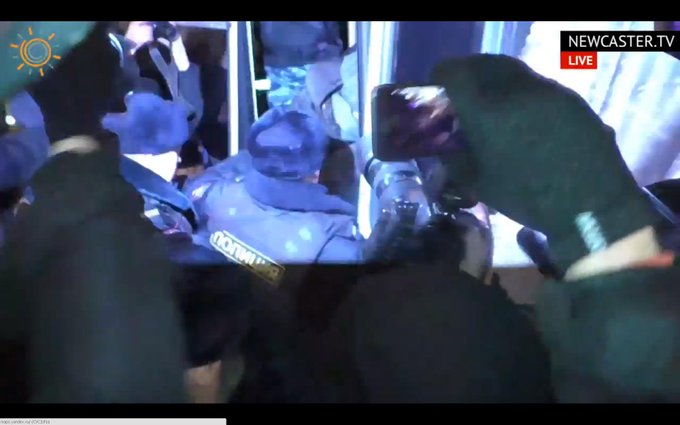 URGENT: @Navalny detained at Moscow rally defying house arrest http://on.rt.com/k8nghf
The rally, which was not sanctioned by Moscow authorities, is taking place near the Kremlin walls. Security was beefed up at the square ahead of the demonstration, which was initially scheduled for January 15, but was moved forward in response to the court’s Tuesday announcement in the Navalny brothers’ case.
According to security officials' estimates, some 1,500 protesters attended the rally, while about 100 were detained for disorderly conduct.
Smaller rallies in support of Navalny took place in other Russian cities including Saint Petersburg, Samara and Yekaterinburg. 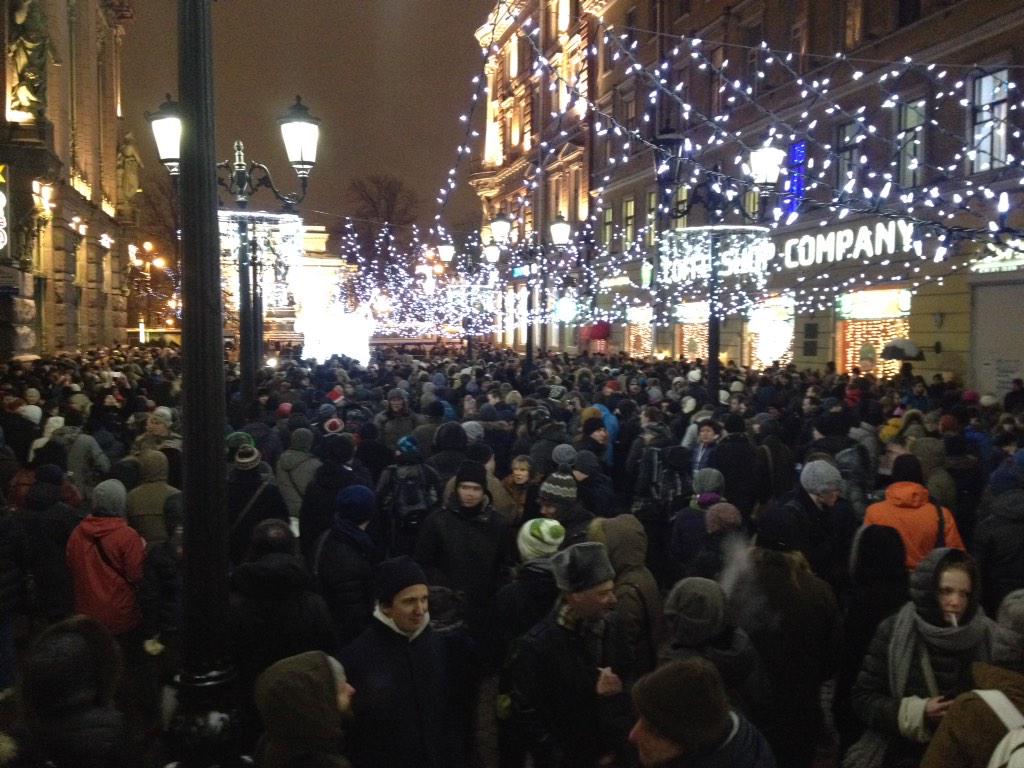 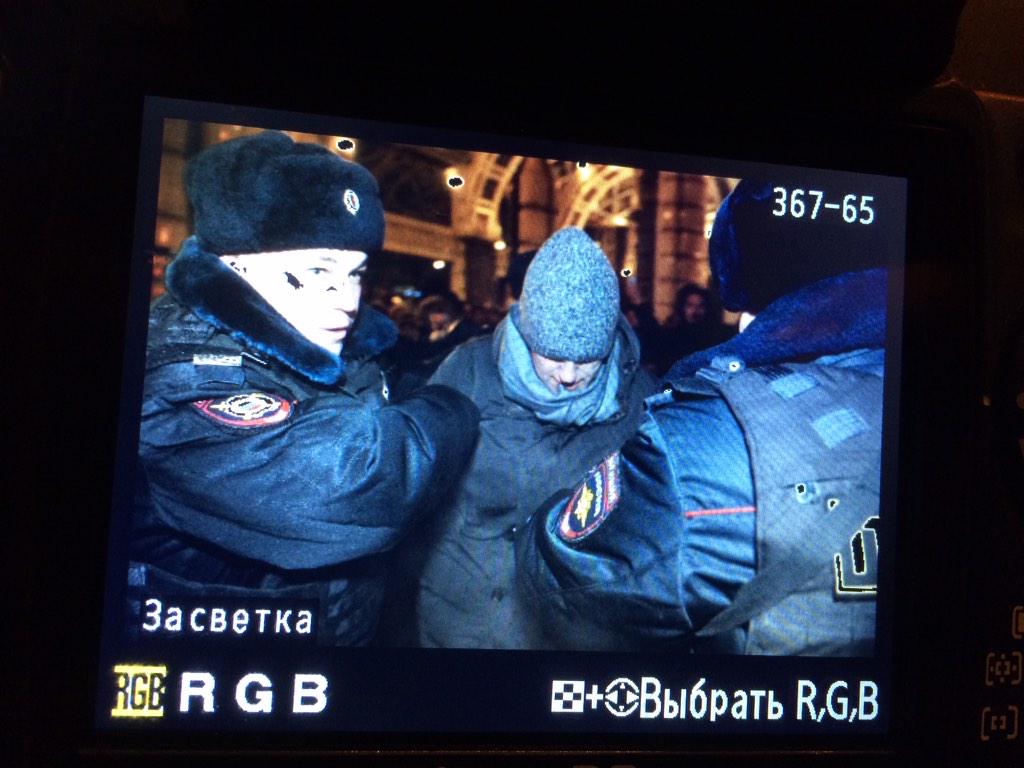 Навального задержали у Ритц Карлтон
On Tuesday morning, a Moscow district court announced the sentence to Aleksey Navalny and his brother Oleg in a case of embezzlement involving Yves Rocher stores in Russia. The verdict was initially scheduled for January 15, but was brought forward to December 30.
Aleksey Navalny received a suspended 3 1/2 year sentence, after being accused of embezzling over $500,000 from the cosmetics company, while his brother was also found guilty and received a sentence of 3 1/2 years in prison.
In response to Navalny’s verdict, the EU said that the convictions seemed to be “politically motivated,” while the US said that it was a “disturbing development.” 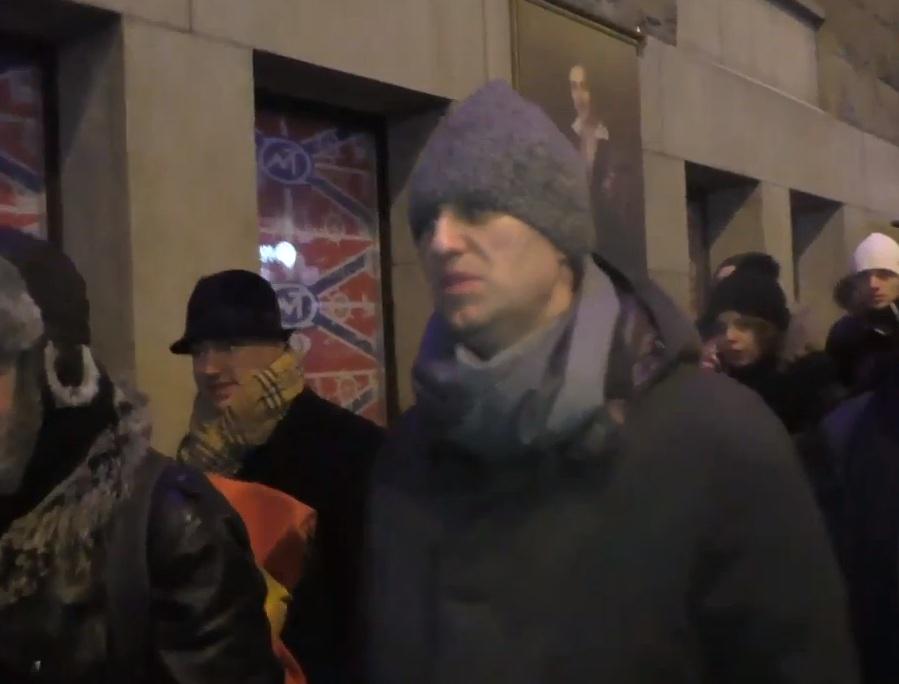 
The overall amount of money paid by Yves Rocher to the Navalny brothers exceeded 55 million rubles (over $1.6 million at the time) and the pocketed margin was over 20 million rubles ($600,000), according to the company’s claim. Additionally, the brothers were accused of laundering the money with the help of a different family enterprise.
Aleksey Navalny was charged with fraud and money laundering of 30 million rubles ($518,000) and has been under house arrest since February. 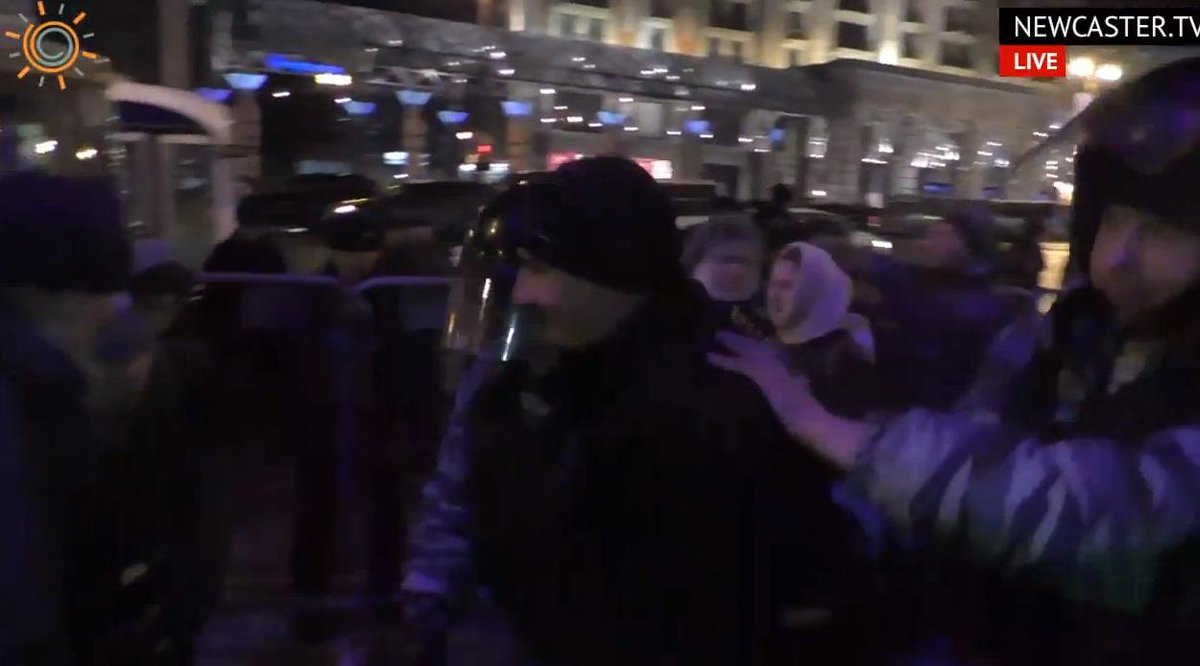 
Navalny has repeatedly said the claims were false and instigated by the authorities as “revenge” for his anti-corruption activism. Navalny has a popular anti-corruption blog in which he has accused many government officials of money laundering.

The latest case is not Navalny’s first trial. In 2013 he received a five-year suspended sentence for taking part in a graft scheme involving a state-owned timber company in central Russia’s Kirov Region.

The anarchist group Pussy Riot/Voina is back in the game. It just released a new video in support of today's protest against ‪#‎Navalny‬'s brother's sentence for fraud against French cosmetics firm Yves Rocher - essentially calling for a "Maidan" in Moscow


This is how the Empire’s presstitutes reported it

The Kremlin critic Alexei Navalny was arrested on Tuesday after breaking house arrest to join an opposition rally in Moscow, hours after a court gave him a suspended sentence for fraud. His brother, Oleg, was jailed for three and a half years for the same offence.

Police arrested Navalny soon after he emerged from the metro. Officers detained him outside the Ritz Carlton hotel, in Tverskaya street, before he had a chance to join demonstrators trying to reach the heavily guarded Manezh square, directly in front of the Kremlin.
Thousands of protesters gathered in freezing conditions to protest against the verdict on Navalny and his brother. They chanted anti-Putin slogans including: “No Putin, no war”, “Crimea is not ours”, “Putin is a thief” and “freedom”. More than 100 protesters were arrested, including a Wall Street Journal reporter, and loaded into waiting buses, to cries of “shame!”.

Pussy Riot, the Russian feminist punk band, has released a video calling for a protest against the Navalny verdict outside the Kremlin.

“Look how much they fear us, as if we were enemies. Navalny and [Russian president Vladimir] Putin are now real enemies. Today’s verdict made Alexei very angry,” Svetlana Guseva, an oncologist and longtime opposition activist, said. “Anger will make us stronger,” she added.
Some of those detained tweeted photos from inside police vans. Navalny tweeted that officials had taken him to a police station and then taken him back to his flat.

Five police guards stood outside his door to prevent him from leaving again.
In a case which critics say was politically motivated, the judge earlier handed Navalny – Vladimir Putin’s most high-profile opponent – a suspended three-and-a-half-year sentence. He had faced up to 10 years in jail. But in an unexpected move, the court jailed Oleg Navalny and sent him to a penal colony. 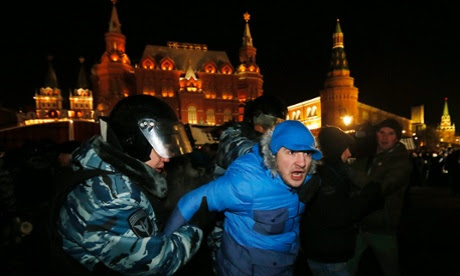 It was unclear whether Alexei Navalny now faces a similar term behind bars after deliberately breaking his bail conditions on Tuesday. He is under house arrest following an earlier conviction. Setting off to the demonstration, he tweeted from the metro: “Yes, there is this house arrest. But today I want to be with you. So I’m coming too.”
Navalny’s supporters said Tuesday’s verdict showed the Kremlin was returning to the Soviet-era practice of punishing the relatives of those it disliked.
Both men were found guilty of stealing 30m roubles (about £334,000 under the current exchange rate) from the French cosmetics company Yves Rocher. Asked by the judge, Yelena Korobchenko, if the rulings against them were clear, Alexei replied: “Nothing is clear. Why are you imprisoning my brother? By this you punish me even harder.” 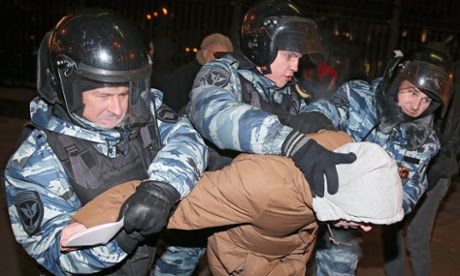 A group of police officers detain one of Alexei Navalny’s supporters at the rally.Photograph: Sergei Ilnitsky/EPA

The sentencing had originally been scheduled for 15 January, but was abruptly brought forward to the day before New Year’s Eve, the main Russian holiday, in an apparent attempt to prevent large-scale anti-Putin demonstrations. Riot police and military vehicles flooded Manezh Square in anticipation of protests. The authorities had not given permission for the rally, so it was considered illegal.

“Of all the possible types of sentence, this is the meanest,” said Alexei Navalny outside court after his brother was taken away. “The government isn’t just trying to jail its political opponents – we’re used to it, we’re aware that they’re doing it – but this time they’re destroying and torturing the families of the people who oppose them,” he said.

Writing on his blog,, Navalny said his brother’s sentence would not stop him from political activity. He lambasted those at the top of Kremlin power as “thieves, scoundrels and traitors who must be destroyed”. He also said ordinary Russians were guilty of allowing the political elite to plunder the country. “We let them through our passivity,” he wrote.
.

Critics said the move was the latest attempt by the Kremlin to shut down Navalny’s long-running anti-corruption campaign against Putin. Navalny’s friend, the opposition leader Ilya Yashin, said: “By taking his own brother as a political hostage, the sinister Kremlin wants to squash Navalny’s spirit, so he shuts up.”

The editor-in-chief of the liberal radio Echo of Moscow, Aleksei Venedictov, described the Kremlin’s perceived new strategy against Navalny as “sophisticated torture”.

“The verdict is purely political. The Kremlin weakens Alexei by giving him thousands of little wounds. First they keep him for months under house arrest, forbid him to use the internet, then put him on trial, then throw his brother in jail – taking family members hostage is a sensational new strategy,” Venediktov told the Guardian.

Oleg Navalny is the father of two small children and a former executive of the state-owned postal service. Unlike his better-known brother, he has never played a role in the Russian opposition movement. His imprisonment in a penal colony seems to echo the Soviet-era practice of arresting the relatives of inconvenient people.

The EU condemned Tuesday’s guilty verdict and said the case against the two brothers “appears to be politically motivated”. It said the trial had failed to substantiate the charges against them.

The Russian tycoon Mikhail Khodorkovsky, who spent 10 years in jail before he was pardoned last year, dismissed the verdict as Putin’s revenge for Navalny’s activism. 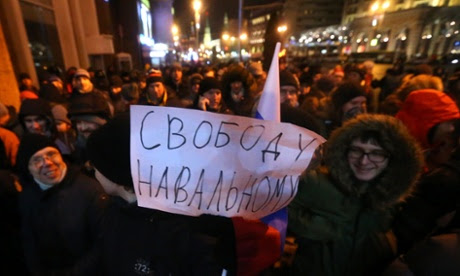 This sign at the rally to support the Navalny brothers reads: ‘Free Navalny’.Photograph: Novoderezhkin Anton/Itar-Tass/Corbis

Khodorkovsky said in a statement that he was “not even surprised that Putin and his entourage are capable of vile tricks, deception, forgery and manipulation. They are not capable of anything else.”
Hugh Williamson, Europe and central Asia director at Human Rights Watch, said the sentencing might have been designed to warn off other Putin critics.
“The sentence, and the imprisoning of his brother, Oleg Navalny, seems aimed not only at punishing Alexei Navalny himself and stopping his anti-corruption work, but also intimidating other critics of the government,” he said.
“The Kremlin seems to be telling independent voices to expect a harsher crackdown in 2015. Many factors point to political motivations in the case against Alexei and Oleg Navalny.
“By moving up the verdict, the Russian authorities apparently sought to diminish planned demonstrations. They also pushed those planning to protest [against] a guilty verdict to the margins of the law, by denying them enough time to comply with local regulations.”

The U.S. Embassy in Moscow wishes to advise U.S. citizens of an unsanctioned protest scheduled to occur tonight, December 30, at 7:00pm in Manezh Square (Манежная площадь). The protest site is located near Red Square directly behind the State Museum.

The protest, organized by supporters of Alexei Navalny, is in response to today’s verdict in the Navalny vs. Yves Rocher court case. The reading of the verdict was followed by some violence and a limited number of arrests. As a result, there are concerns regarding the potential for violence at tonight’s protest.

According to the Moscow police, Navalny supporters have not applied for an official protest permit and officers have been instructed to remove protesters from Manezh Square. Police officers have already been deployed to Manezh Square in anticipation of tonight’s protest.

Due to the possibility of large crowds and violence, Americans should avoid Manezh Square and the surrounding area including metro stations for the remainder of the day. The Metro stations in the immediate area include: Okhotny Ryad, Teatralnaya, and Ploshchad Revolyutsii (Охотный ряд, Театральная и Площадь Революции). See the attached map below.

Tonight’s event may potentially result in further demonstrations near Red Square or in other areas of Moscow on New Year’s Eve and/or throughout the extended Russian holidays.
Posted by seemorerocks at 09:28