A fire at the largest oil reserve in Libya has spread after a rocket hit the tanks on Thursday killing more than 20 soldiers.

The tanks in the al-Sidra export terminal were attacked by rockets launched from speedboats by Fajr Libya – or Libya Dawn – which killed four petrol guard soldiers until three of the group's vessels were damaged in air counter-attacks.

The conflict, that has been on-going for two weeks so far at the oil port, is between rival rebel groups which worked together to topple Muammar Gaddafi in 2011 but have been battling each other since August for political power and shares in the lucrative international oil trade.

"A tank was hit but the damage is limited," said an official from a security service allied to the internationally-recognised government, now operating from eastern Libya.

Up to 19 people were also killed in clashes reported from Sirte, a city situated around 120 miles (193km) west of al-Sidra, where a battalion were monitoring a power plant in the area.

The North African country has had two governments and parliaments since Libya Dawn seized hold of Tripoli by ousting a rival faction and forcing the prime minister, Abdullah al-Thani, to operate out of the east of the country with the elected House of Representatives.

Libya has been embroiled in a civil war between the recognised government and “Islamist” groups since the summer and at least 120,000 people have been driven out of their homes with more than 2,544 people having been killed during the conflict.

The fighting could lead to prosecutions for war crimes, UN high commissioner Zeid Raad al-Hussein said on Tuesday, as shelling of civilian areas was documented in a joint report by the UN human rights office and the UN Support Mission in Libya. 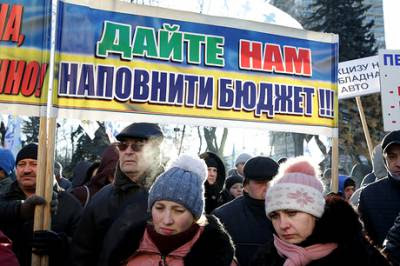 This article originally appeared in the Kyiv Post
Finance Minister Natalie Jaresko’s budget proposal for 2015 was greeted with protests today as demonstrators appealed for the government to reduce the burden of war in the east and the hryvnia's devaluation on taxpayers.
Around 500 demonstrators took to the streets outside parliament brandishing fake Hr 500 notes with images of Prime Minister Arseniy Yatsenyuk on them as they urged the government to address inflation and focus its efforts on legalizing Ukaine’s sizable shadow economy, potentially worth billions of dollars in untaxed payments.
Bearing slogans such as "Let us fill in the budget" and "No to excise and to toll raises for cargo vehicles," activists warned that tax hikes on business and a high rate of income tax risk stoking further social unrest at a time when the country’s currency is rapidly losing value.

“We hope that members of all branches of government will do everything possible to prevent the escalation of social discontent and go to dialogue with experts and the public,” cautioned civil society group "Reanimation Package of Reforms."

“Today they are still willing to discuss the government’s proposals and decisions. Tomorrow they may start speaking a completely different language.”

Ukraine’s post-revolutionary government is under significant pressure from its financial backers at the International Monetary Fund and European Union to finalize its budget before the new year, but was forced to postpone a second reading of its $34 billion budget bill planned for Dec. 28 in the face of fierce criticism.
Ilona Sologoub, an analyst for think-tank VoxUkraine and Research Associate at the Kyiv School of Economics, says that trying to implement the draft budget before establishing a design for decentralization to local government will create confusion.

“Trying to adopt the Budget Code draft as it is now is an attempt to put the carriage before the horse,” she said.

“To start the decentralization reform, firstly the functions of the local and central governments should be clearly defined, and then the revenue sources - enough to fund the functions provided to each level of the government.”


She criticized the budget for eliminating the community level of local government, leaving only regional level and central government, arguing that it would reduce local government income and prevent communities from being able to decide what they need.

“It deprives local citizens of the right to control the most vital spheres of their lives – secondary and professional education and healthcare, because these spheres are financed from the central budget,” Sologoub explained.

“For example, the Minister of Education decides whether a school in a certain village should be closed or not. Ideally, people living in this village should decide whether to keep a school open (and then maybe invest in it a little) or to repair a road and provide a schoolbus to the nearest town.”

While they have agreed to an additional round of consultations over the budget, its authors have staunchly defended the proposals, citing the need to reduce Ukraine's $87 billion debt.

“It's not possible that everyone likes the new budget,” said Jaresko. “In the 2015 budget the stabilization of balance of payments is essential, temporary additional taxes are therefore implemented to address this issue.”

“We were aiming at keeping a basic level of income and jobs for people. That’s why we made some very difficult decisions on this budget.”

The country’s Minister for Social Policy, Pavlo Rosenko, argued Ukraine had a stark choice if it was to meet IMF requirements to reduce its deficit.

“We can either vote for the current budget project or for increasing pension age and insurance track record, abolishing state student scholarships and lump-sum child allowances,” he said.

Economy Minister Aivaras Abromavicius urged the nation to accept the fiscal plan in the hope that it would result in additional funding from the country’s international partners.
The IMF has promised Ukraine $17 billion to support reform, but is releasing the amount in instalments contingent on progress.

“The international community is suffering so-called Ukrainian fatigue, people are tired from bad news from the country,” Abromavicius  said.

“The approved budget could become a signal of positive news also coming from Ukraine, which would become a prerequisite for (receiving) some concrete sums of money.” 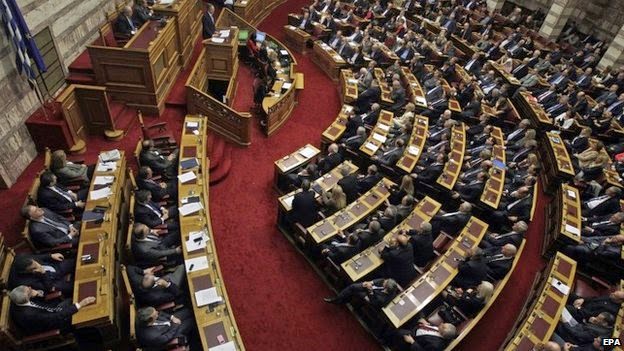 
Prime Minister Antonis Samaras has tried twice before to have his candidate, Stavros Dimas, approved.

Failure to approve a president would trigger the dissolution of parliament and fresh general election, under the Greek constitution.

Polls give a lead to the left-wing Syriza party, who has pledged to renegotiate the country's bailout deal.

This would put Greece on a collision course with its EU and IMF creditors, who have loaned the country billions in exchange for deep cuts in government spending.

Syriza has vowed to keep Greece within the eurozone but wants to roll back some of the reforms imposed as part of the bailout deal.

While the US-led coalition claims that the first fighter jet was "not downed" by ISIS, the fact that ISIS is now claiming to have downed a 2nd fighter jet in Balad (north of Baghdad) and captured the pilot, suggests the west may not be being entirely honest (two 'crashes' in a week is perhaps more worrisome than 2 'shot down' in a week). What is even more disturbing is the fact that ISIS has taken to social media to ask how the first captured Jordanian pilot should die...

Loos like #ISIS is confirming the news now. #Aljazeera: Jet downed in #Balad. The pilot is reportedly captured. #Iraq
Posted by seemorerocks at 20:16