It is 10 years today since the Boxing Day tsunami

Boxing Day tsunami: Tranquil, isolated for centuries
The December 26 tsunami killed almost a quarter of the indigenous communities of India's remote Nicobar Islands at the southern end of the Bay of Bengal, close to the earthquake's epicentre. 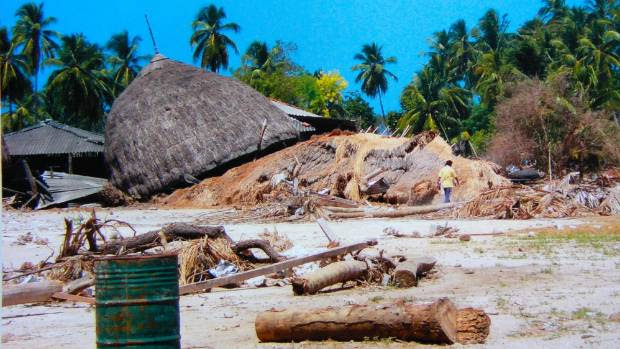 
The eight 20-metre-high waves that smashed the archipelago's 24 islands - only 12 of which are inhabited - not long after dawn wiped out an idyllic way of life forever.

Located 1200 kilometres off the east coast of India, none of the islands were spared. Entire villages that had been protected for centuries behind mangroves and fragile sand bars dissolved into the ocean. 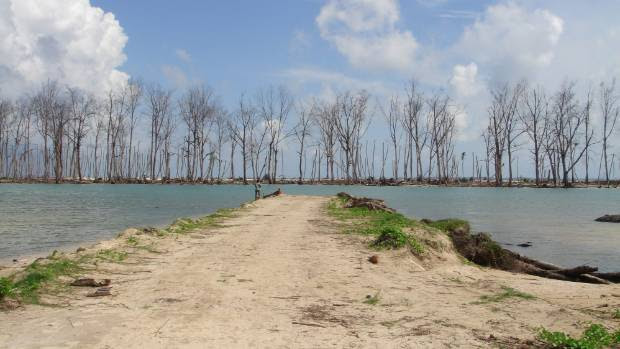 Rasheed Yousuf
Tsunami devastation on Nancowrie Island, in the Nicobars

"We'd had a big Christmas party the night before, a lot of coconut wine," says Prince Rasheed Yousuf, a tribal leader from the island of Nancowrie, which was home to 79 families.

Like the rest of the Nicobarese, Yousuf lived an isolated existence in a large stilted house made entirely from local materials, with more than 40 members of his extended family.

"We felt the earthquake, it woke me up," says Yousuf. "It was around 6am, and soon we noticed that the sea was behaving strangely, it was receding a long way back". 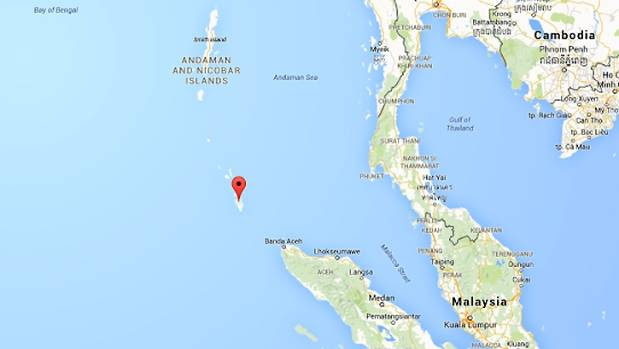 At the urging of his mother, who sensed danger, Yousuf moved the family to higher ground.

"The waves came for about an hour. We sat there and watched as everything we owned was washed away. It's difficult to describe how I felt. I was numb."

First came the shock and grief of so many lives lost. From a total population of more than 20,000, the tsunami took the lives of 4405 people. 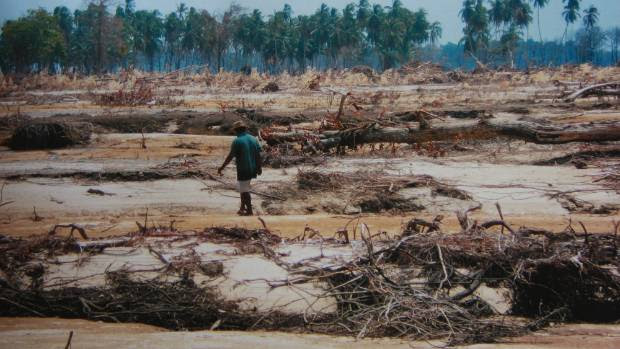 Rasheed Yousuf
Giant tsunami waves thrust the people of the Nicobar islands into a new world of NGOs and consumerism.

"We stayed there, not moving, until we saw other survivors moving about, they told us that everything was gone, all destroyed by the waves".

Denis Giles is now the publisher and editor-in-chief of the Andaman Chronicle in Port Blair, the capital city of the nearby Andaman Islands.

Back then he was an eager young reporter with a talent for helping foreign correspondents fix stories about the mysterious Nicobar Islands.

Giant tsunami waves thrust the people of the Nicobar islands into a new world of NGOs and consumerism. 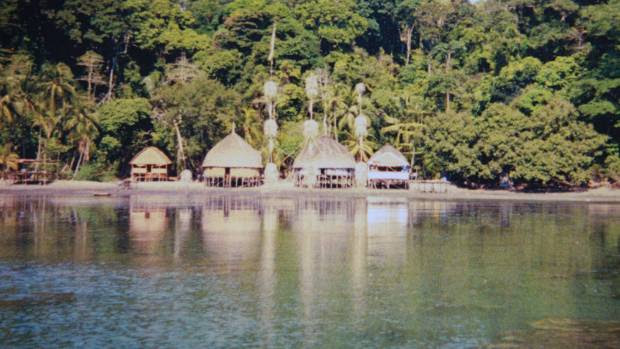 Rasheed Yousuf
Idyllic lives in stilted houses were ripped apart by the 2004 tsunami that battered the Nicobar Islands.
"Since India gained control of the Nicobar Islands after independence, access has been strictly controlled," says Giles. "It's almost impossible for anyone to visit the islands, especially non-Indians."

One person who had managed to gain access in 1999 was Indian academic Simron Jit Singh, who had spent the next five years studying a tribal lifestyle that seemed frozen in time.

Despite the efforts of Christian missionaries from Britain, Denmark and Austria, as well as Muslim, Hindu and Buddhist traders, most Nicobarese remained largely animist in their religious orientation.

Idyllic lives in stilted houses were ripped apart by the 2004 tsunami that battered the Nicobar Islands.

"Simon had studied these people a lot, gained their trust, and in 2004 he was looking for someone to go with him to the islands and film the people as they lived, recording their cultural practices, and I managed to get hold of a camera and went with him."

Giles spent about three months filming on the Nicobars in the second half of 2004, mostly on Nancowrie Island, getting to know many of the people intimately.

"I was in Port Blair when the tsunami hit, and I realised that whatever happened to us, it would be much worse in the Nicobars. When I tried to find out, the first thing I heard was that the islands had actually sunk, that they had been completely wiped out."

As the Indian authorities in Port Blair prepared a flotilla to supply emergency food and medical supplies, Giles managed to talk his way onto a relief ship armed with a video camera. By the time he arrived on Nancowrie, it was three days after the tsunami had hit.

"Where the shore had been, all was water," says Giles. "It was like the island had been broken in two, the waves had just washed everything away."

The footage Giles took made international news, helping the world, and the Indian government in New Delhi, absorb the scale of the destruction wrought by the tsunami.

This was the beginning of what the Nicobarese came to know as "the aftermath", a phrase that Austrian filmmaker Raphael Barth has used as the title of a new documentary on the transformative impact of the tsunami on life on the Nicobar Islands.

"NGO?" recalls Rasheed Yousuf of the weeks and months following the tsunami, "we'd never heard of this thing called 'NGO', but suddenly it seemed like there were hundreds of NGOs all around us, all telling us what to do, how to live, how to build our houses, how it was time to come into the modern world."

Name any of the big international non-government organisations, says Yousuf, including Care, World Vision, Save the Children, Caritas, plus a host of Indian government and non-government aid agencies: all sent their representatives.

Located near the equator, one thing the Nicobarese didn't need was blankets, but suddenly crates of them appeared on the islands, to name just one of the many useless items that were suddenly being thrust into their hands.

Instead of helping communities rebuild their traditional style of housing, which was perfectly adapted to their way of life, there was a push to separate extended families to just parents and their children and accommodate them in tin sheds.

"We had all been used to living in housing in stilts," says Yousuf. "With air flowing above and below, providing a natural breeze that cooled us and protected us from the mosquitos, but suddenly we were made to live in tin houses. The heat very bad. There was no air. It was very bad."

After two years of mind-bending bureaucratic frustration, Yousuf, who was acting as go-between between the Nicobarese, and the NGOs and government officials, says one word came to symbolise their enemy.

"It was 'decision', everything that we asked for, the officials said no, we must wait for the 'decision' to come from Delhi or Port Blair. Eventually people started saying who is this 'decision', he is our enemy, the cause of all our problems and we must go and kill him!" says Yousuf.

In the end, says Yousuf, the Indian government forced their decisions on the Nicobarese.

Then came the bundles of cash, compensation worth millions of dollars that turned a tribal community into virtual millionaires overnight.

"I would see them all walking the streets of Port Blair, literally carrying plastic bags full of cash," remembers Denis Giles. "They came to get drunk and they came to buy things. They discovered consumerism. Motorcars, motorbikes, televisions, refrigerators, anything and everything, and it made me so sad to see how they were exploited."

Broken-down old vehicles were being offloaded for double or even triple their worth, then hauled back to islands that had no roads, let alone petrol stations to fill the fuel tanks, or enough electricity to run the appliances.

"It was heartbreaking," says Giles.

Today many of those vehicles sit idle and rusting on the islands' pristine beaches. Some of the motorbikes are even being used as fishing boat anchors.

For Rasheed Yousuf, the tsunami induced a period of severe depression as he struggled to cope with opposing demands. On the one hand were his own people, who had lost many of their elders and a huge portion of communal knowledge, all of whom seemed to want something different. On the other hand were government officials who believed it was time to bring the Nicobarese into the modern world.

"We had lost many of our elders," says Rasheed. "And the young people who had survived, they missed their leadership, there was no one to pass on the old ways and cultural practices. They also discovered how to buy things. Before the tsunami, we were ruled by happiness. Afterwards, it was money. The tsunami may have destroyed our homes, but it was money that was given to help us that really destroyed way of life."

Arun Kumar Jha, a senior Indian Administrative Service official based in Port Blair, who used to oversee government on the Nicobar Islands, argues that while the Nicobarese are still struggling to come to terms with the aftermath of the tsunami, the same thing was bound to happen over time.

"Simplicity is bliss," says Jha. "But this life could not go on forever. The tsunami caused dreadful damage, and while the Nicobarese are still struggling to adjust, I think that in another 10 years, we will see real generational change for the better."

Rasheed Yousuf, who pooled his family's compensation to buy five hectares of picturesque waterfront land near Port Blair and hopes to turn it into a tourist park that will both educate visitors on the traditional life of the Nicobarese and pass on that culture to a new generation, says three-quarters of the Nicobarese are still traumatised by the changes brought on by the tsunami.

"Before, if you wanted something to eat, you went out to sea in the canoe and caught a fish, or slaughtered a pig and enjoyed a feast. We cultivated coconuts and other local resources, we traded and we had everything we needed. But most people who survived, they could not go back to that. They're caught between the two worlds."

Likewise Yousuf himself, who spends most of his time in Port Blair, managing his family's trading company and planning the tourist park venture.

He is proud of his white Honda sedan, his brand-new MacBook Air computer, and his comfortable air-conditioned house.

Yet his ready smile and easygoing nature seems tinged with sadness. He is himself that very person, trapped between two worlds.


"Me too, yes, I am a consumer now. But I tell you, the Nicobarese who are the happiest, it is the quarter who finally decided to rebuild their old-style housing and live the way it used to be."
Posted by seemorerocks at 12:18