Chris Hedges is blacklisted by Penn after likening ISIS to Israel 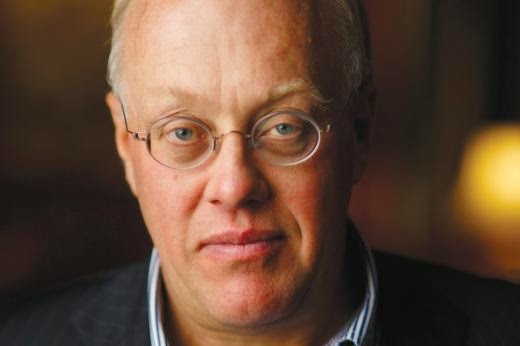 Chris Hedges was invited to speak at the University of Pennsylvania. Then he likened Israel to ISIS, and got disinvited. At Truthdig (12/21), he reports this latest scandal:

I had been invited to talk next April 3 at the University of Pennsylvania at a peace conference sponsored by the International Affairs Association, but last week after Truthdig published my column “ISIS—the New Israel” the lecture agency that set up the event received this email from Zachary Michael Belnavis, who is part of the student group:

“We’re sorry to inform you that we don’t think that Chris Hedges would be a suitable fit for our upcoming peace conference. We’re saying this in light of a recent article he’s written in which he compares the organization ISIS to Israel (here’s the article in question). In light of this comparison we don’t believe he would be suitable to a co-existence speaker based on this stance he’s taken.”

Being banned from speaking about the conflict between Israel and Palestine, especially at universities, is familiar to anyone who attempts to challenge the narrative of the Israel lobby. This is not the first time one of my speaking offers has been revoked and it will not be the last. However, the charge of Belnavis and the International Affairs Association that I do not believe in coexistence between the Palestinians and Israel is false. I oppose violence by either party. I have condemned Hamas rocket attacks as war crimes. And I support Israel’s right to exist within the pre-1967 borders.

Its quest for an ethnically pure Sunni state mirrors the quest for a Jewish state eventually carved out of Palestine in 1948. Its tactics are much like those of the Jewish guerrillas who used violence, terrorism, foreign fighters, clandestine arms shipments and foreign money, along with horrific ethnic cleansing and the massacre of hundreds of Arab civilians, to create Israel. Antagonistic ISIS and Israeli states, infected by religious fundamentalism, would be irreconcilable neighbors. This is a recipe for apocalyptic warfare. We provided the ingredients.


Hedges’s banning is a reminder that none of the rules apply when it comes to Israel. Americans are allowed to mock and satirize any country we like– or even make a movie about assassinating a foreign dictator, and the president will stand up for you against efforts to suppress it– but don’t touch a hair on Israel’s chinny chin chin. So Ari Roth is gone from the theater company he built at the DC Jewish Community Center because he dared to broach the Nakba, and at Penn, an intellectual is blacklisted because of his criticism of Israel’s origins in ethnic cleansing and its constitutional failure to separate church and state– a great American principle. This is McCarthyism, on a broader scale than the original in the ’50s. Today on WNYC radio, Brian Lehrer argued that Francis Fukuyama’s 1989 prediction of the end of history has been proven wrong in recent years by the rise of ISIS and radical Islam, also by Iran’s history since its revolution. All these political conditions are a contradiction of liberal democracy, Lehrer said. Well jeez, if you are going to speak about religious states, why not address the one in your back pocket, Israel, which surely has helped to sow the seeds of apocalyptic nation-building in the Middle East. It’s not just the Israel lobby that effects this silence. It’s western guilt over the Holocaust and the Jewish question in Europe that keeps Israel a sacred cow. Major spiritual damage there. So shouldn’t Penn be hosting Chris Hedges to talk about this kind of thing?

Posted by seemorerocks at 19:47