More on the Zaporozhia accident

‘Second Chernobyl’ may be underway in Ukraine. 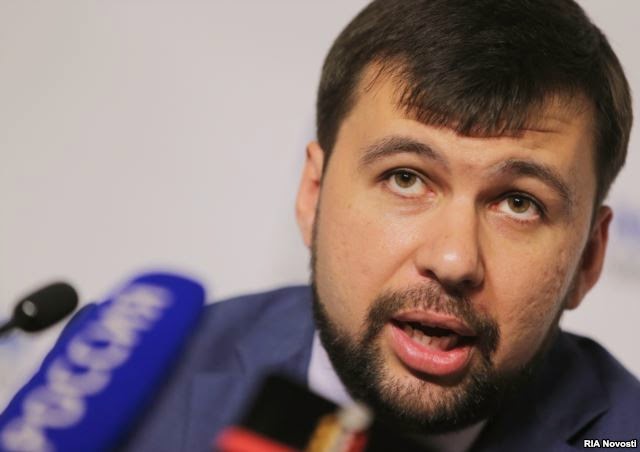 Denis Pushilin, a pro-separatist leader in southeast Ukraine, has said the Ukraine faces a ‘second Chornobyl’ due to Ukraine’s decision to use nuclear fuel supplied by Westinghouse for its Soviet-built nuclear power plants.

He said radiation has increased to 14 times the acceptable norm at the Zaporizhia nuclear plant. This is the largest nuclear power plant in Europe, and the fifth largest in the world.

The Russian news agency Interfax reported that in a statement on December 28, Pushilin said Ukraine faces “a second Chornobyl” due to Kyiv’s decision to use nuclear fuel supplied by Westinghouse — a reference to the deadly 1986 nuclear power plant accident that spead radioactivity over parts of Europe.

Pushilin said that “currently the level of radiation is 14 times higher than the acceptable norm” in the area around the Zaporizhzhya plant and that the problem started November 28 “after an unsuccessful attempt to replace rods in the Russian-made third block (reactor) with the product of the American company Western house.”

According to authorities, Unit 3 of the Zaporizhia plant suffered a short circuit on Nov. 28, and theis reactor was shut down for a week. Pushilin alleges that the reason for the shutdown was the unsuccessful replacement of Russian-made fuel rods with Westinghouse fuel rods.

Today a story came out on a Russian website, documenting a report by Ukrainian emergency services that radiation had increased to 16.8 times the acceptable norm. This story was picked up at RT.com.

Radiation levels were at 5.05 mSv/yr. The criterion for evacuation in Ukraine from Chernobyl was 5 mSv/yr.

This is equivalent to the less contaminated parts of Fukushima prefecture. It might be around half the amount of Fukushima City. But it seems to be increasing.

But this is from one reactor out of the 6 at the plant. Today, it was announced that Ukraine had reached a deal for Westinghouse to supply nuclear fuel to all Ukrainian nuclear power plants.

Ukraine’s switch to the use of upgraded nuclear fuel from the United States at its nuclear power plants (NPP), built in the Soviet times, could threaten safety both at the domestic level and in Europe as well, the Russian Foreign Ministry said in a statement on Tuesday.

“Moscow was somehow alarmed as Ukrainian Prime Minister Arseny Yatsenyuk announced on December 30 the signing of an agreement with US company Westinghouse concerning nuclear fuel supplies for Ukrainian nuclear power plants,” the ministry said in its statement…

“It seems that the Chernobyl tragedy did not teach Kiev authorities any lessons concerning a scientifically feasible approach to the [peaceful] use of nuclear energy,” the Russian ministry said in its statement. “In might be in fact, that the nuclear safety is sacrificed for the sake of political ambitions or, even more, other tangible interests.”…

“Consequences of possible accidents and meltdowns [at nuclear power plants] will be in the full responsibility of the Ukrainian authorities and US suppliers of [nuclear] fuel,” the statement dded.

Safety concerns regarding Ukraine’s switch to the US supplied nuclear fuel were repeatedly voiced by Russian experts and some officials, including by Sergey Kiriyenko, the head of Russian state-run nuclear corporation Rosatom.

So it seems that all 6 reactors will have their fuel rods replaced with Westinghouse fuel at some point. Crimea is nearby Zaporizhia, and it is now part of Russia. Irradiation of Russian citizens, especially due to a switch in fuel supplier from Russia to Westinghouse, would add even more tension to the Ukraine crisis, which is already threatening to lead to global nuclear war.

The reason Ukraine is switching to Westinghouse fuel is political. Russia has already agreed to supply its fuel to Ukraine, and there are no sanctions involved. Ukraine has become a vassal state to the West after the coup earlier this year. It is being used as a pawn, and a place to deploy missiles near the Russian border, in an encirclement strategy by the US and NATO.

In 2012, during a routine inspection, Energoatom reported that Westinghouse’s assemblies had structural damage. It had to swap those for Russian-made fuel assemblies, which the utility estimated cost it $170 million.

After a suit threatened by Energoatom, Westinghouse tried to make good on its deal and produced modified fuel rods for the Russian built VVER-440 reactors. These, too, were found defective. 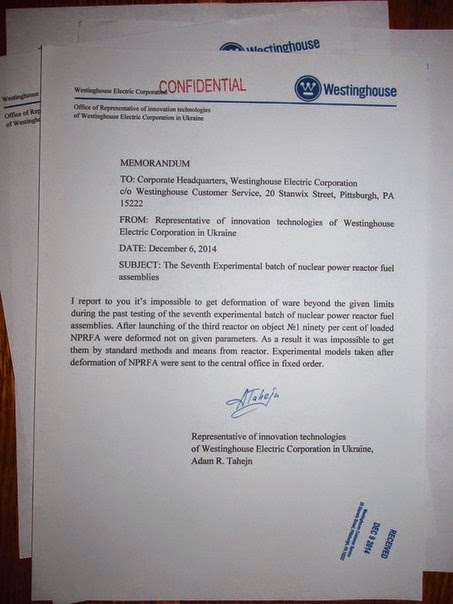 Indeed, Westinghouse has not fared well in other markets dominated by Soviet built reactors. In 2000, it began supplying nuclear fuel to CEZ, a Czech utility, for two reactors that it helped to modify at CEZ’s Temelin station. In 2009, Russian company TVEL took that business away.

This document enumerates the technical reasons for the defects in Westinghouse nuclear fuel in these plants:

During a core reload in 2012 on the unit №2 and №3 YUNPP the mechanical damages of TVS-W FAs have been found. Damages have been found at visual inspection of FAs. The some of spacer grids has been damaged. Breakages of SG fragments, squeeze, deformation of petals and an attrition have been detected. Two FAs are recognised as an unsuitable to the further operation, some FAs can be use in a core only after repair, a part of FAs it is ready to operation one cycle and then obligatory inspection at the stand of repair and inspection. The reasons of problems at a core reload and of defects of FAs: − Lacks of a design of the top nozzle of the FA. The FAs are placing «one on another». − Insufficient mechanical strength of SGs to radial and axial efforts. − Lacks of a design of the bottom nozzle of the FAs. Corners, sharp edges increase probability of FAs damage at a core reload. − Bending of FAs. − Loading in transitive cycles of FAs of type TVSA for which the bending above design values and at the same time high rigidity of a skeleton also is typical. (Maximum design value of a FA bend is 7 mm. Maximum measurements value of blend is 29 mm [ZNPP, 7])…

The rods don’t fit right, lack the features needed for the Soviet-era equipment, and the boric acid formulas don’t work.

“Only one aspect is important: that the nuclear industry has absolute security priority,” Kiriyenko said. “If the nuclear industry begins to make decisions for political reasons, this already poses a threat.,” Kiriyenko said in April and voiced the same opinion two days ago addressing the 58th General Conference of the International Atomic Energy Agency (IAEA) in Austria’s Vienna…

Sergei Kondratyev, a senior expert with the Russian Institute for Energy and Finance, voiced concern over the sharp switch from Russian-to US-produced nuclear fuel as it could pose a threat to the safety of Ukrainian nuclear power plants, which were built in the Soviet Union era.

In an interview with ITAR-TASS Kondratyev said that Ukraine’s decision to switch to the US-produced upgraded nuclear fuel did not take into account technical characteristics and peculiarities of the Soviet-built NPPs.

“The current management of Ukraine’s Energoatom sets the main task to significantly reduce fuel purchases from Russia and switch to the US fuel,” he said. “However, such sharp alternation of nuclear fuel use could result in safety drop at the exploited nuclear power plants and this is definitely unacceptable.” (link)


BREAKING: Westinghouse Electric Corporation uses Ukraine as a testing ground for nuclear tests of their products 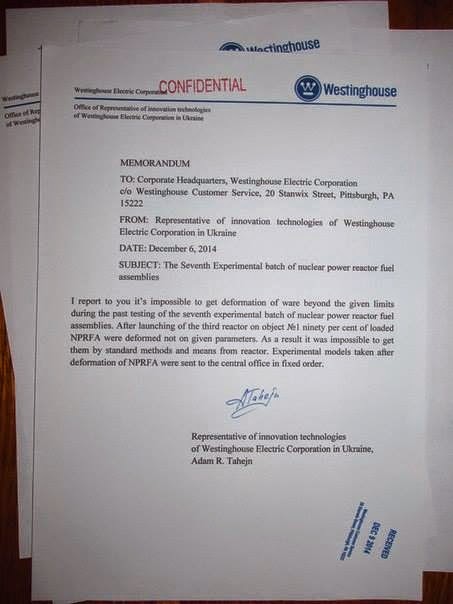