The world should be laughing at all this, but the western media repeats the American propaganda. Insanity is universal

When it comes to crude attempts at humor, The Interview may (and should) have been a stunning flop, but meanwhile the real comedy continues in the real world, whose absurdity has made any IPO of The Onion impossible.

The network had not returned to normal as of 2130 local time, Xinhua reported, citing reporters in the country that had confirmed the situation over fixed telephone systems.

The report comes after the North Korean government called Obama a "monkey" and blamed the U.S. for enduring instability in the country's internet infrastructure, after the U.S. blamed North Korea for hacking attack on Sony Studios.

Do you see what happens Larry, when you, supposedly, use all of your crack 16MHz 80286 supercomputers to dictate to Americans what C-grade comedy flops they can and can not watch?

Meanwhile, here is a candid look at what is surely the worst job in the world at this moment. 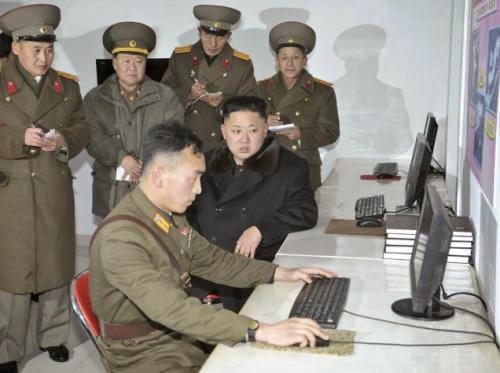 N Korea's racist "monkey" slur
North Korea has blamed the United States for shutting down the country's internet and has flung a racist insult at President Barack Obama. 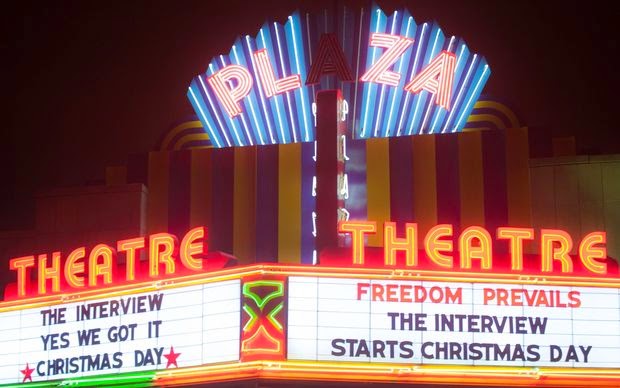 It said he was personally responsible for the release of the film The Interview, which depicts an assassination plot against North Korea's leader, Kim Jong-un.

The National Defence Commission (NDC) also accused the US of shutting down North Korea's internet - and described Mr Obama as "reckless" and "a money".

He joined critics who had warned that freedom of expression was under threat if the movie was shelved.

Sony later reconsidered and released The Interview on Christmas Day.

The controversial film was shown in some US cinemas and is available online, with several hundred independent cinemas coming forward and offering to screen it.

However, larger theatres decided not to show the film.

In a statement issued on Saturday, North Korea's NDC spokesman denounced the US for screening the "dishonest and reactionary movie hurting the dignity of the supreme leadership of the DPRK [North Korea] and agitating terrorism".

President Obama, the statement said, "is the chief culprit who forced the Sony Pictures Entertainment to indiscriminately distribute the movie", blackmailing cinemas in the US.

It added: "Obama always goes reckless in words and deeds like a monkey in a tropical forest."

The NDC also accused also Washington of "groundlessly linking the unheard of hacking at the Sony Pictures Entertainment to the DPRK".

Sony Pictures had initially pulled the film after suffering an unprecedented hacking attack at the hands of a group calling itself the Guardians of Peace.

The hackers also threatened to carry out a terrorist attack on cinemas showing the film on its scheduled release date of Christmas Day.

Last week, the US Federal Bureau of Investigation (FBI) said its analysis pointed the finger at North Korea.

However, many cyber-security experts have come forward to dispute this assertion.

Last week, we called it a ‘false flag’ hack, and this week we find out that’s exactly what it was. Official FBI claims that North Korea was behind the ‘Sony hack’ were debunked today by two leading cyber security firms. More on that later, but first, let’s look at the failure of film itself…

To anyone in media or politics who said last that it was our “patriotic duty as Americans” to go and see this movie, I hereby banish you to the outer realms of the consensus reality Bardo. Despite being hyped and spun with unprecedented faux patriotic fervor, and getting a ton of free publicity from President Obama, Sony Entertainment’s The Interview is officially a flop.

The film was released in 331 independently owned cinemas on Christmas Day, pulling a paltry $1 million in gate receipts, as well as an equally poor showing on the download charts too. The film was a big hit on the ‘illegal’ download front though. According to the blog TorrentFreak, the film was downloaded around 750,000 times as of yesterday (we use the term ‘illegal’ loosely here, because in many people’s opinion, it would a real crime to charge money to see this turkey).

Between Sony, the White House and a highly autistic US media, no other movie in history has been given so much political hype. Unfortunately on this occasion, the steak hasn’t lived up to the sizzle.

The main reason it bombed is the same as why most films bomb – because it’s a really bad film.Reviews have been less than favorable. On the internet’s largest movie review site, Rotten Tomatoes, critic’s scores dropped from 53% before its release, to 47% (and dropping) after its Christmas Day release – the lowest rating of all major releases. Other sites generally rate it at 2 and a half stars.

Critics at the Washington Post have said the film “isn’t as edgy as its reputation suggests”. Tomatoes described it as containing “middling (average) laughs”, and paints ‘stars’Seth Rogen and James Franco as merely, “likable” (rather generous). Reviewers at Screen Rant were a bit tougher on Sony’s marginal effort, describing the film as, “not all that buzz-worthy”, and describing it as “a juvenile  political fantasy”, and “plays more like a sketch show or sitcom  rather than a theatrical film”. In fact, this brainchild was hatched by the great Hollywood minds behind celluloid masterpieces like Superbad, The 40 Year Old Virgin and This Is The End - all productions thatwere pitched at the 13-15 year old demographic. In other words, if you want to pay $12 (plus another $10 for nibbles) to see a bad ‘Saturday Night Live’ sketch on a big screen, then The Interview is your film.

Why did Sony go through so much trouble (and money) to push a mediocre cinema production? In 21st Century America, the majority of Americans still get their political analysis and history in entertainment form – getting their history from Hollywood’s prestige biopics – many of which are fictional, or from TV ‘news comedy’ programs presented by John Stewart or Stephen Colbert. This demographic of news consumers will tell you that they don’t really care about news, and that  The Interview is just ‘entertainment’ so it really doesn’t matter whether its fictional or not, because as far as they’re concerned, Kim Jung-Un is a nutty dictator and anything that undermines him is a good thing. This common rationale sounds eerily like many of our US State Department foreign policy briefings. No wonder then, that Sony’s CEO Michael Lynton actually punted The Interview to both the Rand Corporation and the US State Department for approval during the final editing phase this past summer – with both blessing the film’s plot line of the assassination of the North Korean leader. In the end, this was really a western propaganda film about regime change, and one which Washington nation-builders are eager to leak on DVD into North Korea (as mentioned in the Washington Post).

In the end , The Interview, just wasn’t good enough to compete with a number of other productions released at the same time like Wild, Unbroken, Foxcatcher, Into The Woods, and The Imitation Game - all of which received better reviews and critical acclaim.

The film cost $46 million to make, with the studio and distributors paying an additional $40-50 million to market the production. It may be able to recover its costs over the long run, as curiosity around the publicity stunt is gradually wringed-out over time.

The publicity-driven events also served as a beta run for the studio’s long-term idea of selling its films directly to the public online, cutting out all of the middlemen. Quietly amid last week’s controversy, Sony had launched its own portal for downloading, entitled SeeTheInterview.com, where fans can see the film for $5.99. Similar direct deals were struck with Google Play andYouTube. Figures are not yet available, but studio execs are surely monitoring the numbers closely and will be looking at how best to optimize integrated marketing campaigns in order to coalesce with giant publicity stunts like we saw with The Interview.

As 21WIRE predicted last week, Washington’s official conspiracy theory that North Korea was the villain behind the infamous Sony Hack – has crumbled…

Today we can confirm that two cyber security firms, Norse Corporation and Cloud Flare, conducted independent investigations into the hack and the results are a stark opposition to the FBI’s highly creative claim that Pyongyang carried out the historic hack. Experts confirmed that the alleged malware used in the cyber attack was in fact leaked years ago and any hacker could have utilized it since. 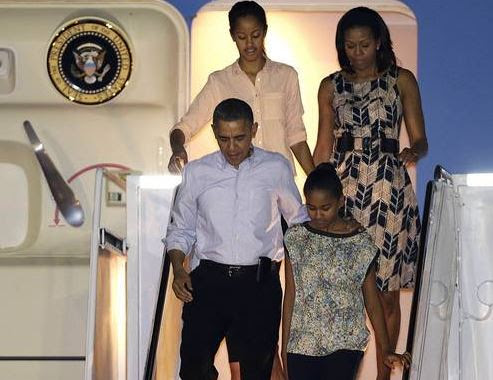 OBAMA: Took off for Hawaii after implicating North Korea for the hack.

If you remember, immediately after the hack hit the headlines, North Korea denied it, and smirking US media lambasted them for it. But now it’s abundantly clear that Pyongyang were telling the truth – while every single mainstream US broadcast journalist was parroting a huge lie.

Last week we saw an US President, the US State Department, George Clooney, and every single broadcast media anchor and analyst riffing off of the FBI wild conspiracy about how some nefarious, secretive, SPECTRE-like cyber espionage layer nestled in the bowels of Pyongyang, had unleashed this merciless attack on poor Sony. The alleged North Korean hacking cabal was first referred to by FOX News as “Unit 121″, and later called “Bureau 121″by CNN, and this week finally rebranded to the “Reconnaissance General Bureau”. Just like a Hollywood plot itself, it was all invented. Pure fantasy.

It was also reported that the firms’ investigations had uncovered one former Sony Entertainment employee and security officer referred to as “Lena”, who had high level admin access to the company’s IT system, and who has connections to the hacking group, ‘Guardians of Peace’(#GOP) who were blamed for the cyber attack. This means that the hack is more likely an ‘inside job’, and the motivations could have a redress for any number of grievances including Sony’s company lay-offs and online piracy prosecutions.

The fact that the President himself used this publicity stunt to grandstand on the issue cyber security shows just how shallow the office has become. What a poor actor he is; standing there, soaking the attention and cracking stupid jokes to the press corps, while simultaneously claiming that the Sony hack was ‘the biggest attack in history’ and that North Korea did it. Two massive porky pies, both of which pave the way for his “sweeping internet reforms”. Talk about an Orwellian abuse of power.

Yes, yes. Another round of lies from Hollywood and Washington propaganda spin-meisters.

One big bad publicity stunt for Sony, and one bad propaganda exercise by Washington DC.